The solicitor’s fees, a sofa and a TV - a combination of important bills and lifestyle improvements were met with the cashback payment 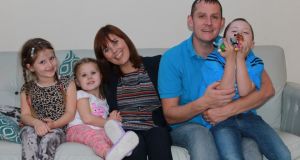 “We spent every penny we had on the renovation and extension,” explains Wes. “We had a fine big extension but we’d nothing in it so we used our cashback to buy a sofa from DFS and a 49-inch flat screen smart TV.”

Val works for Enterprise Ireland as a development advisor. Wes is an engineering manager for a pharmaceutical company. When they switched their mortgage to Bank of Ireland from another lender they’d just completed renovation work and added an extension to the house they had bought in Finglas two years before.
“We spent every penny we had on the renovation and extension,” explains Wes. “We had a fine big extension but we’d nothing in it so we used our cashback to buy a sofa from DFS and a 49-inch flat screen smart TV.”
“It covered the solicitor’s fees as well,” adds Val.
“The cashback actually came through quicker than I expected,” says Wes. “I remember one Friday morning I was logging in online, I wasn’t checking for the cashback particularly, I was going to pay a bill and there was a nice surprise waiting for me. It was €5,000.”
Both Val and Wes grew up in Ballymun. They met 25 years ago at Wes’s brother’s 16th birthday party and used to bump into each other around the block after that. They met again in 1998 at a friend’s 21st and got married in 2004.
When it came to a place to live, the couple got together with a number of other families to set up their own company during the regeneration of Ballymun. The co-op appointed an architect and their house was built with a mortgage from Dublin City Council.
“We were in that house for 10 years but it was never our forever home - it was just to get on the property ladder,” Val explains. When their third child came along, the house no longer suited the family’s growing needs and it was time to move along. After some searching, they found a three-bedroom semi-d which had great potential but needed a lot of work.
“When we bought the house people thought we were crazy because it was in such poor condition,” laughs Wes.
“We ripped everything out,” explains Val. “There was nothing left. We rewired it, re-plumbed it. The roof was alright but everything else was re-done."
“We could see the potential. We were attracted to the area because it’s in a cul-de-sac and the back garden is 100 feet long. So we planned to put in an extension”.
The couple and their three children lived in their new home while the extension and renovation work were being done. It was tough but they were prepared to put up with the disruption to get the house exactly as they wanted it. “We were bouncing from room to room, we had no sitting room, we had no cooking facilities for a few days,” recalls Val.
However they were keen to leave their mortgage lender as soon as they could, after issues with the financing of the renovation work.
“I’m a Bank of Ireland customer all my life,” Wes explains, “and they were offering the cashback. We knocked three years off our mortgage by switching and keeping the same repayments so it was obviously well worth doing.
The couple are ‘absolutely thrilled’ with the house, the extension and the people around them in the area. The three children love the space, and having a playroom on the back of the extension, and there’s still a decent-sized back garden where they have their trampoline.
“Unless we win the Lotto then this is our forever home,” Val says.

Wes and Val received a small gratuity for their time.