The scent of success: how two men chose their own path 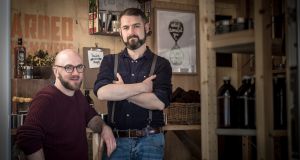 Step into The Bearded Candle Makers’ workshop, and the first thing you’ll notice – before you take in all the surfaces clad in reclaimed wood, or spot Teddy the dog snoozing under the desk – is the smell.

It’s a combination of all the scents concocted by founders Michael Morris and Mark Kelly, from smokey turf to zingy grapefruit and lemon, and it hits you as soon as you enter their studio.

“If I could describe it, and recreate it, I would,” says Morris, who gave up a career in retail to pursue his passion for innovative aromas. “As the melter warms up, the smell just gets better and better – that bit of heat just seems to bring it to life.”

The workspace is located in the garden of Morris and Kelly’s home near Downpatrick, Co Down (tucked behind a “massive beach that no one knows about”), and represents the culmination of three years of creativity, determination and sheer graft.

Every aroma – from the coffee-scented candle inspired by their favourite coastal café, to the specially commissioned Bushmills Black Bush candle, with its rich tones including apple, honey and teakwood – takes two or three months to perfect.

The business has its roots in Belfast-born Morris’ childhood, when family holidays spent camping in the west of Ireland introduced him to two big loves – the great outdoors and, more unusually, scent.

“It was very natural smells, the smell of a forest or woodland – I just had an intrigue for it,” says the 35-year-old.

“I’ve always had a fascination with how a certain smell can send you back in time to a memory.”

There was also the rather distinctive scent of the VW camper van the family travelled in. “It was the smell of slightly damp old curtains, and toast; we were always burning toast ...”

In adulthood, Morris moved away from this early interest and went into steady jobs: first in computers (“I lasted two weeks. I thought, ‘I can’t do it.’”), then in retail.

“I never really found my way until my mum gave me some old school books where I’d written stories about smells. That sort of kick-started the ideal of getting into an industry where scent was involved.”

Entering the already quite crowded candle market, Morris and then-partner, now-fiancé Kelly (who juggles his career in insurance with the business) saw the potential for products with unusual aromas based on stories and ideas, rather than traditional scents.

Before selling a single candle, they spent a year learning about melting, pouring and the science of scent, and buying countless types of wax, wick, oils and containers to perfect their product.

A particular hit with customers is the Real Turf Fire candle, which took even longer to get right than usual.

“In the end we actually created a way of smoking the wax to make it smell of turf. We still have our own scent in there, to give it a bit of a boost, but the smoky smell you get from it is real turf,” says Morris.

“We run a stall in St George’s Market in Belfast and we see the responses straightaway; some people get really emotional when they smell it. It brings back memories of childhood.”

A career dedicated to scent has left Morris with an even more heightened sense of smell – which can have its downsides. “It’s like a muscle that gets stronger and stronger. The longer I’ve been doing it I definitely have noticed an increase in what I smell and pick up – it’s unfortunate when they’re spreading slurry in the fields!”

About ten months ago, Morris decided to give up his day job as a retail manager. It was a bold move, but he insists he had no fear. “It was the best feeling ever. It felt so natural. When the momentum is there you just have to go with it.”

I choose what I do each day and live well,” says Morris. Having that choice, being able to choose how to use your time is a sign of success for me.

It’s this drive and focus on staying true to themselves which led to the pair’s collaboration with Bushmills.

“When Bushmills started out all those years ago they were doing their own thing, their own way, and doing it through passion,” says Morris.

“I think they recognised the same resilience in us, and that we were trying to do something different.”

Today, Morris is working harder than he ever did in his old job, with interest from stockists in Tokyo, New York and Australia.

But every day he makes sure to step away from his beloved workspace and take springer Teddy (a favourite with The Bearded Candle Makers’ Instagram followers) for a bracing beach walk.

If there’s time, he might even head to the Mourne Mountains for a hike, or out west to surf at Strandhill, County Sligo. “I choose what I do each day and live well,” says Morris. “Having that choice, being able to choose how to use your time is a sign of success for me.”