Who are the ‘Leaders of Tomorrow’?

Accenture’s established accelerator programme, now in its 10th year, has taken on a record number of young entrepreneurs who, says country managing director Alastair Blair, tend to be ambitious risk-takers 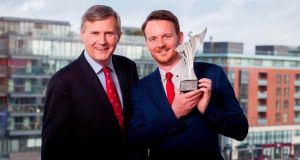 The 2016 winner of Leaders of Tomorrow, Vincent Forde, with Alastair Blair, managing director of Accenture

With so many young innovators setting up businesses and making them a success, there has never been a better time to show entrepreneurial spirit in Ireland.

This may be one of the reasons why Accenture’s Leaders of Tomorrow (LOT) competition has become so popular since its inception ten years ago.

Naming tech billionaires and co-founders of Stripe, John and Patrick Collison, and Eoghan McCabe, one of the co-founders of Intercom, country managing director of Accenture Ireland, Alastair Blair says young entrepreneurs are less afraid to take risks and now have heroes to emulate.

Since Leaders of Tomorrow was set up, it has gone from around 30 applicants in its first year to a record 240 this year. The competition asks students and graduates to pitch an idea or product to Accenture senior management before eight are chosen to go through to the final round of judging on March 30th.

The prize includes a €5,000 cash injection to the winner’s start-up, as well as a highly-coveted place on the NDRC LaunchPad. Winners will also be taken on a leadership and innovation tour to one of Accenture's Global Innovation Centres.

Gary Leyden, commercial director at the NDRC, says “As an investor in early-stage digital technology start-ups, NDRC is focused on growing digital entrepreneurship in the country. We believe Accenture’s Leaders of Tomorrow programme really ties into this vision of ensuring digital entrepreneurship becomes embedded in the culture of the economy. NDRC has been delighted to be able to offer the winning entrepreneur a place on our investment programme over the last four years.”

Blair says they started the competition with a desire to identify leadership characteristics in people. “We were looking in the graduate marketplace for a diverse mix of technology and business people but we also wanted people who had an ability to stand on their own two feet and had done something over and above their college course.”

The premise is that participants have a business idea, present it and then move through to the elimination rounds, all the while getting encouragement and mentoring from Accenture.

Last year’s winner, Vincent Forde, founder of Gasgon Medical, is currently seeking a patent for his product and Blair says his idea is “just brilliant”.

“We have reached a point where they are bringing a product to fruition. I think there is a massive difference from 10 years ago in terms of the entrepreneurial spirit and the willingness to give a business idea a go and for it to fail or succeed. Ten years ago you’d see people wanting to work in a big firm, now they are willing to say this is my idea and run with it.”

Speaking about the competition, Forde says, “I learned that I can generate a business that has potential globally and that there are willing supporters here who are enthusiastic and engaged in making my business ambitions become a reality.”

So why are so many young people currently showing such entrepreneurial flair?

“Necessity is the mother of invention and in a downturn people have to go and make something of something and are much more willing to try,” Blair says.

“Secondly, the number of tech companies that have come and set up here, particularly Silicon Docks, opens up all sorts of possibilities and there’s a belief people can work for these companies for a period and leverage the skills and experience.

“Thirdly, there is a better infrastructure in place and a better understanding of how to get investment.

“Lastly, a lot of these businesses don’t have the same costs of distribution. Groopeze (previous Leaders of Tomorrow winners) is basically leveraging social media to get its product out to market and the cost per click is tiny.”

Supporting this, Peter Cleary, Leaders of Tomorrow programme manager, said: “I first became involved in the Leaders of Tomorrow award in 2011 because I wanted to work for Accenture and this was a different way of getting them to notice me. Now, applicants want to roadtest their ideas, build on their dreams and more of them are creating successful businesses in their own right. I’m hugely proud to be part of a programme that began as a recruitment tool and has evolved into a leading hotbed for great business ideas and idea makers.”

Another very heartening aspect to all of this is the number of women now taking part, compared to a couple of years ago when only a handful did.

Out of 240 applications this year, 48 per cent of those were women

Out of 240 applications this year, 48 per cent of those were women. That percentage was no more than 10 per cent three years ago.

Strategic events design company Connect the Dots were finalists in 2016. “Accenture demonstrated that they really believed in what we do by commissioning us to re-imagine their Leaders of Tomorrow women in entrepreneurship event. As Connect the Dots, we deliver high-impact events through our distinctive co-creation process,” Marisa Denker and Naomi Murphy of Connect the Dots say.

“We applied this process to Accenture's event, engaging with attendees long beforehand and using their insights to design a bespoke event that was meaningful for all involved. Because of its tailored nature, the event encouraged a large increase in women applicants to Leaders of Tomorrow.”

The competition is also seeing a record number of applicants from overseas.

“Ten years ago we might have had one application from abroad, but this year we’ve had applications and submissions from a joint Irish and European team, France, Italy, India, Hungary and the UK, so this programme has become a proper multinational programme,” Blair says.

In terms of the types of start-ups Accenture are seeing, Blair says previously it would have been centred around more service-based companies. Now they are more product-based.

He says there are three things he would like to see evolve from this year’s competition and they are ideas or products that will make a difference to people’s lives in the coming years: “The whole area of Artificial Intelligence; 30 years on from the first manifestations of this it’s now getting real and we can see the benefits of it to people’s lives, virtual reality - in terms of security and policing - is a second area and the internet of things as a third. I think we’ll see lots of ideas here.”

Of course, following on from the competition many do go on to work for multinationals, and Laura McGreal, who was part of the winning team in the competition’s inaugural year (2008), went on to work at Accenture after participating in the programme. Speaking about her experience, she says: “I learned so much from senior business leaders and got to visit Bangalore, New York and Cannes to see how different economies and locations support innovation and growth. It really was an eye-opener at such an early stage in my career.”