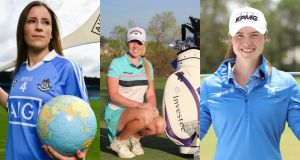 There’s no way of knowing if having a female footballing hero would have encouraged her to keep going. The fact is, she didn’t have one.

That lack of visible female sporting role models is part of what inspired her to co-found 20x20, a new initiative aimed at promoting females in sport.

Set up by Thornton and her business partner Sarah Colgan, with whom she runs creative agency Along Came a Spider, the aim of 20x20 is to boost female participation rates by 20 per cent by 2020 as well as to boost attendance at women’s games and increase media coverage of women in sport by 20 per cent by 2020. Part of this involves encouraging the media to increase coverage of women’s sports and the public to attend more women’s sporting events.

The campaign is backed by the Federation of Irish Sport who have played a lead role in bringing the support of Ireland’s sporting governing bodies, such as the FAI and GAA, as well as local sports partnerships across the country.

It launched in October and “just snowballed,” says Thornton, helped in part by the huge public interest in the achievements of the Irish women’s team in the Hockey World Cup.

Part of 20x20’s mission is about promoting female sporting role models of the kind Thornton missed out on in her own childhood. It has a panel of five ambassadors, each supported by the campaign’s corporate sponsors AIG, Investec, KPMG, Lidl and Three.

Golfer Stephanie Meadow is Investec’s 20x20 ambassador. She turned pro four years ago, at the age of 22. The Jordanstown native grew up riding horses – her mum’s hobby – and playing golf – her dad’s.

Ultimately, she opted to focus on the latter, despite its inherent gender imbalance. “There was a female group at Ballyclare Golf Club when I started out and that really helped because it made me more comfortable,” says Meadow.

“Golf is played mainly by boys and I just got used to that fact. It might have been part of my personality but I was able to say ‘I’m going to play against the boys and beat them anyway’ but I can understand, looking back, why so many other girls didn’t feel comfortable. Many of them turned away from golf. Some took up other sports, and some fell away from sport altogether.”

“Nowadays I can see the importance of role models. In terms of Irish professional women, I had none. Now there’s me and Leona Maguire, who recently turned professional. And if you go down a few years you can see there are lots of younger girls coming through, so you can really see the knock-on effect of having a role model.”

In the world of work, women have long been exercised about the importance of equal pay. In the world of sport, it will only happen if people get out and support women’s sport.

“The only way we will ever come close to getting equal pay is if spectators support women’s sport because it’s all about the brand and the TV ratings,” she says.

Such spectators will also come to appreciate – as fans of Irish athletics and, now, the Irish women’s hockey team already know - that female sport is every bit as worthy of celebration as men’s. That in turn will encourage more girls to take up sport and, crucially, stay in the game.

“For me, 20x20 is a way to give back. Anything I can do that helps support younger girls coming through, I’m thrilled to be involved in,” she says.

Dublin senior camogie player Laura Twomey feels similarly. She did a PhD on the negative impact of physical inactivity and, as a teacher of PE in a girls’ school in Dublin, knows firsthand how many give up sports in their teens.

Over her 11 years on the Dublin team, her awareness of the gender imbalance of sporting coverage has grown.

“In the first few years you’re so immersed in getting on to the panel and working your way up that you don’t think about it,” she says. “Coverage did increase this summer but only in the latter stages, the knock out stages, so nobody tuning in would have a clue what’s going on. On top of that, coming back after a championship game, where we’d have had the TV cameras, to see just two minutes of it at half eleven at night – it’s frustrating.”

Sport is sport - so don’t differentiate

Raising the profile of women’s sport will strengthen the talent pipeline. Conversely, by not promoting women’s sport “you’re only going to get those players who are intrinsically motivated, that don’t have need of a role model to help them to see what they can be. But the majority of girls are affected by that lack of visibility. And when there is no one to look up to, giving up becomes that bit easier.”

Parents have a huge role to play. “I was lucky in that mine were always extremely encouraging. It’s realising that kids don’t all have to play at a very high level, that there’s a type of sport for everybody, but that they just need to be exposed to it to find it,” she says.

For parents, one way to help their own girls is to get out and support someone else’s. “It requires a shift in decision making, to make the effort to bring your child to a game,” says Twomey.

“Then it will be a virtuous circle – the more people come to women’s sports, the more participation in women’s sports will rise. Everybody has a responsibility in this. After all, sport is sport - so don’t differentiate.”

Introduced to the game by sports fanatic and dad Declan, Leona graduated from Duke University and, along with twin sister Lisa, has recently turned professional.

What does she think of the 20x20 initiative? “Sport is a big deal in Ireland and we have always admired our sporting heroes, and the whole public gets behind them. The ambition of 20x20 to promote women in sport is a great way of helping ensure the development and profile of so many talented people. I always feel the whole country is in better form when we are doing well, regardless of who it is or the sport involved,” she says.

Maguire singles out the Irish Ladies Golf Union (ILGU) and its role in helping promote the game. “I’ve been fortunate to benefit from many of the ILGU programmes from an early age, and their role in promoting the game for girls and women across the island has been hugely valuable,” she says.