While some jobs in the auto industry will disappear, there will be many opportunities for job-seekers with IT skills 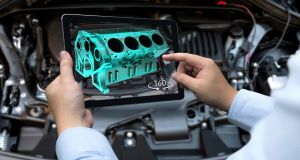 There is a trend towards more IT-focused roles in the auto industry. Photograph: iStock

According to Prof Venkat Venkatraman of Boston University Questrom School of Business, today’s modern automobile runs on 100 million lines of software code, with sensors, software and cloud connectivity as the new core competencies required of the car makers. In addition, various manufacturers such as Daimler, GM, Ford and others are now beginning to experiment with transportation as a service to complement their historical business models focused on designing and delivering automobiles.

This is the shape of things to come in the auto industry. The car of the future may be self-driving, electric or both. Ownership may be shared by individuals, businesses or sophisticated pooling services. Jobs will almost certainly disappear in some areas but many more will be created in other areas of the supply chain.

Seat is already at the vanguard in the creation of these new job opportunities. “Future mobility is a major topic at the moment that we take very seriously, so much so that we have created a new company called XMOBA with the main goal in identifying new trends and business models and implementing projects through investments or the development of initiatives that offer solutions to current and future mobility challenges,” says Neil Dalton, head of marketing with Seat in Ireland.

“XMOBA is beginning its activity by spearheading two major initiatives,” he adds. “One is ‘justmoove’, the first project launched that will be available to all drivers. It is a platform that integrates a set of services for users to reserve and pay for parking, tolls and refuelling, among other options. The other, the carsharing company Respiro recently acquired by Seat, will become wholly owned by the new entity, which will centralise and coordinate its activities. Not only will XMOBA offer its services to Seat users, but it will also develop compatible solutions for the general public.”

BMW is another company which is creating new jobs as a result of the changing technologies in its vehicles. “If you look at BMW from a global point of view, we are engaged in a very large recruitment effort for new skills for the cars of the future,” says Mark Bradley, head of business with Frank Keane BMW. “We are looking for new talent and new skillsets. Automation, connectivity, shared mobility, and electrification are the key areas for the future. These are known collectively by the acronym ACES in the auto industry.”

He says the whole industry is changing and relies on innovation to remain competitive. “Traditionally, BMW was focused on building better engines and better cars. In the future, we have to look at the digital aspect as well. We are going to see major changes in areas such as shared mobility and different usage and ownership models. I don’t see it as meaning we will have fewer cars on the road. If the kind of innovation happens that we expect we will be using more vehicles more often. That will mean more manufacturing jobs, more jobs in maintenance and so on. If you look at pool cars, they used to be a big thing. They always got more use than privately owned cars. Shared mobility will create lots of job opportunities in areas like management, cleaning, maintenance and so on.”

Shane McHugh, M2M and IoT business product manager with Three Ireland, believes the car industry is going through a fundamental shift in terms of technology. “Some jobs will be lost and some will be created,” he says. “We are starting to see how car-buying is changing. Audi has already brought augmented reality into it. Customers can put on virtual reality goggles to get a view of the car.”

This isn’t the only area where virtual reality is coming into play. “Virtual reality plays an essential role in every development stage of a new car,” says Dalton. “Some 95,000 simulations were performed in the case of the new Seat Ibiza, twice as many as for the previous generation of the car. Among other tests, virtual collisions are staged so that future cars are safer than ever. During the approximately 3½ years of development that go into a car, up to three million elements are analysed using simulations, a figure which was limited to about only 5,000 30 years ago.”

McHugh points out that we are already seeing jobs growth in Ireland as a result of these developments. “We might see fewer cars being manufactured but we are going to see greater investment in new technologies like virtual reality and autonomous driving. Jaguar Land Rover is committed to creating 150 jobs in Shannon in the development of autonomous vehicle technologies. The company plans to establish a test bed for autonomous vehicles in the west of Ireland.”

He believes this is just the beginning of a trend towards more IT-focused roles in the industry in future. “They are talking about V2X connections now, that means vehicles connected to anything. We will see V2V – vehicle to vehicle, V2P – vehicle to people, V2N – vehicle to network, and V2 infrastructure. Autonomous vehicles may remove the driver but will require IT-focused jobs to make it happen.”

The technology will also move beyond the car body. “Cars will have predictive maintenance technologies which will allow dealers to have more proactive relationship with car buyers. They will be able to gather data from cars and gain insights from it. The whole ecosystem will change, and we will see the advent of services like usage-based insurance as well as insurance based on driver behaviour. This will enhance road safety.”

But there will be challenges to face in this bold new world. KPMG’s 2018 Global Auto Survey found that more than half (56 per cent) of global auto executives believe the number of physical retail outlets as we know them today will be reduced by 30 to 50 per cent by 2025. The premise is that as mobility patterns change, customers are seeking more intelligent mobility solutions instead of owning a private car. Almost half (43 per cent) of respondents believe that half of the car owners they know today will no longer want to own a personal vehicle by 2025.

“The impact of technology on the auto industry continues to gather pace at an exponential rate and the implications go far beyond that sector alone,” says Michele Connolly, head of corporate finance with KPMG in Ireland. “For example, how we plan our infrastructure to cope with driverless or autonomous vehicles, how we fuel and recharge such vehicles and how we plan, fund, build and operate the required infrastructure are significant issues for Ireland. We must have a meaningful public policy debate on these matters or we will quite literally get left behind.”

Also in Tech on Wheels

Technology to eliminate driver from the equation already exists

Research pushes towards next landmark in operation of cars

Leading the charge in electric cars

Electrics and hybrids: Eight of the best

The connected car: is this the future of driving?

Irish motorists not feeling the buzz of the electric car

Six of the best tech features already available to buyers

In the race to deploy driverless public transport, Singapore builds a mini town