Diversity is now the number one element driving investment

‘Because interest rates are so low for money on deposit, people are looking to see how they can make their money work for them’ 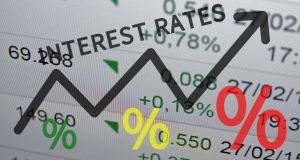 With deposit rates standing at almost zero per cent, putting money on deposit is like putting it under the mattress

With interest rates for money on deposit historically low and economic indicators increasingly positive, the case for taking savings to the “next level” by investing them is strong. After years of recession and paying down debt, the appetite to do so may be strengthening too.

“With the European Central Bank’s headline interest rate having remained at 0 per cent since March of last year, it is no surprise to find that conventional deposit accounts are offering such low rates of return,” says Gerry Gallen, senior manager at Moneycorp Ireland.

“When one considers that there is Deposit Interest Retention Tax (Dirt) payable on any interest earned at a rate of 39 per cent, it is clear that savers are not getting much bang for their buck.”

But negligible deposit rates on the one hand are meeting growing consumer confidence on the other. Both household debt and unemployment are falling, while new car registrations, a traditional economic bellwether, are on the rise - up 17 per cent last year.

Increased confidence may be encouraging consumers to revisit their financial strategies too. “Because interest rates are so low for money on deposit, people are looking to see how they can make their money work for them,” says Darragh Lennon, director of retail products at KBC Bank Ireland.

For anyone who has built up savings, it may be a good time to consider hiving some of these off and putting them into an investment vehicle.

“If you are trying to build up a nest egg for retirement, or for a property purchase, you can aim to do that by investing,” he says,

One of the main barriers to investment however is a misperception about what is involved. “Sometimes people think investment is only for the rich, or involves large sums of money,” says Lennon. In fact, KBC has investment products open to those willing to put aw ay just €125 a month.

Neither does investing automatically mean locking money away for long periods. “We offer investment funds with daily liquidity, so you can take your money out whenever you need it,” says Lennon.

The fact that deposit rates are low may be discouraging consumers for shopping around for the best home for their hard earned savings on the basis of “what’s the point?” “People are definitely saving but probably not investing,” says Brendan Barr, head of investment solutions at Standard Life Ireland.

“This is despite the fact that deposit rates are at almost zero. At that level you would expect to see a bigger shift to investment funds, but no. It’s one of the surprising facets of the market right now and I think it is still down to a general lack of confidence on the part of investors. If interest rates were at 4 or 5 per cent you’d understand there would be a need to make a stronger case for investing, but with deposit rates standing at almost zero per cent, putting money on deposit is like putting it under the mattress.”

In the current environment, it makes more sense than ever to figure out just how much cash you need to hold on deposit and take a longer term view with the rest by investing it, he says.

“Money on deposit is a single bet, just as putting all your money in one stock or in property is a single bet and, as such, is not to be recommended,” says Barr. Where people are investing, the main legacy of the financial crisis is the realisation that putting all your investment eggs in one basket – whether bank stock or investment property – is not such a good idea.

“Diversity is now the number one factor driving investments and that is one element of the market that has changed,” says Barr.

The bulk of investments at Standard Life Ireland today are earmarked for diversified portfolios, most often in multi-asset funds that invest across a range of asset classes. “That has been a really positive trend in recent years both for markets and for investors. Ten years ago it would have been all about property funds. Today it’s all about diversity.”

The past two years has seen an increase in the number of people looking “to put their money to work for them”, says Brian O’Reilly, head of the global investment strategy team at Davy.

“We are seeing people getting back into equity markets, bond markets and even property investment but these days property is not about never-ending growth so much as an increased income play, with average yields of around 5 per cent that would be hard to come by on deposit. The demand is very much for income-protecting products, so, for example, with equities, people aren’t looking for the next Google so much as they are looking for blue chip stocks providing dividend yields of around 4 per cent.”

There is an appreciation among investors that in order to achieve any greater returns, they are going to have to take on more risk but the main concern among investors is ensuring they don’t have too narrow a focus.

“The big trend is towards multi asset funds. It’s all about diversity these days. Lessons have definitely been learned as a result of the crisis.”