This year’s celebrations of Pride will be restricted by Covid, but will be spectacular nonetheless, reports Sandra O’Connell 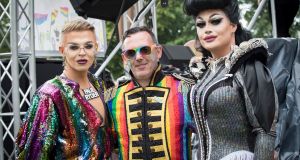 Covid-19 means Pride parades in 2020 are different to anything we’ve seen before. That doesn’t mean they won’t be fabulous.

Dublin LGBTQ Pride has launched the first-ever Digital Dublin Pride Festival, with a fully interactive virtual Pride Parade and a Pride Concert, taking place June 18 to 28 entirely online. “It has been a challenge

but also, it has helped our community to think outside the box,” says organiser Eddie McGuinness, who is co-hosting the event with drag artist and presenter Paul Ryder. “We mightn’t be able to be on the streets but we’ll be in everybody’s homes and in doing so, we’ll be able to get a wider message about the diversity in families.”

As ever, inclusivity is at its heart

“We are encouraging people to make their own Pride Parade, in their houses and in their flats, in their streets and on their farms, you name it. We’re expanding what St Patrick’s Day did and putting a rainbow on it.”

The event was launched in the grounds of Dublin Castle on the fifth anniversary of the marriage referendum. The theme is ‘In This Together’ and the grand marshal of this year’s virtual parade is “all frontline workers”, he says, represented by Vanessa O’Connell, the sign language expert seen in the chief medical officer’s nightly Covid briefings.

A packed online schedule includes everything from political debates to pet shows and once normal service has been resumed, what the organisers have learnt this year will only enhance Dublin Pride in years to come.

“We are not afraid to say we still don’t even know if there will be a parade next year but we are already gearing up to make it the best ever, using the best of technology and bringing that to what we do,” says Mr McGuinness.

Being the independent-minded place it is, it’s perhaps no surprise to find that Cork is planning for its events to take place live and in person. It has moved dates from its traditional slot on the August Bank Holiday to September 19 to 26, to give organisers time to prepare its new, socially distanced, format.

“The Pride committee is working hard to ensure that all events are safe and is re-imagining and re-engineering them to make sure they are,” says chairperson Clive Davis. A Pod Parade will comprise socially distanced groups walking, in cars decorated for the occasion, or on bicycles. “We want to bring colour to Cork and all the excitement back in a safe manner. Actually, we just can’t wait.”

The Cork Pride after-party is to be a drive-in

“We have a major international headline act confirmed to play and will have all our normal food stalls there, with maybe an app people can use to have their food delivered by volunteers to their car.

“We will also have all our health and wellbeing events, which is so important right now as some members of our community have been isolating in places where they cannot be themselves because maybe their family members don’t know they are LGBTQ+. For some it’s like going back into the closet, it’s so hard for them.”

The theme of Galway Pride 2020, August 10 to 16, is ‘Ní Neart Go Cur Le Chéile’ or ‘Strength in Unity’. Not only does this “encapsulate the times we’re living in but the long-standing tradition of the LGBTQ+ community standing together in tough times,” says Owen Hanley, one of its organisers.

“We will be incorporating a number of digital events into Galway Pride but there are also some significant events that take place each year that we feel can still be done in person, even if there is no crowd there to see it, such as, for example, our flag-raising. We’re the longest consecutively running Pride in the country. We have been running for the past 31 years, since 1989, when 10 people ran down Shop Street because they were so terrified. We think it is important that people see the Pride Flags down go down Shop Street.”

The parade is always about giving something to the community but also about bringing the LGBTQ+ community to the wider public too, he says. “So virtual pride events will take place but if there is any way we can maintain our physical presence we will too.”

“There are no physical or geographic restrictions, for a start,” he says. “We will also have our mental health talk, which sees one of the biggest turnouts each year. Last year more than 100 people came for it and then afterwards brought candles to the vigil at the flag stand, to honour members of the community we have lost, including by suicide, but also to celebrate.”

Last year 60,000 attended and this year organisers had predicted a bounce on foot of the enactment of its same sex marriage legislation in the North, says organiser Sean O’Neill Belfast Pride. Instead it too has gone digital, from July 26 to August 4.

“We had 165 events last year, more than any Pride in Ireland. It’s about affirmation and positivity and this year positivity is more important than ever,” he says.

The annual Belfast Pride Awards will be held online “to broadcast quality”, he says. “The fact that we streamed the parade last year has helps because we’re quite used to it now. We’ll also be running our Pride Talks Back political debate online.”

A documentary about Belfast Pride’s 30-year history will be launched while the two-hour Party in the Square will take place online. “The banter and the fun will all still be there. Belfast has always been a mixture of celebration and protest, and that will continue through to online.”

Feedback has been good on the Covid friendly plans. “One commenter on Facebook said they were relieved that being gay hadn’t been cancelled for this year,” he says.

Earlier this year Kildare launched its first Pride, only to have to promptly go digital before it took place in May. It was a huge success, according to organiser Julie Buckley. “People really got on board, we received video submissions from Belfast to Cork and all in between, and people of all ages. Covid has affected the LGBTQ+ community like others in many ways, but to allow young and old people to see an open and accepting community on their social media page was important to us. It could inspire some and help others and that’s all we want to do,” she says.

Last year was Carlow’s first ever Pride and although this year’s has been cancelled due to Covid, its positive impact is still being felt. “Only last week I got an email from someone who said last year’s parade was transformational for him

Get your Pride on this summer

The first ever Digital Dublin Pride Festival is bringing it all back home, to your home, this month, with a fully interactive virtual Pride Parade taking place on Sunday, June 28th.

Expect a fantastic mix of pre-recorded and live elements from hosts, Paul Ryder and Eddie McGuinness, led out by front line workers from across the city.

The Virtual Parade will be broadcast live from 2pm, through Dublin Pride’s social media channels or by going to dublinpride.ie/live.

Stay tuned for the Dublin Pride Concert, which takes place afterwards, at 7pm.

In Cork, the rescheduled Cork LGBT+ Pride Festival will take place live and in person from September 19-26, in accordance with HSE guidance at the time.

Athleticos won’t want to miss the Cork Pride Frontrunners Rainbow Run, the only Frontrunners event to take place in Ireland this year.

The Family Fun Day is scheduled to take place in Fitzgerald’s Park and with live music, children’s entertainment, the Gay Olympics and artisan food village.

The Cork Pride Gaze Film Festival Movie Night will take place in a venue large enough to allow social distancing. Welcome to the Community — Cork Pride Festival’s coming out evening — will see well-known figures and high profile speakers share their personal experiences while Work With Pride, a diversity and inclusion conference, will take place both physically and via live streamed webinar.

This year’s main event will be the Pride Pod Parade, made up of socially distanced groups in cars, on bicycles, and on foot in small groups.

The Cork Afterparty, a drive-in event, takes place at the Port of Cork, on the plaza in front of the old Odlums building, with DJs, celebrities, drag queens and entertainment from a major international headline act.

The first ever digital Belfast Pride Festival takes place from July 26 to August 4, with both the parade on Saturday, August 3rd and the Party in the Square streamed live.

And don’t miss Global Pride, which takes place worldwide on June 27th, and was developed in response to the fact that Covid has forced very many Prides off the streets around the world this year.

It will see some of the world’s estimated 1500 Pride organisations come together to stream 24 hours of content, including musical and artistic performances, speeches from activists and campaigners, and addresses by public figures, all designed to reflect and celebrate the diversity of LGBTQIA+ people everywhere.