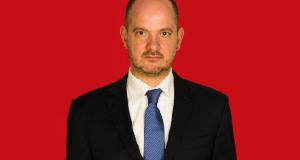 Artist Silvio Severino lives in Cork and his work is collected by art lovers globally.

Silvio Severino’s love affair with Cork began in 2017 when he moved to the Rebel County with his partner, Pascal.

From Zurich to Brussels, the couple have spent years living in various European countries and three years ago, a job opportunity moved them to Ireland, a place Severino hopes to stay for “many, many years”.

Growing up in Porto Alegre, South Brazil, Severino lived a life of oppression under military dictatorship. At this time, the government eliminated the democratic rights of political and cultural organisations, signalling an end for sexual liberation and queer rights.

We didn’t have any freedom in any form, especially our sexuality

LGBTQ people were seen as criminals, having their sexuality and gender identity seen as an attack on morality and a danger to the ‘good citizens’ of the State.

“We didn’t have any freedom in any form, especially our sexuality,” he said. “You couldn’t live your life free and open.”

Heavily influenced by the beats of British pop music, Severino, the holder of an Italian passport, saved up and made the decision to immigrate to London in 1999. “London has always been a place I have a strong connection with, that inspires my imagination,” he said.

“It was a fantastic starting point to my journey in Europe. Shortly after I arrived, and much shorter than I expected, I moved with my partner to Zurich, Switzerland. Seven years later we returned to London and I finally got to enjoy the full London experience. I spent five years in Budapest, then a short time in Brussels before moving to Cork.”

It’s easy to make friends here. You can go to one of the many art shows/openings around the city

In Zurich, he became very interested in photography, and being able to get lost in these new cities with his camera helped him integrate into multicultural societies and delve into his art from experiences.

Each place has had a significant influence on his work and growth as an artist, but one that stands out is Budapest, with its inspiring architecture and natural light. This is where he took part in his first Pride parade, an event which at the time saw army officials lining the streets and taunts from anti-gay protesters.

He says Cork is one of the friendliest cities in the world and loves the community of strong friendships he has made here.

“It’s easy to make friends here. You can go to one of the many art shows/openings around the city, begin talking to other artists and like-minded people, connect on Facebook and it goes from there,” he said. “I’ve never felt any homophobic or xenophobic problem in Cork. My personal experience has been extremely positive. Everybody knows we are together; we live a very open life here.”

Ireland is going in the right direction

Through conversations with his friends he has educated himself on the evolution of the Irish LGBTQ+ community, pre the Marriage Equality referendum in 2015, and commends the younger generation for “taking things into their own hands”.

“Young people rejected the morals and hypocrisy of the previous generation. I admire them for that,” he said. “Each country evolved but at a different pace. I used to see Ireland in the news and I’m so impressed at how much it has evolved in such a short span of time.”

He praises the outreach the community has in Cork such as the Gay Project (www.gayproject.ie), whose mission is to ensure that gay, bisexual, men who have sex with men (MSM), trans, and queer men are enabled to participate fully in Ireland’s social, economic, cultural, political, and artistic life. They undertake this with workshops, talks, resources, events, and social groups, 365 days a year.

Earlier this year, Severino partnered with them to host a multimedia exhibition about masculinity and queer identity.

Titled ‘I Kissed A Boy and I Liked It!’, after the lyrics from the Bristol-based punk band Idles, the exhibition deconstructed the male form and through various visual mediums, challenged narratives around stereotypes of what constitutes the ideal masculine body. It was a piece reflective of his childhood in a conservative culture that enshrined hyper-masculinity.

The exhibition was meant to take place in the project’s space in South Terrace but moved online due to Covid restrictions. It was well received, reinforcing Severino’s view that Ireland ranks among the most progressive countries in Europe. He highlighted the disparity between Ireland and his home country of Brazil, which he said has regressed under president Jair Bolsonaro. “Things are much worse now comparing to 20 years ago when I left Porto Alegre,” he said.

Brazil has one of the world’s highest rates of violence against gay and transgender people.

He urged Ireland to keep on doing what it’s doing — talking about all LGBTQ+ issues, showing support, and starting conversations with those who may be living in less multicultural and diverse places.

“Ireland is going in the right direction,” he added.