From increased flexibility to pay rises, here’s what to expect in 2020 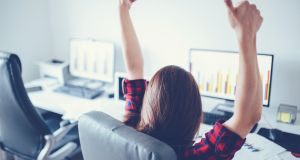 Expectations for a pay rise are high among Irish workers in 2020 but don’t go mad – the average pay increase forecast is just 2.64 per cent. Photograph: iStock

The drive for machines and software to take over routine, repetitive and rules-based tasks is gathering pace inexorably, freeing up humans to concentrate on higher value-added activities. That’s the theory anyway and in a tight labour market it makes good sense. How it will work out in a downturn is another question. In the meantime, sites such as willrobotstakemyjob.com are a nifty way of discovering how likely you are to be replaced. Cheeringly, it gives journalists only an 11 per cent chance of being usurped by a bot. For computer programmers, it’s 48 per cent, just rewards for designing themselves out of existence. In the meantime, expect to see the rise of augmented intelligence, where computer systems help boost human performance. Already, call-centre software systems can prompt staff to show more empathy. How head-melting is that.

This has become the key watchword for the workplace and cleverly covers a multitude. It comes out of diversity and inclusion programmes and can include everything from à la carte working hours and locations to whether or not you can adjust your desk height. Surveys have shown that the kind of flexibility workers most appreciate is that relating to start and finish times. Also on the rise are increased opportunities to work remotely, whether from home or a coffee shop, as well as greater opportunities for part-time work or job-sharing. According to a Eurobarometer survey, just under half (47 per cent) of Irish workers have used flexible work arrangements of some sort but a quarter said there were no flexible work arrangements available at all in their organisation, so there’s plenty of room for adjustment.

Workplaces are increasingly designed to be flexible for employers too, particularly in their growing demand for short-term or ‘atypical’ workers such as freelancers, consultants and other self-employed professionals who work with organisations on a project basis. It is the rise in this type of worker – there are currently 41 million of them in the US, predicted to rise to 47 million in the next five years –that has powered the growth of shared work spaces, for example. This growing class of worker is a lever employers can use to scale up and down as required by the agile work culture demanded by the fast pace of technological change. It’s also part of the ongoing significant shift in the social contract that ensures workers shoulder all the risk. It’s understandable in start-ups and legacy businesses operating in disrupted sectors, but less so for industry giants sitting on hoards of cash.

Ireland is still home to The Young Europeans of old. According to Eurostat, the European statistical office, Ireland is the most youthful nation of the EU28, with people under 30 accounting for 39.5 per cent of the population. (Amazingly, child-loving Italy has the lowest, at 28.8 per cent.) Children account for more than one in five (21.9 per cent) of the Irish population. That’s the highest share among EU member states. They account for just 13.2 per cent in Germany, for example. That all bodes well in terms of a talent pipeline for employers here but doesn’t change the fact that one of the biggest shifts they are facing is the rise in the working age. Not alone is the State’s official retirement age on the up but healthier, active, and in a significant number of cases pensionless, workers will expect to work for longer. As age discrimination makes it harder for company policies to boot people who don’t want to go out at 65, organisations will have to ensure this growing cohort of older workers is fully included in their diversity and inclusion strategies.

The good news is we can all expect a pay rise. According to employers’ group Ibec’s trends research, more than three quarters (77 per cent ) of respondents to its survey expect basic pay rates to increase in 2020. Maybe don’t book that new car just yet – the average pay increase forecast is just 2.64 per cent.