Green and clean: working towards a sustainable future 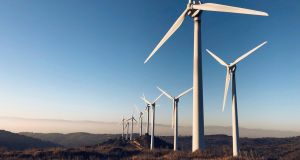 Companies are attempting to atone for past environmental mistakes and build a more sustainable future while still growing their business. Photograph: iStock

Until very recently, the words sustainability and big business did not even belong in the same lexicon, let alone the same sentence. Yet the two are no longer mutually exclusive, as industry attempts to atone for past environmental mistakes and build a more sustainable future while still growing their business.

Many major US firms with Irish bases are making giant strides in their efforts to create a more sustainable business model, with innovative projects and initiatives a major focus of their business planning in both the short- and longer-term.

These endeavours are critical, says Prof Andreas Hoepner of the Smurfit Graduate Business School at University College Dublin. According to Hoepner, sustainable finance has become one of the most important and effective ways to tackle many of our pressing societal problems, by shifting funding from unsustainable businesses and projects towards those that achieve both financial and environmental and/or social outcomes.

“Creating the right framework for sustainable finance to flourish is complicated, however,” he says. He explains that the European Commission has developed an action plan for financing sustainable growth. To advance the plan, the Commission sought support for its work, relying on the recommendations of a high-level expert group and now a technical expert group, of which Hoepner is a member. UCD also prides itself on its newly redesigned MSc in Renewable Energy and Environmental Finance, led by Hoepner, which features as a key contributor to the Irish Government’s new strategy for the financial services sector to 2025, of which sustainable finance is a key pillar.

“The MSc programme includes a full semester on finance, where students study various cutting-edge aspects of financial services, which is then combined with insights from environmental sciences in the second semester. Another pioneering aspect of the course is the green-data science module where students learn how big data can be used to assess the environmental performance of companies, and how this links to business and investment relevant outcomes,” explains Hoepner.

The American Chamber of Commerce is keen to recognise these environmental endeavours. Its ‘Créafóg’ award (meaning “earth” in Irish) for sustainability will be presented to an American Chamber member company that has demonstrated exemplary commitment and real excellence in terms of sustainability and environmental awareness. Companies including Ballina Beverages, AbbVie and Abbott have all been shortlisted for the award.

“AbbVie in Ireland is committed to going beyond the medicine we make and sell to deliver a wider societal benefit focused on improving health outcomes, operating responsibly and contributing to our communities,” he says.

The company is advancing the long-term sustainability of operations, including its commercial and manufacturing facilities in Ireland, by reducing the energy it consumes, reducing the water it consumes and reducing the waste it generates. Tuohy notes that since its inception in 2013, AbbVie has invested more than €6 million in sustainable and renewable energy programmes in Ireland. The pharmaceutical giant has also established absolute reduction goals, and invests in technology and infrastructure to reduce its carbon footprint accordingly, he adds.

Tuohy offers a couple of examples of what these efforts look like on the ground. “As a measure of impact, since it was launched in 2016, AbbVie Ballytivnan’s water-optimisation project [creation of a 120m deep well, a water treatment system and a reliable water distribution network] has saved almost 180 million litres of water and delivered annual savings of approximately €100,000.

AbbVie has also introduced a “solar array” at the Sligo site. “This solar panel field was chosen based on local considerations and helps to power, among other things, the site’s recently installed e-charging point,” says Tuohy.

Crucially, AbbVie has continued to make progress on its absolute environmental sustainability targets even as its business has grown. In 2018, the company reduced absolute total waste (including hazardous and non-hazardous) by 10 per cent, achieved a recycling rate of 32 per cent, and reduced absolute water consumption by 11 per cent, notes Tuohy.

Abbott has also been nominated for the Créafóg award, in particular for its focus on waste-management including its zero waste to landfill (ZWL) programme. “Following an extensive certification process and audit of our waste practices, all six of our manufacturing sites across all the four provinces of Ireland achieved ZWL status in 2013 and we are proud to report that we have maintained this status since then,” explains a spokesperson for the company.

Since this certification, the regional sites have saved a collective 23,000+ tonnes of waste from going to landfill. This is achieved through expansive waste reduction and recovery programmes across the sites. “We are proud to innovate and inspire other organisations to look at how they can implement sustainability programmes within their business operation,” the spokesperson adds.

Amazon is another US firm that often finds itself in the headlines for the wrong reasons, but it recently illustrated its commitment to sustainability with the announcement of three new renewable energy projects. The projects – one in Ireland, one in Sweden, and one in the United States – will deliver wind-generated energy of more than 229 megawatts (MW) of power, with expected generation of more than 670,000 megawatt hours (MWh) of renewable energy annually.

The Irish project involves Amazon buying energy from a new wind project in Ireland, a 91.2 MW wind farm in Donegal. The Donegal wind farm project is expected to deliver clean energy no later than the end of 2021. According to the company, the new projects are part of its long-term commitment to achieve 100 per cent renewable energy for its global infrastructure; last year it exceeded 50 per cent.