Pushing the ‘Irish advantage’ in Europe 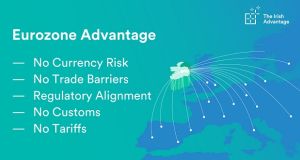 Enterprise Ireland is pushing the “Irish advantage” in a strategy to ensure businesses in the Republic are well-prepared to deal with Brexit.

Although companies seeking market diversification may look to the allure of the orient or the challenge posed by breaking into the typically tough US market, an easier jump – and in some cases a more rewarding one – for those planning on lessening their UK exposure is to go into the eurozone, according to Ireland’s export agency, Enterprise Ireland.

The agency is pushing the “Irish advantage” in a strategy to ensure businesses in the Republic are well-prepared to deal with Brexit, whatever the outcome. And that strategy appears to be working, with client exports to the UK coming in at 34 per cent of total exports last year, down 10 per cent on 2007.

“That’s really hard-won business and we don’t want to lose it,” says Anne Lanigan, Enterprise Ireland’s regional director for the eurozone, referring to the fact that the agency’s clients exported €7.6 billion to the UK in 2017.

“What we’re trying to do is make our companies see that the UK isn’t the end of the rainbow but that there’s an awful lot more,” says Lanigan, who is based in Amsterdam.

Of the 19 countries in the eurozone, Lanigan believes six are ripe for Irish companies to grow their businesses. Within the eurozone, some 92 per cent of the agency’s client exports go to Germany, France, the Netherlands, Belgium, Italy and Spain – in that order.

“They’re six markets that are well-developed, the economy is very stable, they have the same currency and really it should be an extension of our domestic market,” she says.

Her advice on eurozone diversification is that companies need to approach the move in the right way. “Attending a trade fair and meeting someone who says ‘I’m interested in your product’, that’s not really going to deliver.”

The first step to making the move abroad is doing market research. While some companies will view the eurozone as a homogenous place, Lanigan notes that different markets have different opportunities and challenges.

For example, while the native language might not be too important in the Netherlands, it is important in France.

Linesight, a professional services provider to the global construction industry, formerly known as Bruce Shaw, found the Netherlands to be an easy market to enter, with English widely spoken.

“Being fluent contractually is a different thing than being able to speak a language. In other European countries, language can be a barrier in this respect. We demand that contractors deal with us in English in the Netherlands,” says company director Paul Butler.

Language aside, there are other barriers to entry in European markets. In the case of Offaly-based oil boiler specialist Grant Engineering, after a decision was made to enter the French market, the company spent two months contacting local potential distributors and clients.

After that, two people came on board on a consultancy basis for the company and subsequently set up offices and a training facility in France.

While Lanigan doesn’t necessarily suggest putting someone on the ground straightaway, her suggested approach follows that of Grant Engineering and she believes someone with international market experience should be in place.

“There’s an impression that the French are difficult to deal with, but that’s not necessarily the case at all. Grant have a French national running their product and they’re using our discovery grant to localise their product,” she says.

Indeed, as far as Enterprise Ireland is concerned, there’s no country too difficult for Irish exporters, particularly with the so-called “Irish advantage”.

Buyers in the eurozone see compliance with European Union regulations and commitment to the union as a huge advantage, Lanigan says, and because Irish companies appear to have that commitment, they’re becoming more attractive on the continent.