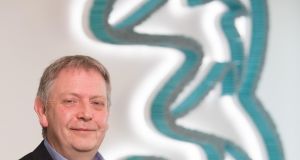 Three chief technology officer David Hennessy: “By securing uniform frequency nationally, we can ensure that those living outside the main city areas can enjoy the same service as urban dwellers.”

It is just 10 years since the birth of the smartphone. The iPhone was launched on an unsuspecting world on June 29th, 2007, and the pace of change in mobile communications has been nothing short of breath-taking since. The 3G network, which had been more than sufficient to meet mobile phone users’ needs up until then, was quickly superseded, with 4G services being introduced within six years to cater for ever-increasing demands for data capacity.

And now even 4G is being pushed to its limits, not just by smartphone users but by new technologies such as the internet of things (IoT). Enter 5G, which will offer speeds 100 times faster than today’s 4G networks

Plans are already being laid for the roll-out of the new technology in Ireland and an auction for spectrum to carry the new service was held in May by ComReg, the telecommunications regulator. The outcome of the auction saw Three Ireland secure the 100 MHz frequency nationally.

“We were very pleased with the auction,” says Three chief technology officer David Hennessy. “By securing uniform frequency nationally, we can ensure that those living outside the main city areas can enjoy the same service as urban dwellers. Also, 100MHz is the recognised optimum bandwidth for 5G.”

Universal coverage across the country is vitally important as 5G is much more than simply an improved version of the current 4G service. It will provide the connectivity to make possible technologies like smart cities, driverless cars, and the ubiquitous internet of things.

“This is very exciting as 5G will increase the capacity of each cell on the network enormously,” Hennessy adds. “It will allow millions of users to connect through each cell and this will facilitate the massive uptake in internet-of-things and machine-to-machine communications solutions that we anticipate in the coming years.”

5G availability is also a prerequisite for driverless cars. “While 5G will greatly enhance speeds, that is not really the important thing for driverless cars,” Hennessy explains. “The crucial thing there is latency. This is the speed at which things happen, the time it takes for a command to be recognised and executed. 5G will have ultra-low latency. Network latency is about 30 milliseconds at the moment, with 5G it will be down to just one millisecond. We are building the network of the future and 5G is key part of that future.”

Increased connection density will be another important benefit. The 5G network will be capable of supporting up to one million connections per square kilometre instead of tens of thousands at the moment. In practice, this will mean that thousands of mobile phone users will be able to share the same network with hundreds of thousands of IoT sensors on cars, traffic lights, and buildings, with no constraints on service.

“Not all connections will be at very high speeds,” Hennessy explains. “They could be kilobit speeds for traffic-light data or location sensors and gigabit connections for smart phones or TV connections.”

The most exciting aspects of 5G haven’t even been invented yet, however. “I am looking forward to seeing the new applications which will be developed in the next few years,” he says. “5G has lots of attributes such as speed, reliability and density but it’s the ability for people to develop apps that utilise these attributes that’s most exciting. No one could have imagined the number of different apps that would be developed for the android operating system when it was first introduced. That’s what’s going to happen with 5G. Lots of very clever people will develop lots of solutions to sit on it. These will support smart cities, smart campuses, smart health, driverless cars and much else besides. This is a huge opportunity – drivers could have the equivalent of Google Glass being displayed on their car windscreens, for example.”

And this could be a reality in the foreseeable future. “As things stand, we are hoping to see the new network rolled out in 2019 or 2020. Of course, a lot will depend on how quickly the new 5G devices are developed.”