Ireland’s fitness business is booming and entrepreneurs are cashing in 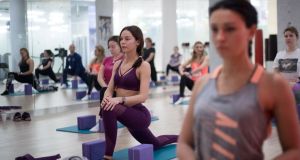 Joining a gym used to be a major financial commitment where you forked out a hefty deposit and then shackled your bank account with a direct debit that made you feel like an indentured gym slave. It was often money well-wasted as well.

The drop-out figures for Irish gyms is massive, with an estimated 80 per cent of people leaving after the first couple of months and losing their hard-earned cash. A combination of factors from work and family commitments, a lack of self-discipline, and a preference for more leisurely activities are typical reasons for throwing in the towel.

However, a new trend is kick-fighting its way into the market. A remodelled, leaner and keener fitness gym is attracting many clients into their establishments. Names like FlyeFit, Cross Fit, Raw, Ben Dunne Gyms and personal boutiques like Howth Gym have punched their way into the conventional market and transformed the industry with TRX workouts, pro-boxing courses, hot yoga, Les Mills-body pump and body blitz sessions.

Many of these are low-cost, no-frills set-ups with state-of-the-art equipment and dynamic personal instructors providing breathtaking workout plans.

Take FlyeFit for instance. It costs €29 a month and you pay online so there is no formal interview or intrusive personal questions. It was originally owned by Jackie Skelly and Mark Tooke, but they were bought out by business entrepreneurs Brendan O’Hagan and Sé Kennedy in 2010. Flyefit has a turnover of about €8.7 million in membership fees and ancillaries.

Mark Ward is marketing manager for the firm’s nine outlets in Dublin.

“Our demographic is mainly men and women aged between 18 and 35 – tech savvy and usually in touch with their phone and iPad where a lot of our marketing takes place. There has been a huge upswing in the gym and workout industry as people embrace a healthier lifestyle. The role of social influencers with their own sites also encourages more people to take on a workout regime and a fitness target,” he says.

Influencers like Vogue Williams and Sophie Kavanagh, who Instagram their intense workout regimes, are encouraging other mere mortals to give it a go. Bodybuilders like Rob Lipsett, Rosanna Davidson, Irish rugby heroes like the Kearneys and icons such as Colin McGregor are also role models with ab fab physiques.

Many gyms offer up to 50 free classes a month and that’s included in the €29 fee. Flyefit just opened another gym at CHQ near the IFSC while another is planned for Stillorgan on the southside of the city.

Regulars at the Baggot Street outlet find it convenient for the office – also there are no screaming toddlers or suburban social climbers flashing their Lululemon labels. Traditional gyms like Riverview are also much more expensive if a bit plusher. Adult membership at David Lloyd’s Riverview is a €100 to join and then €133 a month. Although you get a nice swimming pool, steam rooms and fluffy towels thrown in.

Raw is another no-nonsense, self-service supergym that flexes its muscles in the market. It boasts a 6,000sq ft gym tucked away on South Richmond Street in the centre of the capital and another in Sandyford. It prides itself on its gritty, graffiti imagery along with a distinctive red and black interior where tough-love mottos are splattered on the wall: “Excellence is a habit not a trait”; “Champions aren’t born, they are made right here, right now”.

The owners John Kenirons and Mark Brophy opened up in 2008 with a mission to cultivate a champion mindset regardless of age, ability or training history. The staff look the part and transmit a can-do mentality that’s infectious. Their physiques look truly ripped. One expects to see Colin McGregor sail through the door along with Katie Taylor punching the air. The fitness team and their philosophy are central the driving force behind Raw and their expertise and knowledge is contagious. They have more than 80 classes a week along with personal training and nutritional care. Another new side of the business is the Raw Academy that was set up to train up coaches and trainers for a fitness career. Rob Lipsett who has 360,000 followers on Instagram is a big attraction, along with Mike McGurn and Karl Gilligan.

Annual fees for Raw gym range from €289 for students to €396 for regular membership.

Ben Dunne Gyms is also a contender for the successful new-age trim gym awards, with 50,000 members of 12 gyms. To give Dunne his credit, he was one of the first Irish pioneers of the low-cost model and his vision has seen a big pay-off as he caters for the financially strangled middle class. He started off in 1997 and opened his first gym in Blanchardstown. He also expanded into the UK but the competition over there was tougher, so his real winners are in Ireland. Once again, he concentrates on delivering top coaching advice and equipment with a no-frills or no-fluffy towels environment.

“We are not going for the elite, we are going for the middle of the road customers. We rely on price quality and the friendliness of our staff,” he says. Therefore, you don’t have to sign any onerous contracts. His expanding gym model hopes to see revenue of €10 million a year in the future.

If the trend is towards new-age and fresh concepts, then gyms like Cross Fit in Blackrock run by rugby ace Paul Wallace, physiotherapist Albert Kehoe and training coach Nigel Osborne is gaining traction. Osborne explains the concept behind the Cross Fit model principle.

“There is a real community feel here and a sense of winning. We have a diverse clientele from tennis supremo Scott Barron to young rugby player Jack Duane and rugby players who frequently train along with the members and provide a motivational force. The amazing thing is there is an 80 per cent drop-out rate in most gyms but here we keep 100 per cent of our members – it’s a unique statistic,” he says.

On top of the basic gym, they have coaching classes and an on-site physiotherapist to deal with muscle or back issues. The Cross Fit community concentrate on body awareness and give themselves goals to achieve over a period of time.

The members are given challenges throughout the year on their performance output. They also keep a log of their sleep patterns, nutrition and exercise routines.

“The gym attendance and workout become keystone habits and take a more central role in their lives. So instead of just trying to fit in the gym, they take an overall appraisal of their life-health balance and work around it and that often mean curtailing their drinking habits or their eating habits.”

Crossfit exercises were originally developed for the US police force and special elite soldiers so it’s high intensity and designed to use every muscle.

“We see the revolution of the gym as a personalised service with a tailored coaching element. We have guys as young as 18 and as old as 80 years,” says Osbourne.

His team recently launched an online “back fit” programme that members can log into. Albert Kehoe has been the driving force behind this service as he was amazed at the number of Irish people with back issues – especially in the business world.

“This online modular course relieves back pain through a programme of key exercises and core body strengthening. It’s a 30-day online system that solves pain through defined movements as that has been proven to be the only way to get long-term relief from pain. A lot of our members are accessing the programme in conjunction with the gym and we are driving it into the corporate market over the coming months.”

The Gym-Howth is a boutique style gym founded by Erica Brennan in 2009. Her client split is about 60 per cent female and 40 per cent male. The gym delivers a number of high-intensity classes from body cycle sessions that have been personally choreographed, to body conditioning, along with hot yoga instruction with infra-red heaters to really burn off the calories. Brennan gives many of the classes herself and is a walking advert for that healthier, fitter lifestyle.

“We have classes that start at 6.30 in the morning and they are very popular with busy executives who may not get another chance to work out during the day.”

Her basic gym fees start at €34 a month and there is the popular option of pay as you go.

“You can also leave whenever you like, and we don’t hold anyone to paying for three months ahead. The best-laid plans can be broken without penalties.’

She also provides a full package of classes, personal programme training and gym workout for €99 a month aimed at women who want to meet a target for a particular event like a wedding or holiday.

“There are no egos here – you can be as private as you like or connect with others in a class as the choice is there,” says Brennan, who also set up a beauty salon upstairs for an overall makeover.

Fit2Go gyms are aimed at students with bases at DIT Kevin Street, DIT Bolton Street and Grangegorman. It also prides itself on its Les Mills Body pump classes that’s renowned for its kickass routine that will have you sweating profusely. This Dublin chain follows the pattern of a no-contract, pay-as-you-train option and the gyms have highly intense fitness classes and personal programmes.

Its motto is: “Everything we do makes it easier for you to sweat harder.” You will certainly need to bring your anti-perspirant and a lot of water to stay hydrated with the Les Mills sessions. You can buy a three-month gym attendance for €75 with pool facilities and free classes or just pay as you go and have a swim and a workout for just €6.

According to research analyst Emma McGeown, the marketplace for gyms and fitness centres is changing as a result of the cost-cutting consumer mindset. “This is leading to the expansion of no-frills budget gyms. Although this opens up more opportunities to less affluent consumers, it seems that no-frills gyms are becoming a force to be reckoned with.”

Gym bunnies are early risers and many of the new-age gyms open at the crack of dawn and shut after midnight. Looking at the expansion plans of the latest fitness clubs, there is no doubt the gym business in Ireland is in rude health and punching well above its weight. The ultimate champions will keep costs down by trimming away the excess, the frills and the fat and building up the core strengths and sense of community.