Collaboration is the key to success in the autonomous car world 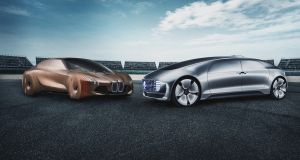 The motoring section headlines are looking more and more like some sort of motorised version of Tinder right now as car companies team up with tech giants, and indeed in some cases rival car companies, to help figure out the future of the car.

It’s a time of huge, almost incalculable, change in the car industry, as we move away from the traditional build-a-metal-box-powered-by-small-explosions-and-sell-them-by-the-thousand model into a future where those metal boxes will be powered by electricity, will to a greater or lesser extent drive themselves, and where ownership is likely to be more centralised into large fleet management companies, rather than sales to individuals.

All of that change creates uncertainty, and uncertainty creates unhappy shareholders. Hence, car makers are doubling up to double down on the investment needed to break into this electric and autonomous future. And Ireland is, possibly surprisingly, in the vanguard.

Way out west, well as far west as Shannon anyway, there is a robot revolution taking place. Jaguar Land Rover chose Shannon to set up its robotic and high-tech development lab, and it’s being headed up by former IBM man John Cormican. We spoke to Cormican recently at the Electronomous future car technology conference in Kerry, and he confirmed that sharing really is caring in this new car-making world.

Alluding to the fact that Jaguar Land Rover, as a smaller car maker, can sometimes struggle to match the research and development spend of the likes of Mercedes-Benz or BMW, Cormican said the only way forward was to collaborate. Jaguar Land Rover already has tie-ups with the likes of Google’s Waymo self-driving car spin-off, supplying it with high-tech I-Pace all-electric cars for testing work, and it’s also working with Connected Energy on battery disposal and recycling.

Just weeks after we spoke, Jaguar Land Rover announced a major collaboration with BMW. The two companies will work together to develop next-generation electric vehicles. BMW will share its “Generation 5” electric motors and battery, which will make their debut on the new iX3 electric SUV later this year, with the British firm.

There is also a huge choice of potential partners in Ireland. “We’re close to Limerick, Cork, and Galway where we’re based, and in those three cities you have world-class universities, and three world-class technical colleges, so we have a great pipeline of talent for engineering and software,” Cormican said. “For the past 30-40 years we’ve been exporting that talent all over the world, which in some ways is great, it’s part of our DNA as a nation. But now, hopefully, a lot of folks will be staying home and working on tech like this here.

“The amount of tech companies in this country already is mind-boggling. The Dublin tech scene is pretty well known, but out west it’s really growing now. You have ourselves, General Motors, Valeo, Analogue Devices, Cisco, Ericsson, Johnson Controls and more. The support of the IDA and Enterprise Ireland has been crucial in all of this.”

Jaguar Land Rover is also cautious about losing its corporate, rather than vehicular, autonomy if it were to link up with a rival to help share development costs. Speaking at the Financial Times Future of the Car Summit in London, the company’s chief executive Dr Ralf Speth said: “You can talk about economies of scale and that’s correct. But on the other hand, there’s the freedom we have to develop and do our own strategy in a fast way, a structured way. This gives us a lot of power. In the UK we’re a big company, but in international terms we’re small, a design house. We deliver outstanding vehicles to special customers. Being small and nimble is also an opportunity to be agile; the I-Pace shows this best.”

As part of this caution, the agreement between Jaguar Land Rover and BMW has included a codicil that the two companies won’t share complete vehicles, but will instead develop systems which can be incorporated into their own unique products in their own factories. It’s similar to the tack taken by BMW in its collaboration with its old enemy – Mercedes.

The move, which has been given the go-ahead by US competition authorities, will see the two German giants establish an entirely new combined company. This new entity will pool the resources of Mercedes and BMW’s already extant ride-hailing and sharing services. These include the MyTaxi app and Car2Go instant rental service, owned by Mercedes, and BMW’s DriveNow car rental service.

It’s estimated that MyTaxi and its affiliated brands such as Chauffeur Privé already have some 15 million customers worldwide, with more than 250,000 drivers signed up as service providers. The next step will be to broaden out the base of services such as MyTaxiMatch, which seeks to provide taxi-sharing between customers who are headed in the same direction, in an effort to reduce costs to the user, as well as cut back on traffic congestion and pollution.

Mercedes and BMW also want to introduce “multi-modal” transport offerings, which look beyond the relatively simple taxi or hire-car systems currently in use. BMW already has versions of its in-car sat-nav, which will alert you if your planned journey is easier by public transport, and which can work public transport options into your journey planning. The idea is to include more and more modes of transport, including car-sharing, bike rental and taxis as well as public and private transport, into a single app allowing bookings and payments to be made through one source.

Parking will also be taken care of, with cashless on-street parking and pre-booking of spaces in multi-storey car parks, as well as helping electric car users find and pay for charging points when they’re out and about.

“As we continue to pursue our strategy, we are combining the expertise of two technology leaders. At the BMW Group, long-term partnerships within a flexible, scalable, non-exclusive platform are fundamental to advancing the industrialisation of autonomous driving. Combining the key expertise of our two companies will boost our innovative strength and speed up the spread of this technology,” said Klaus Fröhlich, head of BMW’s development programmes.

Ola Källenius, incoming chief executive of Mercedes, said: “Autonomous driving is one of the most revolutionary trends for us at the moment, and the entire Daimler Group is working very hard on it. As always at Daimler, our top priority is safety. Instead of individual, stand-alone solutions, we want to develop a reliable overall system that offers noticeable value-add for customers. Working with the right partners, we want to make significant advances in enhancing the performance of this technology and bring it safely on the road.”

It’s far from the only unexpected marriage in the motor industry right now. Ford is forming a deeper and deeper collaboration with Volkswagen to share both commercial vehicle production and electric car tech, and it could lead – in the future – to Ford basically turning all of its European passenger car engineering over to VW, with only a rump team of Ford engineers to “Ford-ify” the finished design.

Fiat, too, seems keen to forge an alliance or a merger with another major car maker. Its recent offer of a merger with Renault-Nissan may be dead in the water now, apparently undone by Nissan’s concerns over a dilution of its holding in the company, but Fiat – which already owns Chrysler, Dodge, Ram Trucks, Jeep, Alfa Romeo, Lancia, and Maserati – still reckons it needs more collaboration and consolidation to ensure its future survival.

Some of these weddings might be under the shadow of the financial shotgun, but it’s going to be fascinating to see how the kids turn out.