Contrary to many people’s fears, new technologies like AI and advanced robotics may create more jobs than they destroy 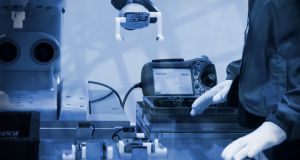 “Automation can reduce the more mundane and repetitive work elements, leaving opportunities for people to improve their skillsets for a higher-value role.” Photograph: iStock

Fear and apprehension relating to the potential of new generations of robots leading to mass unemployment tends to move up a notch whenever a shiny new piece of artificial intelligence (AI)-powered technology is unveiled.

One of the few instances where that was not the case was the recent announcement by Irish company Akara Robotics that it had developed a virus-killing robot with the ability to disinfect hospitals and get rid of the Covid-19 virus. The replacement of human labour was naturally seen as a positive.

But that is far from the norm. “I generally get asked two questions about AI and robotics which are usually based on fear,” says KPMG director Kieran Towey. “When are robots going to take my job away and when are they going to murder me in my bed?”

Towey, who worked as an epidemiologist with the Department of Agriculture during the foot and mouth disease crisis of 2001, remains very positive, nevertheless.

“If you think back 150 years ago, most of work was powered by the horse,” he says. “It was used for everything – transport, logistics, farming, pulling barges along canals. The advent of the internal combustion engine changed everything. It put horses and all the ancillary services like blacksmiths out of business and they became very niche.”

But what came out of it was something much better. “It created the car industry, the petrochemicals industry, and a whole lot of other industries that couldn’t have been imagined before then exploded out of it.”

EY partner and head of data analytics Eoin O’Reilly shares this optimism. “There is a range of things going on,” he says. “At one end of the spectrum you have care workers and others in sectors that require human contact and face-to-face engagement. They will see less disruption. On the other hand, there are activities with higher potential to be automated like stock market analysis that will be more affected.”

“There will be a range of disruption and it won’t hit all industries equally,” O’Reilly adds. “There is no doubt that the impact will be severe for some. We shouldn’t be too shy about saying that. Some office jobs and others like truck drivers will change drastically or even disappear. On the other side, a whole new set of jobs and industries can be created by the technology.”

That more or less positive outlook is also shared by PwC technology partner David Lee. “Most industry sectors have undergone some form of automation,” he says. “But automation, robots and AI can actually create more jobs, many of which will be new roles. That’s because automation can reduce the more mundane and repetitive work elements, leaving opportunities for people to improve their skillsets for a higher-value role. This is particularly important in a crisis, when attention may need to be given to new directions very quickly.”

PwC analysis to assess the impact of AI on Ireland’s economy concluded that the adoption of AI, removing humans from processes and certain decision-making, will mean that some jobs will inevitably become redundant, but others will be created.

“This is the case as shifts in productivity and increased consumer demand take place,” Lee explains. “The impact is mainly driven by product enhancements (7.9 per cent of GDP in 2030) which increase product variety, quality and time saved. The impact from productivity gains is lower than consumption-side enhancements (3.7 per cent of GDP in 2030). The analysis concluded that the effect on jobs in Ireland in the long term would at least be neutral, if not net positive.”

Towey points to other research carried out by the Oxford University Future of Humanities Institute and Yale, which was based on a survey of 352 top thinkers in the field. They were asked when they believed high-level machine intelligence (HLMI) will be able to accomplish every task better and more cheaply than human workers.

But this does not necessarily point to a bleak future. “A task is not a job, it is part of a job,” Towey points out. “We know in professional services that a vast amount of our time is taken up by mundane tasks that are all necessary. We’d love to be able to have a Star Trek computer to ask to do the simple things for us. Those things are already here in a nascent form.”

He says we will increasingly use AI to perform menial tasks. “What we are good at is the creative side. AI is just a tool. Diversity becomes more important in that context. By diversity I mean teams collaborating together to be more creative. Our emotional intelligence and problem-solving and teamworking abilities will come to the fore. We will work more closely with people but will use the AI tools to do so.”

O’Reilly takes the same view. “You need to think about it in different ways,” he says. “AI and robotics can do a lot of the boring things we do today and allow us to be more impactful in our jobs. We will be able to spend more time analysing and acting on data than gathering and preparing it. Whole new industries might be created around training the technology. Apple has people listening to conversations and Facebook has people moderating content and these human interventions are used to train the machines.”

Lee says it would be very difficult to remove people completely from many processes. “It will be more a future where people and machines will work together, creating more rewarding jobs,” he says.

“In manufacturing and logistics, for example, automation may make certain aspects safer and quicker than a human could do the job,” Lee continues. “In the US, ongoing research includes a focus on trying to protect healthcare workers from infection through the development of a biosensor and AI app that will enable coronavirus diagnosis with more limited patient and healthcare worker interaction. Human judgement will always be required and it’s really about a new way of working – trusting machines to do their jobs – but people managing the process. When problems occur, most likely a human will be required to fix it. As technology evolves, people will always be more innovative – thinking outside of the box – and when a crisis happens, it is people that will sort the problem.”

Climate change is one of those crises. “There is almost so much data on climate change that they don’t know how to deal with it,” says Towey. “That’s due to the technology but it’s getting better. They are already able to put computer vision on a pesticide sprayer to identify the leaf to apply it to. They are applying intelligence to where it was never really possible before.”

He believes the creation of a global network of sensors to provide data on what is going on in the world will be the next great leap forward. And he doesn’t believe that to be very far-fetched. “If 30 years ago I said you would have the sum of global knowledge in your hand you wouldn’t have believed me. Now Google gives you that on your phone. We can’t even begin to comprehend what will come about in the next 30 years. Work may become more of a choice than necessity. AI and robotics could deliver things like universal basic income.”

But we should use the time available to us to get ready for the change. “Failure to prepare is preparing to fail,” he says. “We can see what’s going to happen so we can prepare for it. We can’t allow a situation to develop of first they came for the drivers and then they came for the retailers. When we know disruption is coming, we have to set up society to manage the change. We can’t just wait for it to happen.”