The Air Corps offers the opportunity to earn as you learn 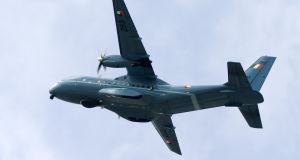 If and when Air Corps personnel decide to leave the forces, “they are much sought-after both as commercial pilots and by aircraft leasing companies”. Photograph: iStock

For a young person starting out, one of the best ways to earn as you learn in aviation is to get accepted into the Air Corps, which combines a high-octane mix of in-house training and external accreditations.

There are three ways in: basic Defence Forces recruitment and training; the technical stream, previously known as apprenticeship; and cadetship.

Capt Stephen Connolly, who is a press spokesperson for the service, is a good example, having begun his Airs Corps career in 2007 as a cadet.

“I completed nine months of military training before beginning a year of Ground School, which included the IAA [Irish Aviation Authority] State examinations. I began flight training on the Pilatus PC-9M aircraft and was commissioned with wings in December 2010. This training allowed me to obtain an EASA [European Aviation Safety Agency] commercial pilot’s licence with airline-transport pilot licence knowledge. This is the first step for all commercial pilots worldwide,” he says.

Once a pilot with this licence completes 1,500 flight hours, then he or she can obtain a full ATPL endorsement. Over the past 10 years, Connolly has qualified on four different aircraft and is currently an aircraft commander on all types. He is also a qualified Crew Resource Management (CRM) instructor and, in 2016, qualified as an adult guidance counsellor in DCU. All of these courses were paid for and endorsed by the Irish Air Corps.

His colleague Sgt Eoin Stanley had a similar career but in a parallel stream. Sgt Stanley is a qualified aircraft technician and instructor – the Air Corps’ Technical Training School is accredited by both EASA and Solas.

Technicians, upon completion of their four-year apprenticeship, receive a level 7 Solas accreditation as well as an EASA Part 66 Category B licence. They are then posted to various units where they will continue their training, including on newer aircraft, “while all the time growing and improving their experience”, says Capt Connolly.

Each of the new apprentices and cadets stay in newly refurbished accommodation, “an added advantage that military cadets and apprentices have over their civilian colleagues”, he says, adding that the Defence Forces apprenticeship competition is now open.

If and when Air Corps personnel decide to leave the forces, “they are much sought-after both as commercial pilots and by aircraft leasing companies”, he says.