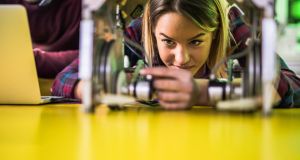 Girls at 16 choose physics to a much lesser extent than boys, which stops them following an engineering career. Photograph: iStock

Last year, the International Air Transport Association (IATA) launched a new campaign to target gender imbalance in the aviation industry. The campaign focuses on increasing the number of women working in pilot and operation roles, where women currently represent about 5 per cent of the global pilot population, and 3 per cent of chief executive positions.

“Many of the top leasing companies have established diversity committees dedicated to achieving more inclusivity in the workplace and overall there seems now to be a recognition that greater representation of women in senior positions will contribute to the overall competitiveness and success of the aviation industry in Ireland,” says Laura Cunningham, partner in the aviation group at Arthur Cox.

The establishment of annual accolades such as IATA’s Diversity and Inclusion Awards may encourage more companies in the aviation industry to set up D&I committees, and there is an appetite for engagement from employees. Law firm Mason Hayes & Curran, which conducts an annual report on gender and diversity in aviation, found that more than 70 per cent of both male and female respondents believed their organisation would benefit from having a gender and diversity committee.

Much of the support and expertise offered to women in the industry currently comes through independent network groups. “There are some excellent organisations and initiatives which are seeking to redress this imbalance and significant strides have been made in recent years,” says Cunningham.

“Advancing Women in Aviation is committed to engaging with CEOs and other senior executives to develop strategies to promote the advancement of women leaders within the sector. It organises global events such as lecture series, roundtable discussions and luncheons which promote awareness of and discourse on the need for greater representation of women in senior roles in the industry,” she says.

“In Ireland, the Women in Leadership lecture series at DCU, endorsed and sponsored by Dr Mary McAleese, has also focused on the challenges women face in advancing their careers within the aviation industry.”

But part of the problem lies further back, according to Dr Marina Efthymiou, assistant professor in aviation management at DCU. “Together with extractive and energy industries and construction, the transport sector remains one of the most heavily male-dominated industries,” she says. “There are several causes behind the under-representation of women in certain sectors and occupations. First, early school choices, rooted in the cultural environment, which affect career choice. For example, girls at 16 choose physics to a much lesser extent than boys, which stops them following an engineering career. Moreover, the percentage of girls choosing physics has stagnated in the last 30 years.

“But even women whose educational background is aimed at male-dominated occupations, like engineering and technology, end up dropping out at various points because of limited mentoring and opportunities,” she adds.

The issue of gender disparity and of diversity on a larger scale in the aviation industry is something the course is trying to address, explains Dr Efthymiou. “We are very proud that the MSc is preparing women to take senior positions within the aviation industry. Female representation in senior roles is of vital importance for the promotion of diversity and inclusion in the industry. Around 28 per cent of the MSc students are women, this is still very low, but steadily increasing. We are doing everything that we can to encourage and promote diversity and inclusion,” she says.

While awareness of disparity, and the establishment of committees to address this is welcomed by the industry, a wider transformation may be needed, suggests Dr Efthymiou. Part of that will involve addressing scheduling in operational roles. “Inflexible working schedule is a serious problem affecting particularly women, who seek for better work-life balance than men,” she says. “Many transport occupations, mostly those with technical and operational roles, involve long working hours and abusive shift patterns. The industry needs to rectify that.”

As the industry is traditionally male-dominated, several elements of the culture also need to change over time in order to reduce the gender gap. “The ‘male-working’ culture is present from the very first moment of the recruitment process,” says Dr Efthymiou. “The current methods for attracting applicants typically discourage women because of the tactics, including language used, in the job ads. Many times, women working in the industry tend to conform to male working patterns to achieve acceptance among male co-workers.”

Acknowledging the need to promote a more diverse and inclusive environment, the MSc in Aviation Leadership opened a special entrance route for candidates with appropriate work experience, but without a primary degree. “We also attract candidates from various countries, including the USA, Middle East, India and China, and we promote a very inclusive culture,” says Dr Efthymiou.

“Emphasis needs to be given to reduce pay gaps and the industry should encourage the appointment and promotion of diverse background,” she says. “Being mindful of unconscious bias and understanding the needs and individual characteristics of the labour can create a more welcoming environment for everyone.

“Aviation is a very international working environment with significant labour mobility, and aviation companies employ a wide spectrum of nationalities and of various cultural and educational backgrounds. Diversity and inclusion is a requirement for increased productivity, and it is a societal expectation. The industry has now realised the potential of this and is actively trying to recruit and maintain diverse labour. Needless to say that this needs to be actually implemented and not only used for positive PR.”