Have an adventure, or several, in the Maritime county

Mayo is the perfect destination for lovers of the great outdoors, and for those who love a bit of luxury too 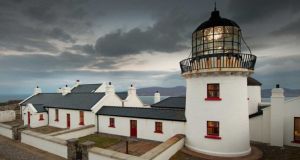 Mayo has long been a favoured destination for lovers of the great outdoors. It’s also a firm favourite for those who love great hotels. Put them together and you’ve the makings of the perfect holiday.

If game-fishing and Atlantic salmon get you going, you’ll fall hook, line and sinker for Mount Falcon, a boutique hotel near Ballina in still largely undiscovered north Mayo.

Opt to stay in the manor-style period property or in one of the beautifully finished luxury lodges on its woodland grounds, and make the most of its sporting pedigree.

The River Moy runs through it, which every year attracts seasoned anglers up and down its length. Although the hotel encourages catch and release, if you catch something good early enough in the day, the chef will prepare it for you for dinner.

Mount Falcon is not just a centre for angling however, it’s a golfing hub too. No less than three classic championship links courses – Carne in Belmullet and Rosses Point and Enniscrone in Sligo – are within a short drive.

Mount Falcon is also the perfect location from which to make the most of its adventure partner – Rachel’s Irish Adventures. It is run by local woman Rachel Nolan, an ultra-distance endurance racer, qualified Krav Maga self-defence instructor, extreme explorer and all-round lover of the great outdoors.

Nolan organises bespoke tours for groups of all sizes. Depending on the kind of activities you’re interested in yourself, she can organise hiking and mountain climbing, trail running, Krav Maga self-defence classes, mountain biking, fishing, sea and river kayaking, surfing and SUPing.

She can even organise genuine home-baking classes, in the kitchen of her mum’s B&B. A whiskey aficionado, Nolan can also organise seriously good whiskey tastings. “The feedback we’re getting from our guests in relation to Rachel’s Irish Adventures is just phenomenal,” says Mount Falcon owner Alan Maloney.

For families with younger children, Mayo is perhaps most famous for the Pirate Adventure Park at Westport House.

Thanks to its new owners, Hotel Westport, the park has seen significant investment this year including loads of new attractions such as a Vortex Tunnel, Mini Ferris Wheel, and Disc Golf. That’s on top of family favourites such as the Pirates Plunge Log Flume Ride, Cannon Ball Run Slide, and Inflatable Obstacle Course.

Base yourself at its camping and caravan park to enjoy the historic house and its stately gardens, currently being restored to their former glory, or book into the Hotel Westport next door. It has a full range of activity breaks for grown-ups too, including bridge, yoga and golf.

Hotel Westport is also a great base from which to explore the Great Western Greenway, Ireland’s longest off-road cycling and walking trail, which follows the route of the old Westport to Achill railway, which closed in 1937.

Start it in Westport and head out past Newport and Mulranny before reaching Achill Sound, to enjoy simply stunning scenery along the way including Clew Bay and Clare Island, the Nephin Beg Mountains and, of course, Croagh Patrick.

Hotel Westport is a great place from which to tour some of the most beautiful stretches of the Wild Atlantic Way, which literally passes its door. Other nearby points not to be missed include beautiful Keem Strand, Killary Harbour – Ireland’s only fjord – and Downpatrick Head in Ballycastle, with its stunning cliff-top views.

If it’s sea swimming you’re after, Mayo’s beaches are hard to beat, from Ross Strand in Killala, to Bertra and Caramore in Louisburgh, Keen Bay in Achill and the islands of Clare and Inishturk.

Clew Bay, just behind Hotel Westport, is famous for having an island for every day of the year, with Clare Island being among the most beautiful.

The island itself is another great option for anyone looking for an activity break. It has some fabulous accommodation options too, including Clare Island Lighthouse, the keeper’s cottage now converted into a luxury holiday offering which owner Roie McCann describes as a “great escape” that can still the busiest mind.

Think of it as a de-luxe Caribbean resort off the west coast of Ireland – it comes with the option of its own private chef, with breakfast, dinner and wine included.

Because nothing stills the mind quicker than an active body, take the opportunity to go walking and explore the island, or hire a bike at the quay. It’s where you get collected when you arrive to stay at the lighthouse. Bring your dog, it’ll be more than welcome at Clare Island Lighthouse.

The island is 6km x 8km, so there are plenty of walks and lots of cliffs from which to watch the fulmars, kittiwakes and puffins. There’s a lovely cove for swimming, a hidden gem often missed by visitors, consisting of a lagoon and waterfall.

You can also opt to stay at Red John’s, a beautifully restored cottage overlooking the sea in an even more remote part of the island but still only a 15-minute walk to the pub. In fact, there are two pubs to choose from, Sailor’s Bar and the Anchor Bar, both of which serve evening meals, and delicious chowder.

Visit Ballytoughey Loom, located on the island’s north side – close to the lighthouse, where visitors can enjoy the weaving and spinning displays, and even try their hand at it.

If you’re on a budget, stay at the Go Explore Hostel, which can organise a range of activities including rock climbing, abseiling, coasteering and raft-building, in conjunction with Clare Island Adventures.

Alternatively, solo travellers can save on the dreaded ‘single supplement’ by booking one of the newly renovated Snugs at the Clare Island Lighthouse cottage.

The former ladder room now holds two new Snug units, which are great for singles at just €400 for a two-night stay. The Snugs are self-contained pods, with their own wetroom, bathroom and patio on a cliff.

Otherwise, a two-night stay at the Clare Island Lighthouse costs from €1,000 to €1,200, for two people, staying two nights. The food is all-inclusive and all beautiful too, with as many locally sourced ingredients as possible. Think of it as being a culinary as well as an outdoor adventure.

Head north-west for a great escape

Have an adventure, or several, in the Maritime county