It is also the infrastructure that will enable smart cities, remotely controlled surgery, drone deliveries and more 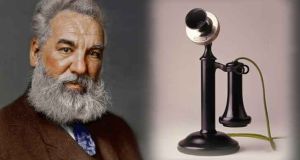 We’ve come a long way since Alexander Graham Bell had the world’s first phone conversation in 1876.

To understand the possibilities of 5G, you first have to look back.

“Mr Watson, come here – I want to see you” is credited as the world’s first ever phone conversation. It took place in 1876, between Alexander Graham Bell and his assistant.

It took just more than a century, until 1979, to the launch of the world’s first commercial 1G mobile network, by Japan’s NTT. Since then, the pace of development has been accelerating.

The move from 1G’s analogue voice to 2G’s digital voice took a further decade. Ireland’s first 2G mobile network was launched in 1993 and was initially limited to voice calls only – it took a few more years until we could also send and receive texts.

Now we have 5G. Vodafone Ireland was the first to launch it here, in August of this year. It operates alongside existing technologies to provide faster data speeds and better connectivity.

What 5G does is enable connectivity between wireless devices, such as in machine-to-machine communications and the internet of things. It is the infrastructure that will enable the much-vaunted smart cities, autonomous vehicles and drone deliveries of the future.

It will lead to exponential growth in communications, and not just between people. The International Telecommunication Union, the UN agency for information and communications technologies, anticipates increases in mobile broadband traffic of between 10 and 100 times over the next decade. It reckons the number of connected devices on the internet will reach 50 billion by 2025.

For consumers, perhaps the best way to understand it, suggests Debbie Power, Vodafone Ireland’s country manager for the internet of things, is that in the time it currently takes to download a movie, you can expect to download a whole boxset.

It means an end to buffering delays, glitchy video calls and laggy games.

More importantly, however, it will be the engine driving innovations across a range of areas, from 3D video to industry automation to remote medical services.

Though it will take time to fully build out 5G networks, when deployed they should deliver far greater speed and capacity as well as eradicate delays – known as “latency” – for time-critical applications.

5G will support devices and services that have not yet even been invented but could have transformational power for entire industries, from healthcare and transport to entertainment and education.

It has the potential to create the kind of paradigm shift seen previously with the advent of electricity or the internal combustion engine.

It is already enabling the fourth industrial revolution, automating factories and allowing for the remote control of critical infrastructure. It provides the rails for the internet of things – seamlessly connecting the sensors that will be embedded in almost every piece of equipment imaginable.

The rollout of 5G is not without its challenges, however. Its increased capacity and data rates require more spectrum, coming from high-frequency bands above 24 GHz, which poses considerable challenges. The first is the fact that these radio waves travel over much shorter distances than those of medium- (between 1-6 GHz) and low- (below 1 GHz) frequency bands.

To provide coverage in any given location means more base stations and more complex infrastructure, including the radio equipment on street facilities such as traffic lights and lampposts.

Spectrum is also a scarce resource, and one for which there is growing competition. The World Meteorological Organisation recently called on governments to protect radio frequencies allocated to potentially lifesaving weather forecasting services, for example.

There has been push-back against 5G, with some expressing concerns about health risks, and others about security fears. Rural dwellers still trying to participate in the benefits of 3G and 4G may be somewhat sceptical.

Once such fears are allayed, and killer applications arrive, the benefits should be both clear – and global. “Developing nations have rivalled or surpassed their industrialised counterparts in benefiting from the deployment of mobile technology, and there’s every reason to think 5G will have an even bigger levelling effect than its predecessors,” says the World Economic Forum, which estimates that the global economic impact of 5G in new goods and services will reach $12 trillion by 2035.

Even before its launch here, the new network was bringing opportunities to us too. Software developed in Ericsson’s Athlone R&D Centre, which employs more than 1,000 people, is vital to making 5G a commercial reality across the world. It houses a full spectrum of network and IT competencies needed to systemise, build and support next-generation network management systems for Ericsson.

Networks are being built on the Ericsson Radio System which will support new technologies such as artificial intelligence, the internet of things, connected cities and self-driving cars. Over the past five years, Athlone engineers have filed more than 60 patents.

5G also allows for network slicing – dividing a single connection into separate slices to, for example, give different traffic types a different priority.

From there, the possibilities are endless. “Take remote surgery, a situation which can be an actual matter of life and death,” says Debbie Power.

“What 5G can enable is having a surgeon on one side of the globe and a patient on the other, being operated on via robot. It means that whether you are in west Cork or India, you have access to that surgeon’s expertise.”

Welcome to the 5G future: Here’s how the world is about to change

Fibre or 5G? A bit of both is best for rural broadband

Healthcare and surgery to be transformed by 5G

Smart Cities: How 5G is helping to make the urban connection