Rugger brothers: the sporting ambitions of the Kearney boys

The rugby playing Kearney brothers tell Una Mullally about their sporting hopes, those falling out of nightclubs rumours, and who cooks their Christmas turkey 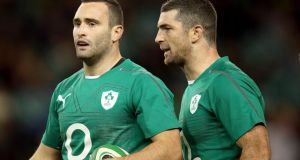 Rob Kearney (on right) congratulates his brother Dave after he scored a try against Samoa last month. Photograph: Dan Sheridan/Inpho 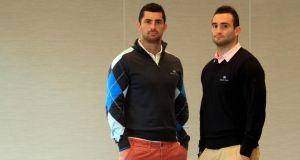 ‘Jesus!” Rob Kearney says. I am pitting him against his brother, Dave. What are each other’s best and worst traits, on and off the pitch? “We’ll be fighting after this,” Dave says. Rob thinks about the question. “We won’t be having Christmas at home at all now.”

At Druid’s Glen Hotel in Wicklow, there are a few squirrels playing on the other side of the window and a young chap bombing around in a golf buggy. In the lobby, there are Jurassic Park-type water-in-the-glass tremors on the floor as a clutch of Irish rugby players are moved around for a photocall set up to plug the hotel and golf resort.

It’s always kind of odd seeing a load of rugby players in the flesh. On the pitch they’re barrelling into the opposition, clashing bodies, gurning through their gum shields as they land a try. But out of stadiums, they’re much more zen, gliding around almost like South Park characters, existing behind the tinted windows of the types of cars wealthy professionals drive, pulling in to stylish bachelor pads and Instagramming photos of their pedigree, manly dogs.

Over the past decade or so, Irish rugby players have managed to portray a type of masculinity that is one part brutishness, one part suave, one part athlete, one part new man. Blame O’Driscoll, maybe, but it’s an infinitely marketable combination.

And nothing is more marketable than brothers. Rob and Dave Kearney, bound towards a table. The younger, Dave (24), is sporting black Nike Blazers trainers and a nice watch he got as a 21st birthday present a few years ago. The older, Rob (27), is bigger, and wearing what can only be described as salmon-coloured trousers. What I previously mistook for a tan on Rob are actually freckles.

The brothers, who are from Dundalk, started with Gaelic football, then rugby at Clongowes Wood College. Rob excelled first, playing for Leinster at schoolboy level and then UCD during his Arts degree. He had a dream debut as a senior player for Leinster, scoring three tries. His international career ran parallel with club and college, representing Ireland all the way up. He knows what winning feels like, after Ireland’s dream Six Nations in 2009. He’s been a Lion twice, in 2009 and 2013.

Coming up on the inside is Dave, the softer spoken (sometimes to the point of inaudibility) of the two. Like his older brother, he’s good at debuts, scoring two tries during his first cap for Ireland. Rob is incredibly fast and dexterous; Dave is strong, head down, fizzing potential, understated.

“Did we ever play Gaelic together?” Rob asks Dave when they’re trying to remember their first sporting interaction. As kids, they’d mess around in the garden, or on a golf course, or playing tennis. But their first proper game together on the same team wasn’t until 2009, Dave’s first cap for Leinster. “I suppose, it’s always going to be the older one, isn’t it?” Rob says, talking about who was the dominant sportsperson as a child. “Then Dave slowly started to catch up with me, and he’s overtaking me now.”

It must be great fun, all the same, for their family to watch matches where two sons are playing.

“Siobhán Kearney doesn’t think that!” Rob says of their mother. “I think she gets nervous before the big games,” Dave adds. “I think she enjoys the before and the after, if no one gets hurt,” Rob says, “but the 80 minutes? I’m pretty sure she doesn’t enjoy it too much. Dad’s the ultimate rugby fan, loves rugby, loves everything about it.” Dave says their father David is at the game about three hours before kick off – just in case he misses anything.

There’s plenty of rugby talk, but what about downtime? The press acts as though rugby players are like furniture in nightclubs, but the Kearneys say different. This idea that women are throwing themselves at rugby players in clubs, do they think that’s stuff is exaggerated?

“You’re asking the right man,” Rob says, handing over to Dave, who shakes off the joshing with a smile, “I’d say it is [exaggerated]. As Rob said, come game time you want to get yourself in the best place you can be. Going out at night and that kind of thing, it’s not something that we as rugby players get to do that often. It’s not like we go out every weekend and have all this attention around us. I think we try to go out as little as possible, especially in season.”

That’s not how it’s portrayed though, something that frustrates Rob. “There’s often been times that I’ve stayed in the full weekend, literally not left the house from Friday evening to Monday morning, and you’ll read something in the paper that you were out smashing bottles of Champagne in one of the nightclubs. That side of it is annoying. Because of that you can sometimes get reputations, because when people read something in the paper, well, it’s gospel. That’s just the way it is.”

Plenty too, was written about the heartbreaking loss a few weeks ago against the All Blacks.

Rob makes light of it, “I caught Dave crying in the living room,” he says, baiting his brother again. Dave is messing with a teaspoon, balancing it on top of a cup, the clinking bringing growing irritation to Rob. “He’s the real sensitive one between the two of us.” Rob snatches the offending spoon away. “Rob had a bottle of Jameson in his hand, drowning his sorrows.”

Then the actual truth comes out. “Nah, nothing like that, the same we do after every game,” Rob says. “We were pretty sore. Chilled out. Watched the game back a couple of times, nothing too different than what we do after any other game, probably just in a little bit worse form.”

The key question is, how giant is the Kearney turkey, to feed a family of rugby players? “Pretty big,” Dave says. “The one that came through last year was by far the biggest turkey we ever had, because it had to do 13 people for two days.”

Presumably, with such a giant meal, they all muck in? The slagging starts again. “I do yeah,” begins Dave. “Now, hmm, David doesn’t really,” Rob says, in mock assertion. “I’m sort of more the man around the kitchen.” Dave starts rolling his eyes.

“I like to take on quite a bit of responsibility at Christmas,” Rob continues, getting into it. Dave cuts him short. “I’d be impressed if Rob knew where the Aga was.”

There are going to be plenty of kids getting rugby balls and jerseys from Santa in a couple of weeks. Rob’s advice? He was told as a child to dream big. And he still does. Both brothers instantly say “World Cup Champions” when asked about their ambitions.

“There are no limits to what you can achieve,” Rob says, “Don’t let anyone ever say you can’t do it, because you can. If you want it badly enough you will achieve it.”