This referendum is a vote on whether we want a safe, regulated and legal system or to continue the unsafe and illegal system we allow today 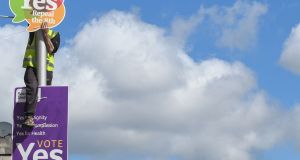 A man puts up a poster urging a ‘yes’ vote in the referendum to repeal the eighth amendment of the Irish constitution. ARTUR WIDAK/AFP/Getty Images

But remember this. You don’t have to agree with abortion to vote “Yes” to repeal the 8th.

The decision to terminate a pregnancy is deeply personal and can be terribly painful. Nobody takes the decision lightly. In Ireland, it is usually taken in loneliness and suffering. Women often feel isolated and rejected and, in this country, don’t have anywhere to turn to for professional advice and compassion.

You all know women who have had terminations. You just don’t know who they are.

People find themselves sometimes in situations that are difficult for us to imagine. And those situations are made worse by our silence and rejection.

There may be reasons why abortion is not a great idea. But there are also many reasons why we need to trust women who make the decision to have an abortion.

Also, almost more importantly, we need to acknowledge that women are taking that decision every day and are doing themselves harm, in some cases, because they cannot seek professional help or advice.

And you need to trust us, as doctors who are prepared to help, to give that professional advice. And to follow through on that advice.

My experience is that abortion is a difficult decision for all involved. It is never straightforward. But it is the woman who needs to be allowed to make that decision.

It’s complicated. And it’s much too complicated for the Eighth amendment.

In order to bestow these rights on a foetus you have to take autonomy away from that woman. What this actually leads to is that the “unborn” gains more rights than the woman who’s carrying it.

This is a terrible injustice. There is no definition of what unborn means. A single-cell organism, a zygote, immediately after fertilization? It may contain all the essential factors for development, but these factors exist as an encoded set of instructions localized in the genes of chromosomes. These genes aren’t even activated at conception. How can we possibly state that this organism, although it may well be part of the continuum of human life, which starts with sperm and egg, has the same rights as the woman in whom the fertilisation occurs?

And embryos are spontaneously aborted all the time. Estimates range from 20 to 60 per cent.

To create an article in a constitution that attempts to equate embryonic and foetal life with the rights of a living, breathing, functioning, sentient, emotional, often family- sustaining woman was misguided.

The 8th led to maternal death. Don’t believe the “No’s” when they tell you it didn’t. They are wrong.

The 8th led to me, as a GP, having patients who had to travel to England for abortions that were absolutely necessary for their continued health. And a “No” campaigner may tell you that that isn’t true, there aren’t any circumstances where an abortion would be necessary. Listen to this. This is the truth. These women risked death without an abortion.

The 8th led to, and still leads to, heartache and pain in women today. Your sisters. Your mothers. Your wives and partners. Your girlfriends. Your friends. Your daughters, for goodness’ sake.

And if these women, in adverse circumstances, decide to carry a pregnancy to term, then we need to support them to the absolute hilt. And society needs to change how it does that.

But, by the same token, if these women decide to have an abortion, don’t judge them. Support them. Give women the option to make their own choices.

The vote on May 25 is not about introducing abortion to Ireland; abortion already exists. Thousands of Irish women are accessing abortion services every year, either by travelling abroad or by using unregulated online abortion pills. This referendum is a vote on whether we want a safe, regulated and legal system or to continue the unsafe and illegal system we allow today.

Please have the courage to grant women in Ireland the time and space to make an often hard and lonely decision for themselves, without the fear of fourteen years in prison. And to grant the professionals who can help them the facility to do so without fear of the same.

Get rid of this amendment.

Nick Breen is a GP and Senior Clinical Lecturer in General Practice at UCD. He is a member Doctors for Choice.