With Ruth Negga, we have disgraced ourselves again

Familiar to an Irish TV audience as Rosie is Stuart Carolan's 'Love/Hate', Ruth Negga's career has gone from strength to strength since, appearing in Hollywood films 'World War Z' and 'Loving' 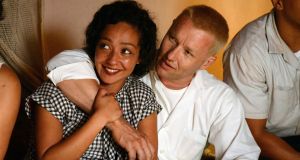 Ruth Negga in Loving. The most important aspect of Negga’s Oscar nomination was that grave offence was caused to our nation by the Brits - going on their airwaves and into print to steal one of our own. Reverting to type.

Ruth Negga, nominated yesterday in the Best Actress category at this year’s Academy Awards, has been described in various media over the last 24 hours as being “from Limerick”, “Irish-Ethiopian”, “Irish” and “British”. Spot the trigger word in that sentence.

When BBC Radio 4 and the Evening Standard newspaper displayed “colonial aggression” yesterday in referring to our Ruth as “British”, we wailed in wounded grief before proceeding to pick up our digital forks and march on these agents of perfidious Albion.

Ruth Negga was born in Ethiopia to an Irish mother and an Ethiopian father. She lived in Addis Ababa until she was four. She then lived in Limerick (with spells in London) until she was 24. She has been living in London for the past eleven years.

It is the sole authority of Ruth Negga to describe her nationality and sense of place in whatever way she sees fit.

But numerous Irish people - who have never met the actress and wouldn’t have known that much about her until yesterday’s nomination - are taking aggrieved indignation and offence on her behalf. It’s our martyr complex in its full throes of victimised ecstasy.

As little Irelander nationalistic thrills go, it’s almost up there with throwing ourselves on the floor in paroxysms of anguished hurt whenever anyone refers to Ireland as being part of the “British Isles”.

There’s one voice missing from the running battle about the actress’s nationality, that of Negga’s herself. In an interview with the Guardian last year, she spoke about her sense of self and belonging, saying “”My feelings of difference were down to having parents of different races, I had quite a scattered childhood, I was Irish in London because I had my secondary school education there. I never really fitted in anywhere”.

She has also said “People have always made assumptions about me. I become very territorial about my identity because it’s been hijacked by so many people, with their own projections.”

But this is Ireland so how the woman feels herself has really nothing to do with it. The most important aspect of Negga’s Oscar nomination was that grave offence was caused to our nation by the Brits - going on their airwaves and into print to steal one of our own. Reverting to type.

This Negga controversy has come at a sensitive time for us. We’re still a bit raw and hurt over Sky News TV presenter, Richard Suchet, referring to Carlow’s Saoirse Ronan last year as “British” following the actress’s BAFTA nomination for Brooklyn.

Despite Suchet correcting his mistake and apologising for it, we made an ignominious disgrace of ourselves. The public comments about Suchet’s mistake from people in this country drew attention to the fact that Suchet, being Jewish, “should have known better considering the oppression his people went through seventy years ago”.

We referred to Suchet as a “bigot”, adding for good measure that “his entire family are bigots”.

This was a reference to Richard Suchet being the nephew of the famous actor, David Suchet and the well-known broadcaster, John Suchet.

Keeping with his family, some Irish hero publicly wrote “I wonder what nationality Richard Suchet’s dead aunt was?”. This was a truly despicable reference to the fact that Richard Suchet’s aunt, Bonnie Suchet, had died a year previously after a ten-year battle with dementia.

And all of this was doing what exactly for Saoirse Ronan?

In what should have been a time of recognition for Ruth Negga’s magnificent performance in the film “Loving”, we are neurotially scanning media dispatches for erroneous reports of her nationality. Once we hit the “ Irish person described as British” jackpot, we react with infantile pettiness, mean-minded malice and digital displays of self-immolation.

And whatever about the Brits, we need to get stuck into the grasping, thieving Ethiopians. A story in the Ethiopian Reporter newspaper describes Negga as “ the Ethiopian born actress” and goes on to cunningly and tendentiously refer to her as “Ethiopian-Irish”. They’re as bad as, if not worse than, the Brits.

Who’s up for a march on the British and Ethiopian embassies, singing “We Shall Overcome?”