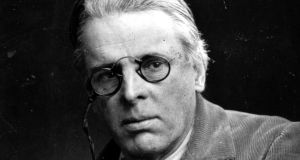 The British pound is at a 30-year-low, as you will have heard. But as you may not have heard, another hard currency – the poetry of WB Yeats, and one poem in particular – is at a 30-year-high. And it appears the two trends are in part related.

The poem in question is of course The Second Coming, Yeats’s vision of the apocalypse, circa 1919. Which, according to a recent feature in the Wall Street Journal, based on analysis from a media database called Factiva, was more quoted in the first seven months of 2016 than in any other year of “the past three decades”.

The reasons were threefold: “Terror, Brexit, and the [US presidential] Election”. Thus, one of the biggest peaks was on June 24th, the day after Britain’s referendum, when the poet’s lines, especially “things fall apart; the centre cannot hold”, were in much demand among desolate remainers.

‘Pitiless as the sun’

In fact, although it’s not one of the poem’s more quoted parts, even the bit about “a shape with lion body and the head of a man,/A gaze blank and pitiless as the sun” seemed vaguely fitting in the context, given Trump’s leonine mane and colour scheme.

In the meantime, “somewhere in sands of the desert”, there was the continuing spectre of Islamic State, and its various missionaries in Europe. As Yeats’s biographer Roy Foster, commenting on the WSJ’s figures, put it mildly: “I think we have seen rough beasts arise, notably in desert countries.”

The impressive thing about the latest surge in The Second Coming’s share price is that it came off an already high base. When I last wrote here about the poem’s extraordinary quotability, 18 months ago, I was noting the verdict of the Paris Review, which called it “the most thoroughly pillaged piece of literature in the English language”.

Part of the poem’s genius, we know, is that Yeats stripped it of any reference to the events that immediately inspired it. It was written against the backdrop of Irish and Russian revolutions and a world changed forever by war. The poet was said to be especially worried about Marxism “as the spearhead of materialism [...] leading to inevitable murder”.

So among the first rough-beast candidates must have been Lenin, who not long before had slouched out of exile – albeit not in the desert, but in Switzerland, via a sealed train, through Germany and Scandinavia – to attend the birth of Bolshevism.

But Yeats left it to Churchill to express the portent of that journey: “They [the Germans] transported Lenin in a sealed truck like a plague bacillus”.

Meanwhile, restricting his own temporal references to “twenty centuries of stony sleep”, Yeats wrote a poem that would also serve for the rise of Nazism and the many other threats to civilisation since.

Now, nearly 100 years on, it still fascinates. Just as Joyce set enigmas and puzzles to “keep the professors busy for centuries”, so it seems did Yeats. But the latter did it in 22 lines.

The impending centenary of the Russian revolution, by the way, has inspired a new book about the aforementioned journey, Lenin on the Train, by Catherine Merridale. And I was reminded both of the Churchill quotation, and of The Second Coming’s enduring appeal, by a review of that book in the latest Spectator magazine.

So it would not be inclined to invest in Yeats’s imagery as a predictor of post-Brexit Britain. Nor did the poem feature in its Lenin review. On the contrary, I had reached the latest issue’s last page without seeing a reference to The Second Coming anywhere. Then, finally, there it was: a major sub-theme of the wine column, in which Yeats’s doom-tinged reflections were balanced by the consoling effects of a 2004 Spanish Rioja.