Why the religious right is now the biggest threat to Trump 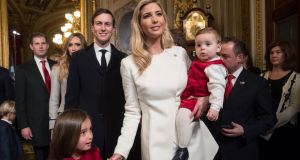 Ivanka Trump, with her husband Jared Kushner and their children. The socially liberal couple claim the credit for persuading Trump not to roll back Obama-era LGBT workplace rights. Photograph: J Scott Applewhite/EPA

As Melania Trump continues to play Rapunzel in the Trump Tower and now seems to be indicating she may not be moving to White House at all, the East Wing of the White House (the offices of the First Lady) has just come into focus.

The acting first lady, Ivanka Trump, and her husband, the inconveniently lifelong Democrat Jared Kushner, flexed their familial muscles over the weekend when they let it be known – via the “sources close to” journalistic route – that it was they who persuaded Trump not to roll back Obama-era LGBT workplace rights. Blood is thicker than Breitbart water.

In essence, the pound of flesh the religious right were trying to extract from Trump was that he sign an executive order to the effect that employers who discriminated against gay workers would be be protected from prosecution under the law on the basis of their “religious freedom” to do so. If God says it’s ok to discriminate, then it must be, runs their logic.

As socially liberal thirtysomethings, Ivanka and Jared “helped lead the charge to scuttle a draft executive order that would have overturned Obama-era enforcements of LGBT rights”, according to a story on the Politico website which goes on to add that “sources close to” the couple say they have “a record of defending gay rights”.

As the capo di tutti capi, Trump places great, and sentimental, emphasis on family – hence the elevation of daughter and son-in-law to unassailable status within the Oval Office. How much of a favoured son-in-law Kushner has become is evident in the reliable reports that Trump requested top-security clearance for him to attend the presidential daily intelligence briefings while he was still president-elect. The Jewish Kushner also functions as a firewall against the allegations of anti-semitism that dogged Trump’s campaign.

The LGBT story was a power-play. Trump’s heart was never in rolling back the legislation. However far-right he is on certain key issues, he’s a cosmopolitan New Yorker who has worked his whole life in the hospitality sector, where sexuality just isn’t an issue.

By letting the media know through a carefully choreographed story that it was Ivanka and Jared standing up for gay rights, it absolves him – temporarily – from the wrath of the foaming-at-the-mouth religious right. But, as is the case with fundamentalists, the religious right are not going away.

The motley coalition of freaks, bigots and fundamentalists who make up the religious right in the US are furious that the “religious freedom” to protect them against prosecution for discriminatory practices is now not being enacted.

An unexpected soft underbelly in the Trump administration has just been exposed. The furious liberal backlash against Trump’s first round of executive orders was to be expected – but now a new front has opened up, and US political history tells us that the enemy within is the most dangerous.

But both Reagan and George W Bush evoked their Christian beliefs during crucial moments of their presidencies. Reagan, at the height of the Cold War, described the Soviet Union as “an evil empire”, and Bush justified the invasion of Iraq with his statement to the BBC that “God told me to end the tyranny in Iraq”.

Reagan and Bush believed themselves to be serving God. But Trump only serves Mammon.

In his prior business life Trump was notorious for not honouring his debts. The Wall Street Journal reported last month that more than 150 financial institutions still hold multimillion-dollar debts connected to Trump.

If the religious right don’t see a return for their investment in a Trump presidency, they will act out.

Trump prepared himself for the strident opposition of “liberal losers” to his administration, but not for the evangelical zeal of the religious right. In refusing to roll back LGBT rights, he has just given them their first round of ammunition.

And he should look up how Christians define the word “deliverance”.