Una Mullally: Why Stephen Donnelly’s migration to FF is so dispiriting

Former Independent and Social Democrats TD is joining FIanna Fáil and will take on the role of Brexit spokesperson. Video: Bryan O'Brien 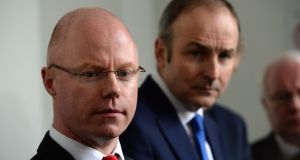 In David Attenborough’s recent reboot of Planet Earth on BBC, a Buller’s albatross waits mournfully for its mate to arrive. After six months apart, it doesn’t look good. Other birds strut by, delighted with their lot. Eventually, our albatross’s mate arrives, and an elaborate greeting dance ensues before they get down to business. All is well.

There is some relief, for those of us who were occasionally irritated by Stephen Donnelly’s jostling for attention, that he finally settled down, soaring towards his long-lost mate. We may have thought his game of political Tinder, swiping left and right depending on the day, and turning the many panel shows and radio programmes he appeared on into his own personal performance of Blind Date, had ended with the Social Democrats. But power and personal gain must have felt out of reach for Donnelly with the Soc Dems. The waiting and the elaborate dances would continue.

We may like to imagine that Irish politics is exciting enough to recall another Planet Earth scene, the baby iguanas dramatically running for their lives as they are chased by ravenous snakes. But, in reality, the enterprise has more in common with that of the three-toed sloth, painstakingly making its way towards a tree full of hope, only to realise that was the wrong destination and it now has to start all over again.

But Fianna Fáil and Donnelly? That’s some albatross.

“I’m more concerned about the future of the country now than I was when I first got into politics,” Donnelly said.

Well, you would be if you just joined Fianna Fáil. On Drivetime on RTÉ, when asked why he was joining Fianna Fáil, Donnelly replied: “What’s important to me is we need new thinking, the centre needs to hold, it needs to have a better way forward that’s much more inclusive and sustainable. We’re going to have to have a lot more ambition.”

That statement is of course meaningless, a string of magnetic buzzword blandness that is creative only in its obfuscation. So do we blame the individual or the system? Whose fault is it that the blindingly bright light of Donnelly couldn’t find another political mate in Leinster House? And what should one’s motivations as a political and public servant be? To serve one’s constituents and the people of Ireland? Or to manoeuvre oneself into the most tempting position of power regardless of where that is and what that stands for, and hope that everyone forgets that’s the opposite of what you insinuated you were setting out to do?

Donnelly’s journey from altruistic outsider to Fianna Fáil hack is complete. Here is a guy who postured as someone who wanted to make a difference and change things, yet is retreating to the “stale cartel” (Donnelly’s words) of the Fine Gael/Fianna Fáil axis. Ideologically – if any ideologies truly exist in Irish politics at all – Donnelly could also have aligned with Fine Gael, but there are plenty of young bucks in there already, and a seat at cabinet level would be less likely. Eyes on the prize.

Donnelly’s insistence that his supporters in his consistency were urging him to join Fianna Fáil beggars belief. Ultimately, he has shown his loyalties to be to a party of one.

I’m sure Donnelly hopes that his transition into Fianna Fáil – a party he spent plenty of time trashing – will be smooth, but why should it? Why give politicians who turn their backs on the ideas they sold us an easy time of it? Donnelly’s integrity is in tatters. Spin and PR and flatter and dance as Fianna Fáil will, and try as journalists might to report all of that with straight faces, it’s over for Donnelly among the voters who trusted him, who took a punt on his PR, who believed that his dynamism and enthusiasm and ambition meant he was different.

Those who think Donnelly’s move to Fianna Fáil is smart and strategic are the type of people who say, “Michael O’Leary should run the health service!” and who thought Seán Gallagher would make a great president. The electorate is expected to swallow such strategy as all part of the game, and to accept that opposition to the game is naive.

I sympathise with politicians who despair at the way the profession is denigrated, but who is at fault for this widespread cynicism? Why is that people don’t trust them or believe them? Donnelly’s actions can be dressed up as pragmatism or realpolitik, but the reaction is understandably a scoffing one.

Then there’s the bigger picture. Donnelly’s migration to Fianna Fáil also signifies the end of post-crash ideas. For those of us who longed for political alternatives, Donnelly seems to confirm that such aspirations for change are hopeless.

The same old faces, and variants of them, populate Leinster House, and the wishful thinking that those who rose to power on a wave of anti-Fianna Fáil sentiment would inspire new ideas, and new ways of working, is gone. The window of opportunity has shut.

With Fianna Fáil on the rise again, and Fine Gael in power, the cartel will keep dealing. And when it comes to the spin, we don’t have to look to Kellyann Conway for alternative facts, because Donnelly’s the one who’s going to be selling them to his constituents.