Why I want to reclaim the C-word for myself 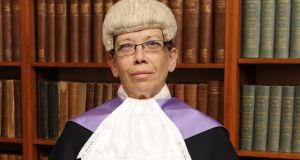 ‘Judge Lynch replied, with learned accuracy: “You are a bit of a c*** yourself”.’ Photograph: David Barrett/Photoshot

In this foul-mouthed world there is one word that still has the power to get people hot under the collar. It did in Britain last week, anyway.

John Hennigan (50), who had breached his anti-social behaviour order (Asbo) by using racist language towards a black woman and her two children, told Chelmsford crown court judge Patricia Lynch QC last week that she was “a bit of a c***”.

Judge Lynch replied, with learned accuracy: “You are a bit of a c*** yourself.”

When Hennigan screamed back “Go f*** yourself”, the judge replied: “You too.” (And no, neither of them used asterisks in this exchange).

Hennigan, who reportedly also shouted “Sieg Heil” and banged the glass panel of the dock, was jailed for 18 months. He got an Asbo in 2005 when a swastika was discovered daubed on the front door of his council house. Given the charge in front of Hennigan, and his own linguistic choices, Judge Lynch’s use of base language sounded quite eloquent. She is now a hero in any language.

In spite of her social media hero status, Lynch has incurred the wrath of Britain’s Judicial Conduct Investigations Office, which handles complaints made about judges both in and outside court. The body reported that it had received a number of complaints about the incident. They have not reported if their response will be a Hennigan-inspired “Go f*** yourself” as their verdict is not yet in.

Never has a four-letter word f***ed with so many heads. No, not even the F-word has done such damage.

In 1796 Francis Grose said the C-word was “a nasty name for a nasty thing”. Almost four centuries later, the Oxford English Dictionary explains the word’s commonest contexts as both “female external genital organs” and as a “term of vulgar abuse”.

Sexual Politics author Kate Millett probably wrapped it all up best when she explained that “somehow every indignity the female suffers ultimately comes to be symbolised in a sexuality that is held to be her responsibility, her shame. It can be summarised in one four-letter word. And the word is not f***, it’s c***.” (She didn’t use asterisks either, in case you were wondering).

Not being able to understand how my inoffensive nether regions could cause such great insult, I have steered clear of using the C-word, choosing another C-word (sorry guys) to bandy around as invective. It was time to use men’s nether regions to multitask – and insult. I was cock-sure about that.

But I have changed my mind. If the C-word bristles with the power to shock, awe and annoy, then I want that power to be mine.

That power has been there for centuries. In 1230, Gropecunt Lane in London seems to offer the first recorded outing for the word, although it was used regularly by the Anglo-Saxons as a factual name for the vulva or vagina.

The C-word has literary pedigree. It really does. Chaucer used the C-word in The Miller’s Tale. Admittedly it was the “Q-word” when the middle Englander used it, but you know what he meant. “Pryvely he caught her by the queynte,” Chaucer wrote.

Shakespeare used the C-word too. Well, he didn’t spell it out, being far less explicit than that. He did mess with “country” word play as Ophelia lay in Hamlet’s lap, though.

And Beckett, who was being totally literal, wrote in Malone Dies: “And even his young wife had abandoned all hope of bringing him to heel, by means of her c***, that trump card of young wives.” (Nor did Joyce or Beckett use asterisks – but you knew that).

Meanwhile, the C-word continues to rile, repulse and take us for a ride.

The Oxford English Dictionary offers a list of words that rhyme with the C-word, if one should have need of them. “Affront, blunt, brunt, bunt, confront, front, grunt, hunt, runt, shunt, stunt, up-front.” Trump? Just a suggestion. Maybe the same rules that apply to the N-word should apply to the C-word. If you’re white, the N-word is not for you. It is not your choice to make.

If you have a c***, you can choose to recalibrate your use of the word. Make your own mind up. You’ve got the power.

1 Met Éireann set to issue orange alert as Storm Jorge approaches Ireland
2 Life as a Facebook moderator: ‘People are awful. This is what my job has taught me’
3 UK says it could abandon Brexit trade talks in June
4 Cancellations and confusion as coronavirus threat edges closer
5 Patrick Freyne on Love Is Blind: It’s Gilead, Love Island and Blind Date rolled into one
Real news has value SUBSCRIBE