Why Fintan O’Toole is wrong about this Government

‘He now believes that the economic turnaround was inevitable. It was not.’ 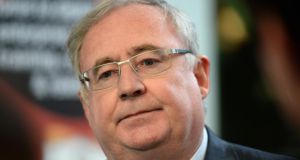 Labour TD Pat Rabbitte: ’The truth is that the policies advocated by O’Toole would have sent Ireland Inc to the wall’. Photograph: Dara Mac Dónaill/The Irish Times

Fintan O’Toole engages in regular cynical depiction of all acts of this Government.

His criticism would be reasonable if he also commented on the Government’s positive achievements.

But Fintan O’Toole’s line is that nothing has improved, nothing can improve, nothing will improve.

He now believes that the economic turnaround was inevitable. It was not.

The truth is that the policies advocated by O’Toole would have sent Ireland Inc to the wall: no pensions paid, no public servants paid and no public services. A crisis of such magnitude that the appalling collapse experienced by Irish society would pale beside it.

However, to sustain his narrative, Fintan O’Toole ignores the positives. So the promissory note deal is ignored, the retained value in what are now our banks is ignored, the reduction in the interest rate paid on loans to both the European Union and the IMF is ignored. The fact that the recovery is not proceeding at the same speed in other euro zone countries is ignored. Surely a turnaround is inevitable there too?

Last week Ireland’s growth figures were confirmed as the highest in the euro zone – so the Government must be doing something right?

If that is “progressive”, I think the Irish people could do without it.

The truth is that this Government has worked hard to protect spending in key areas such as social protection. We have not been able to fund all the resources that might be needed here – that is the product of circumstances we found ourselves in. But the need for balance and factual analysis is ignored by O’Toole.

The problem with the distributional analysis is that to be “progressive” at a time when you are cutting expenditure means you have to continue to increase taxation. That this might impact negatively on economic and employment growth is ignored by O’Toole. Given how central work and employment is to Labour’s philosophy, it is a fact we cannot afford to ignore.

He rails about the recovery not yet being felt in people’s pockets without acknowledging that the first tax alleviation measures are due in January. No mention of the first reduction in mortgage rates for fixed and variable rate customers in years, no mention of property tax variations in urban areas, no mention of reduced energy and fuel costs.

Next year we will hold a referendum on same-sex marriage. We have moved on transgender recognition. We have legislated the X case so this society can now begin to discuss what other circumstances it believes appropriate to allow terminations to women.

This year we have passed legislation on whistleblowers, and Freedom of Information. Ground-breaking lobbying legislation is before the Dáil. The Ombudsman’s powers have been extended. New ethics legislation is on the way. Labour legislation knocked down by the courts restored.

There is no expectation that people should welcome some of the things this Government had to do to rescue this independent State – but there is a legitimate expectation that a man who holds an exalted position in The Irish Times might accord to those with whom he disagrees a basic degree of reason and fairness.