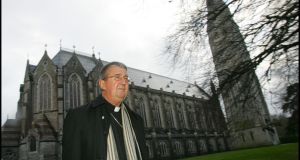 ‘Possibly the formation of such ministry might evolve along the lines suggested recently by Archbishop Diarmuid Martin of Dublin when he said he would like to see seminarians living in a smaller community from where they could be “linked to a particular parish while continuing their studies”. Photograph: Brenda Fitzsimons

Currently, the Irish Catholic Church has 67 men studying for the priesthood: 55 at St Patrick’s College Maynooth and 12 at the Irish College in Rome.

Maynooth alone was designed to cater for 500 seminarians. It has just over a tenth of that number now. Meanwhile the average age of the Irish Catholic diocesan priest hovers at around 67.

A 2013 study by the Catholic Bishops’ Council for Research & Development in Maynooth found that three-quarters of Ireland’s priests were aged between 45 and 74, with the largest proportion (27.1 per cent) in the 65-74 age group.

For example just one priest in Dublin diocese, the largest in Ireland, is under 40. This poses an obvious question: with such numbers and trends does the Irish Catholic Church need or can it afford either St Patrick’s College Maynooth or the Irish College in Rome?

As reported last week in The Irish Times, Fr Seán McDonagh of the Association of Catholic Priests (ACP) has said that, in the context of the recent Maynooth controversy, “we need a completely new structure of ministry in the Catholic Church in Ireland if we wish to have the Eucharist available to us in the future and have competent pastoral care for everyone”.

It would be a more realistic preparation for a life of service in the diocese, he said, while such seminarians could still study theology at Maynooth or some such institution in Dublin. It is a template that could be followed in other Irish dioceses.

Such an apprenticeship- style of training for the priesthood would appear to a more realistic way of training future priests, but it would also be far more cost-effective. It would mean the church need not be lumbered any longer with the huge financial burden of maintaining two large seminaries that have long-since outgrown their usefulness.

Of course letting one or other go, not to mention both, would be a huge emotional wrench for the church. Particularly its clergy.

We saw that in the rush of Catholic bishops and members of the ACP to Maynooth’s defence during the recent controversy.

The Irish College is older. Located in central Rome, it was founded in 1628 by Irish Franciscan Fr Luke Wadding and Italian cardinal Ludovico Ludovisi, a nephew of then Pope Gregory XV.

At a time when, during the penal laws period, seminaries for the formation of Irish priests were banned in Ireland itself by Protestant authorities, Irish colleges were established in Spain, Portugal, France, Belgium and Rome. There were 34 such colleges in continental Europe during the 16th, 17th and 18th centuries.

The Irish College in Rome is the only one still in church hands. With such history, and Rome being Rome, it is easy to see why it might be difficult to abandon such venerable tradition.

St Patrick’s College Maynooth was set up in 1795 by Grattan’s (Protestant) Parliament in Dublin to provide “for the better education of persons professing the popish or Roman Catholic religion”. From 1814 it became, solely, a seminary.

The main reason it was established was fear by authorities that Irish priests formed in the Irish colleges of continental Europe would bring back republican ideas of the French revolution to Ireland. Such thinking behind the setting up of Maynooth worked, and quickly, as the Irish Catholic bishops condemned the 1798 rebellion and supported the Act of Union in 1800 which saw Ireland ruled directly from London until 1922.

Students and trustees at Maynooth also had to take an oath of allegiance to the monarch. This was compulsory until 1862. It may help explain that general conformity to the wishes of authority, secular as well as ecclesiastic, which would become such a hallmark of Maynooth and most who attended there.