Why British soldiers belong on the 1916 Remembrance Wall 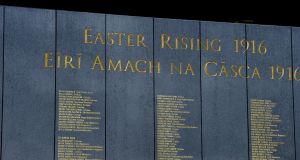 Forty-one of the British army names on the Remembrance Wall at Glasnevin are those of Irish men: Photograph: Cyril Byrne

Prior to the unveiling of the Remembrance Wall in Glasnevin Cemetery, some groups were campaigning against the inclusion of military and police names.

How, they argued, can Irish and British dead be remembered side by side? The reality of 1916 is that these terms are not mutually exclusive and to ignore a certain category of names would be to ignore fellow countrymen. Forty-one of the British army names on the wall are those of Irish men.

Private Patrick Leen from Rathkeale, Co Limerick, was mortally wounded on April 24th, 1916, dying later in the week. His mounted troop of 5th (Royal Irish) Lancers were the first British soldiers to arrive in the Sackville Street area during the early afternoon of Easter Monday. Fired on by insurgents inside the GPO, Leen was one of four soldiers who ultimately died. Years later, his family would alter the story of his death, claiming he had refused to fight the rebels, and had been executed by the British as a result.

Also killed that day were Captain Alan Ramsay from Ballsbridge, Dublin, and Captain Alfred Warmington from Mountrath, Co Laois – both of the 3rd Battalion, Royal Irish Regiment. Ramsay led an unsuccessful attempt to break into the South Dublin Union (St James’s Hospital) via the Rialto gate and was mortally wounded in the process. Enraged, his close friend Warmington stormed the breach with a second wave and was subsequently killed. Their foe: Commandant Éamonn Ceannt’s Irish Volunteers – fellow Irish men.

A 19-year-old Irish-speaking Catholic from Dublin, his home address was Usher’s Island – the very street on which the Mendicity Institution was located.

Shoeing-Smith Charles O’Gorman, a 22-year-old from Limerick city, was one of the reinforcements to arrive from the Curragh camp not long after the start of the Rising. He died in the fighting around City Hall during the night of April 24th.One of the men he died fighting against – George Geoghegan of the Irish Citizen Army, who was also killed at City Hall and who is also recorded on the Glasnevin wall – was a former Royal Dublin Fusilier and Boer War veteran.

Killed across the river Liffey from the Mendicity Institution by Heuston’s first volley, his death was later recalled by Irish Home Rule MP Stephen Lucius Gwynn in his 1919 book John Redmond’s Last Years: “The first volley which met a company of this battalion killed an officer [Neilan]; he was so strongly nationalist in his sympathy as to be almost a Sinn Féiner. Others had been active leaders in the Howth gun-running. It was not merely a case of Irish men firing on their fellow-countrymen; it was one section of the original Volunteers firing on another.”

Down the road from where Gerald Neilan died, his younger brother Arthur was serving in the Four Courts. Arthur survived the Rising and was interned in Wales. When he passed away in 1944, he was laid to rest alongside his British army brother Gerald in the family plot in Glasnevin, a short walk from the new Remembrance Wall.

The fact is that the Irish regiments of the British army stationed in Dublin in April 1916 were the first to respond to the Rising. The earliest battles were Irish versus Irish. On April 24th, Irish men in the British army outnumbered the insurgents 2 to 1. As more Irish units were summoned to Dublin, that soon grew to 3 to 1 conservatively.

Put simply, there were thousands of Irish men serving in khaki during Easter Week 1916, 41 of whom were killed in action. If the names of all sides had not been recorded on the Glasnevin wall, how could we have said that these fellow “children of the nation” would have been cherished equally?

Neil Richardson is a military historian and author of According to Their Lights: Stories of Irishmen in the British Army, Easter 1916 (Collins Press)