Core lesson remains that we must be competitive internationally to prosper

Former Governor of the Central Bank, TK Whitaker, is described by some of those who know him best as he celebrated his 100th birthday. Video: The Central Bank of Ireland 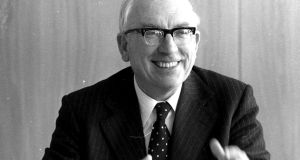 Although much in Ireland has changed over recent decades, the lessons learned from Dr TK Whitaker’s life’s work still reverberate today. His seminal 1958 study, “Economic Development”, which formed the basis of the first programme for economic expansion 1958-1963, set the course for the modernisation of Ireland’s economy.

At the time the study was published, this country was blighted by economic depression, chronic emigration, unemployment and near total dependency on the British market for exports. While most industrialised nations had experienced rapid growth in the aftermath of the second World War, Ireland’s largely agrarian economy had stagnated, drained of dynamism and entrepreneurial spirit by decades of misguided protectionist policies. By the late 1950s, the average income per capita in Ireland was less than half that of the most successful economies in Europe.

Whitaker’s plan prompted a seismic shift in economic policy away from protectionism and towards internationalisation. In the decade-and-a-half that followed, successive governments progressively opened the economy to global markets and foreign investment. Guided by Whitaker, the government abolished longstanding barriers to free trade, replaced prohibitions on foreign direct investment (FDI) with incentives aimed at attracting multinational companies, and signed the country up to trade deals such as the General Agreement on Tariffs and Trade and the Anglo-Irish Free Trade Agreement. Whitaker’s blueprint for structural change prepared the ground for Ireland’s eventual entry into the EEC in 1973 and set living standards on a path to convergence with advanced countries’ levels.

Whitaker’s strategy for economic development, driven by competitive export sectors and FDI, has allowed the Irish economy to prosper in a globalised world. We are now one of the most open economies in the world, with modern industries and knowledge-based services and an unrivalled record in attracting mobile investment.

Over recent decades, we have come to take free trade and access to global markets for granted. But political shocks such as the result of the Brexit referendum and the election of Donald Trump have put protectionism back on the global policy agenda. Depending on the nature of the UK’s relationship with the EU after Brexit, trade between Ireland and our nearest neighbour in the future may be restricted by trade barriers. Whitaker played a key role in efforts to improve relations between the Republic and Northern Ireland, yet the reintroduction of Border controls could severely impede commerce between the two parts of the island.

In the US, Trump has blamed free trade for the decline of traditional manufacturing sectors and for driving down the wages of many workers. His plans to reshape the global trading system may raise new challenges for businesses that export to that part of the world.

How should government and businesses be preparing to deal with these challenges? A core lesson contained in Whitaker’s work is that if Ireland is to continue to prosper in global markets it must remain internationally competitive. As Whitaker put it: “If we do not expand production on a competitive basis, we shall fail to provide the basis necessary for the economic independence and material progress of the community.”

To this end, identifying “potentialities” and “deficiencies” across the Irish economy, as Whitaker did so meticulously in “Economic Development”, and quickly changing policy and business practices if needs be, should be an ongoing exercise. For example, the short-term boost to the US economy from Trump’s plan to increase infrastructural spending and cut taxes will create opportunities for Irish businesses.

In a world of dramatic policy shifts and rapid technological change, agility is the key to growth and competitiveness. As Whitaker wrote: “Readiness to adapt to changing conditions is a sine qua non for economic success.”

A constant theme in Whitaker’s work that is also pertinent today is that economic growth is not an end in itself, but a means to improvements in human wellbeing. Throughout his career, Whitaker was passionately committed to ensuring that economic development delivered sustainable and inclusive societies.

That vision remains relevant today, with much work to be done. World leaders have yet to deliver a model of economic growth that meets the needs of the present without compromising the ability of future generations to meet their own needs.

In the US, for example, real GDP per capita has risen substantially since 1970, while real median household income has been largely flat. Such divergence is not sustainable. While Trump points the finger at free trade and immigration, other factors may be much more important, such as skill-based technical change, deunionisation and minimum wage policy.

Here at home, the housing crisis and homelessness continue to affect many families. Inspired by Whitaker’s evidence-based approach to policymaking, the onus is on researchers in Ireland and around the world to identify the true causes of these problems and to recommend remedial actions.

Ken Whitaker was born in 1916 and as we look to the next 100 years, Whitaker’s legacy challenges us all, researchers, policymakers, business leaders and citizens, to remember that, as he wrote, “we are not seeking economic progress for purely materialistic reasons” and demand the “establishment of a better social order, the raising of human dignity and, eventually, the participation of all” in the benefits of globalisation and economic growth.

Alan Ahearne is director of the Whitaker Institute for Innovation and Societal Change and Professor of Economics at NUI Galway.