What does Varadkar really think of priests?

Marriage equality and abortion votes carried only because of Catholic support 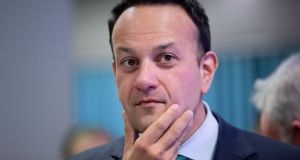 The Taoiseach’s remarks “will awaken and give a focus to the sleeping giant of traditional Catholicism”. Photograph: Tom Honan

The recent Dáil exchange in which Taoiseach Leo Varadkar compared Fianna Fáil leader Micheál Martin to “one of those parish priests who preaches from the altar telling us to avoid sin while secretly going behind the altar and engaging in any amount of sin himself” came as something of a shock.

The immediate reaction was one of surprise and confusion. What was this about? Was Varadkar just tired after a hectic schedule in Brussels? Was he just being smart-assed and playing to the gallery? Or was it that in the heat of the moment the truth came out?

Did we glimpse the real Varadkar, instead of the carefully-constructed media image of a leader happy and privileged to lead the very disparate communities that make up the new Ireland? Was this indicative of what he really thought of the Catholic Church and of priests?

The widespread condemnatory response to his comments was immediate and strong. The reason, I think, was that what he seemed to be saying was not just that the church had a lot to answer for (as we do); or that we should apologise for our failings (which we have) but that behind the facade of condemnation priests were living lives that contradicted what they were preaching.

We know that’s the worst possible accusation against a priest. And we know that tarring every priest with the brush of child abuse is unfair and unconscionable, but this is what the Taoiseach speaking in the Dáil chamber seemed to be implying. Whatever he said, whatever he meant, whatever the provenance of his words, I think this was why the response was so instinctive.

In fairness, the Taoiseach apologised and it was important and necessary that he did so. But it raises other issues. Does he mean it? And can we believe him?

When Pope Francis was here, even though some doubted Varadkar’s sincerity when he praised the contribution of the church in different areas of Irish life, more now wonder whether it was all just PR spin, scooping up Catholic votes before the next election.

So the question remains: is this what Varadkar actually thinks of us?

What Varadkar doesn’t seem to understand is that very few people in Ireland now have no difficulty with lambasting the church for its real or perceived sins and failings (and bishops are included in that) but attacking the local priest is for many a step too far.

Not that priests are not criticised. We are, constantly. And sometimes by our own parishioners. But for others, it’s a no-no.

While the church has lost much or most of its authority in Ireland, and while criticism is devastating and ongoing, at local parish level there is still huge respect for, appreciation of and solidarity with the local priest.

And that’s why Varadkar’s flippant comment has been so devastating.

Over the last few decades, as priests watched television documentaries forensically dissecting the child abuse scandals and as we read the terrible detail of the Dublin report, the Ferns report, the Cloyne report and others, the nightmare question for priests was that as we walked to the altar to say Mass that weekend was: “After what they’ve read in the papers or seen on television, are my parishioners wondering whether I too am an abuser?”

What the Taoiseach seemed to be implying in the Dáil was that this might well be true.

Inevitably Fianna Fáil will make hay on this. The gap between the two main parties is so narrow that even a slight shift will ease Fianna Fáil into the lead and leave Fine Gael in the confidence-and-supply role after the next election.

What the Taoiseach’s remarks have achieved is that they will awaken and give a focus to the “sleeping giant” of traditional Catholicism.

The reality is that the marriage equality referendum and the abortion referendum were carried only because Catholics in their thousands voted for them.

But the reality too is that most of the roughly one-third who voted against them were Catholics – and they, along with many Catholics who voted for it, weren’t at all impressed, for example, by the cheering in Dublin Castle for an abortion regime in Ireland.

The difficult truth for Varadkar is that while the new, inclusive Ireland where the marginalised are being brought into the centre has the support of many Catholics, many see the current demonisation of Catholicism as an unfair price to pay for it. And they have votes too.

As Ivan Yates commented on his radio programme (and he knows a thing or two about elections) those Catholics unhappy with the Taoiseach’s loose talk about their priests will be waiting for him in the long grass at the next general election.

While many people admire Varadkar for his ability and, not least, for the new Ireland that is being created on his watch, as I do, it was disappointing that in the Dáil chamber he descended to the mocking and stereotyping of Catholic priests, who have more than most borne the heat of the day.

1 Johnny Depp: Ex-wife or friend defecated in bed in ‘fitting end’ to marriage, court hears
2 Monster or machine? Everything we know about coronavirus after six months
3 Brightest comet of the century visible in Irish skies for the next week
4 Pat Leahy: Fianna Fáil acting like a circular firing squad
5 Man tried to steal cars while high on crack and holding chihuahua
Real news has value SUBSCRIBE