We Yazidis understand the forces of hatred that threaten civilisation 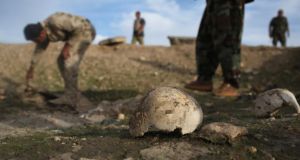 Persecuted Yazidis: Kurdish peshmerga show what they say is a mass grave of more than 50 Yazidis killed by Islamic State in Sinjar in 2015. Photograph: John Moore/Getty

Wednesday, April 19th, is New Year’s Day for the Yazidi community, one of the oldest cultures in the world.

Yazidis are an ethnoreligious group based mainly in Iraq but with emigrant populations in Europe, North America and Australia. Yazidi beliefs, which predate Christianity and Islam, have over the centuries been continually misunderstood, leading to the persecution of followers, most recently in the attempted genocide by Islamic State.

God, or Huda, is for Yazidis a force that demands neither adoration nor subservience and exists in every part of the universe. Yazidi culture is tolerant of other faiths and traditionally provides women with greater equality. It has no specific requirements about what women can wear, and they are free to choose a partner. Although dowries are traditional – the custom seems to have been adopted from surrounding cultures – unique protections for women include the rule that a husband who abandons his wife may be automatically divorced and even banned from remarrying in the Yazidi faith.

Because Yazidism rejects the concept of hell, graveyards are places to honour family ancestors. For New Year’s Day Yazidi women gather in cemeteries to celebrate and share food offerings, with dance and music for the spirits of the dead, the living and those yet to be born. Protecting the environment and the fertility of the earth is a primary focus. Symbolic gifts are prepared, especially around the New Year, to draw the attention of Tawûsê Melek, the equivalent of an archangel in Christianity, to ensure that the earth remains fertile for the year ahead.

For Yazidis, Tawûsê Melek, also known as Peacock Angel, is symbolised by vivid colours, such as those of the rainbow, and through the multicoloured painting of eggs and the wearing of colourful clothing.

Yazidi emphasis on personal freedom and tolerance, and on Tawûsê Melek, has led to great misunderstandings, including allegations of devil worship. Unfortunately these have been accompanied by many atrocities. The latest assaults began in August 2014, when Islamic State, or Isis, slaughtered more than 5,000 Yazidi men, including teens and the elderly, and enslaved a larger number of women and girls. The youngest boys were abducted to be indoctrinated in hatred; girls were used as sex slaves.

These were not random acts of war. Isis declared that it wanted to wipe out our religion. Hundreds of thousands of Yazidis fled their homes, initially to Mount Sinjar, without food or water in scorching heat. They subsequently became refugees, in the nearby region of Kurdistan, in Europe and in North America.

In August 2015, a year after the assault on Mount Sinjar, Zainab Hawa Bangura, the United Nations’ special representative for sexual violence in conflict, reported that “first-hand accounts . . . confirm systematic sexual violence, particularly against Yazidi women and children aged between eight and 35 years”.

In June last year the Independent International Commission of Inquiry on the Syrian Arab Republic, established by the UN’s human rights council, reported that “genocide has occurred and is ongoing” against the Yazidi community.

There is an urgent need for the world to defend the rights of minorities in the Middle East. All minority groups, religious or secular, including Christians, Kakians and Sabians, are at risk of persecution. It also includes any Muslim who rejects the Isis interpretation of Islam.

The Yazidi experience of ongoing and systematic persecution provides us with an acute understanding of the forces of intolerance, hatred, atrocity and genocide that threaten civilisation worldwide.

Part of the solution requires international initiatives. Last October the German chancellor, Angela Merkel, said that she may support a protection zone in norther Iraq. Ireland is one of the countries best placed to provide effective support for such an initiative, through a UN force or related international agreement, particularly for any post-Isis settlement.

More generally, people of all faiths and none must show their rejection of bigotry and intolerance and of those masquerading behind the veil of religion while seeking to promote hatred and division. Let’s remember the words of the great pacifist leader Mahatma Gandhi: people who exploit weaker nations, or weaker men, drag down not only themselves but mankind also.

1 Costa living: ‘Move home to Ireland? I’d hate it’
2 When the RIC opened fire on a crowd in Ennis during the Clare grain riots
3 Portraying Sinn Féin as a dangerous party is a political strategy
4 Anti-Irish bigotry in Britain has not gone away
5 Steve Coogan: ‘Come Out, Ye Black and Tans is two fingers to the British’
Real news has value SUBSCRIBE