Green Party was part of government that signed up, without any apparent economic analysis, to an unachievable target 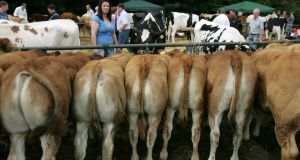 Cattle are a significant source of green house gas. “Every euro we will now spend purchasing compliance, which displaces productive investment from our economy to other economies and which could be useful to us in achieving our 2030 targets, is a result of the decisions taken in 2009.” Photograph: Frank Miller

Climate change is the greatest global challenge for this and future generations. Each one of us has a role to play in meeting it head on if we are to achieve the transformation that will be required to enable us to transition effectively to a low carbon and climate resilient future. The scale of the challenge we face is underlined by the latest emissions figures released this week by the Environmental Protection Agency (EPA).

On the 15th of March, I published a Draft National Mitigation Plan (NMP) for public consultation. This represents a hugely important first step by this Government in the development of Ireland’s first statutory NMP, enabling transition in what will be a long journey with many difficult and complex elements to consider along the way. The draft Plan has been met, unfairly in my view, with criticisms focusing mainly on four issues that I would like to address now.

1. Ireland will not come near its 2020 EU target of 20per cent emissions reductions.

The first point to be made is that any real change process begins by fully recognising the reality of the current situation. This is what the plan seeks to do. According to the EPA projected emissions for 2020 indicate that Ireland’s emissions at that stage could be in the range of 4 to 6per cent below 2005 levels, with the likely outcome closer to 4per cent. While this partly reflects our reduced investment capacity over the period of the economic downturn, the principal driver of the shortfall is that the target itself was misinformed and not consistent with what was achievable on an EU wide cost-effective basis. The Green Party was part of a Government that signed up in 2009, without any apparent economic analysis, to an unachievable target. While this was the highest target given to any Member State, the Green Party was at the time pushing to raise it to 30per cent.

2. Ireland will need to purchase compliance with its 2020 targets.

This is a direct consequence of what can be characterised as economically reckless decision making in 2009. Subsequent European Commission analysis has indicated that a 7per cent emissions reduction would have been a cost-effective 2020 target for Ireland. Every euro we will now spend purchasing compliance, which displaces productive investment from our economy to other economies and which could be useful to us in achieving our 2030 targets, is a result of the decisions taken in 2009.

3. There is an absence of leadership in the draft National Mitigation Plan.

This perspective represents a very superficial conception of what constitutes leadership. The draft Plan fully commits to achieving a competitive, low carbon, climate-resilient and environmentally sustainable economy by 2050. It also includes an approach to carbon neutrality in the agriculture and land-use sector which does not compromise Ireland’s capacity for highly efficient sustainable food production. Experience from across the EU and wider OECD countries shows that such a fundamental transformation is difficult, takes time and requires engagement and collaborative leadership across the entire of society. The draft NMP and the National Dialogue on Climate Action represent this approach to leadership. There will be difficult decisions to be taken, including how we transition away from peat-powered power generation while creating sustainable alternative jobs for the affected local economies. But these decisions must be evidence-based and just. It is too easy, without any analysis, to call for unattainable targets to be enforced on society.

Such an approach, masquerading as leadership, will at best achieve nothing, but more likely be economically damaging and unfair on people and undermine our ability to bring people with us on the road to a carbon free economy. All we need to do is to look to the support which Donald Trump received in the presidential election.

4. The plan is short on concrete actions.

This is simply not the case. There are a list of actions in place and under consideration, including their mitigation potential, presented for each of the sectors: electricity generation, the built environment, transport and agriculture. In particular, I find it bizarre that the commitment to undertake further analysis and pilot schemes received a negative reception. Such an evidence-base is essential to underpin effective policy design and ensure that scarce resources are not wasted. Recent experiences with the UK’s Green Deal and NI’s Renewable Heat Incentive have surely taught us this, though it is a lesson that those who privilege rhetoric over reality will ignore.

At the outset I stated that facing reality was essential to achieving meaningful change. As a society we face an enormous challenge in decarbonising by 2050. We have not yet, nor could we have, developed sufficient measures to take us to 2030. But we can succeed. The first National Mitigation Plan represents an initial step to set us on a pathway to achieve the level of decarbonisation required. It is a work in progress reflecting the reality of where we are in our decarbonisation transition. The Plan is a living document, accessible on my Department’s website, which is continually updated as ongoing analysis, dialogue and technological innovation generate more cost-effective sectoral mitigation options. I invite you to respond to the public consultation which closes on April 26th and to be part of the National Dialogue on Climate Action over the coming months. This is a journey we can only undertake successfully by working together.

It is the task of politics to bridge the chasm between global challenge and national responsibility, and between Ireland’s obligation and every single citizen’s responsibility. It may be a tired truism that you can’t change the world. On climate change, it is a pressing fact that the world will not change without you.

I will facilitate the collective leadership required, and to ensure that just decisions are taken on the basis of evidence. It is time we moved beyond the hand-wringing sermonising of the past to real and constructive engagement with communities.

Denis Naughten is Minister for Communications, Climate Action and Environment