We should celebrate 1916 ideals, not Rising deaths

Proclamation is still our mission statement 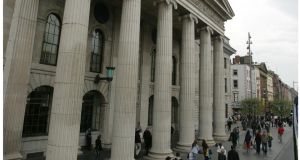 The GPO in Dublin. ‘The 1916 Rising arose out of a long process, with cultural elements as its beginning. The idea of a republic has long been within the Irish nation.’ Photograph: Alan Betson

The idealism and vision of the 1916 Revolution has been parsed and explained in terms suitable for western culture, where physical power and central governance is the main tenet.

Irish indigenous culture has been based on the opposite – non-centralised, with authority by cultural means rather than by physical force; where the poem is more potent then the bullet and reputation outlives the physical.

Aspects of the cultural movement of 30 years leading to the Rising have frequently been misrepresented and unaccounted. It is a bit like teaching music using the language of the medic or the blocklayer. The concepts and the vocabulary belong to two different sets or cultures. The idea of “blood sacrifice” – the very concept and thesis of the 1916 Rising – is adrift to understanding.

By using the language of power by military action and force – the winner takes all and maintains his station by force thereafter, that language assigns the concept of “moral” victory or the idea of “failing wonderfully” to explain 1916 today.

The 1916 leaders knew that they would be beaten and would die. They were about establishing and affirming a concept, an idea, a vision. In their language, the military action was the necessary trauma to impinge on the universal consciousness of the time.

You could say it was in the same way that a surgeon uses a knife but the cutting of the knife does not define the operation he is undertaking.We should celebrate their ideals, not their death.

I believe we should adopt the term “nation” to mean the “peoples” and not the land. Thus the Irish nation is spread all over the world and in many jurisdictions. Wherever an Irish person is, they abide by the rules of that jurisdiction in which they reside. But it is their identity that binds them to their view of life and the world.

A case of “Give unto Caesar . . .” etc. There is no one capital in such a nation, no centre, no overriding authority. But there are ideas/concepts such as home, heritage, history, relationships – a culture. The Irish nation’s homeland is the island of Ireland.

The 1916 Rising arose out of a long process, with cultural elements as its beginning. The idea of a republic has long been within the Irish nation. The origins of communism can be traced, through Marx, back to west Cork and William Thompson.

His observations and experience of Irish culture – the indigenous value system awoke in him the concepts of commune / community / communism. The original system attached importance also to a spiritual element that is mistakenly attributed to Catholicism today. It emphasised the ideas of communal sharing – the feeding and sheltering of the stranger, the empathy with the loser, the attributing of great power to the word, whether in poem or song.

These concepts override and trump physical power in Irish culture, but are assigned to minor roles in the list of priorities of western culture where power and security, control, and organisation are of higher importance. We must read the 1916 Proclamation again. It is our “mission statement”. It was composed by poets and “communists” and teachers and spiritual people.

The National Theatre, Amharclann na Mainistreach, should produce a major piece of commemorative theatre firmly and confidently rooted in our culture. Irish playwrights have been to the fore for many years. Let us remind the nation of this. It should not be for the privileged cognoscenti and the tourist alone.

Put serious art (not token exhibitions) in places of power rather than the usual habitat for such “precious” artefacts. Get the creative out of the galleried ghetto it is locked in. People need to see our art as a major part of us and not just the preserve of the rich, wealthy and the weird.

Our nation’s spiritual flow is a sluggish slurry of negativity and ill-informed bandwagoning in recent times. We must call to all churches and denominations and beliefs on the island to take a specific week and to turn the nation towards spiritual energy, to at least turn their eyes and ears towards that flow and make a start on clearing its murky waters.

Even non-belief is a form of belief. They should all stay within their own patch rather then a mish-mash of well meaning humbug. Let each partake with their flock with the deepest most meaningful touching of their spiritual touchstone. Anything not awash in humility should be recognised as part of the occasion.

Our President and Army represent our idealism and our compassion to help others in time of distress. They are custodians of our nation. We should reaffirm that mien. Other nations’ culture and armies have a purpose to cause distress to others – their enemies. The nobility of our soldiers’ actions in peacekeeping missions, their general conduct while abroad, has always made us proud of them.

This celebration of our independence should reaffirm this noble role they play and try to steer away the current persistent push towards their assimilation into the European army, which is a force-based model. We have never invaded another country. Those soldiers, doctors, nurses, teachers and all our extended family who have dedicated and given their lives to helping others around the world, should be commemorated with a specific memorial in the middle of the people’s public place – the middle of O’Connell Street or such.

Our instinctive indigenous culture, like our Proclamation, has always placed our children as our most cherished aspect in life and they are our future. Some evocative and imaginative pageant on a grand scale, and televised, would be appropriate. There should be something of the Irish indigenous consciousness to awaken their consciousness.

A communal voluntary project, in co-operation with all the nation’s schools and teachers’ unions, would encompass participation and performance in one major national gathering. Each school could choose their element from a central co-ordinated script. But no imported concepts of our “Dreamtime” should be used for this event.

Techniques and skills of course, but the storyline must be purely indigenous otherwise it will not ring true and it will not serve its purpose. This time we are “Linn Féin” and will look across the circle at each other and recognise each other without the need of any one else’s approval or disapproval. We are no longer “post colonial”.

Most of the effort will be voluntary and will entail a lot of begging for resources and help. But that, at least, is a lot easier than revolution and founding a nation. Count me in, and if you are up to it, count yourself in also. But please, beware the Takeover Boys. Fionn Mac Cumhail shafted Gabhal Mac Mórna – a trait that is virulently strong in the Ireland of today. Shysters and self-promoters should not be allowed to this party.

We must remind ourselves of who and what we are and what it means to have self-determination. We are a nation. We should act like the independent confident, generous, good-hearted, inclusive, creative and spiritual nation, rich in culture and language, which our founding mothers and fathers envisaged. That would be the greatest way we could honour them and their memory a hundred years later.

1 Minister resigns over Dominic Cummings’ Covid-19 lockdown trip
2 The great unlocking: Top holiday destinations welcome back tourists
3 What Courtney Love did straight after she left 1980s Dublin
4 We are ‘sale agreed’, but can we go back with a lower offer?
5 Working from home: New costs, new stresses and little relief
Real news has value SUBSCRIBE