More than half of Ireland’s total emissions are generated by just two sectors: transport and agriculture 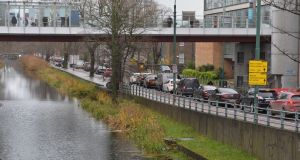 Negotiations on the formation of a government hit a road bump this week with the Green Party’s “red line” insistence that any new administration would have to sign up to at least a 7 per cent annual reduction in emissions, which is more than twice the target of the current climate action plan.

Fine Gael and Fianna Fáil have responded positively to the Greens’ proposals, agreeing there is “now just a decade to . . . halt the warming of our planet and to save our natural world”. The details, they add ominously, need to be “teased out”.

The Fianna Fáil-Fine Gael response letter also pointed out that in 2019, the report from the Joint Oireachtas Committee on Climate Action “demonstrated the cross-party consensus that exists for strong climate action”.

There is a clear concern among the larger parties that pursuing the much more aggressive route of curbing emissions by 7 per cent a year could lead to threats to jobs and might “increase levels of poverty”, especially in rural Ireland.

Is this concern justified?

More than half of Ireland’s total emissions are generated by just two sectors: transport and agriculture. Decades of transport policy that fetishises the ownership of private cars while encouraging urban sprawl and long commutes makes this difficult to reverse.

The Greens’ demand for a major shift in government spending towards public transport and quality cycling is primarily about rebalancing a distorted policy. Electrification of all public transport as well as rapid phasing out of petrol and diesel cars as electric vehicles become affordable will speed this transition.

Would such a move increase poverty? Very unlikely. The cost to many working families of having to run one or even two cars simply to get to work, school etc is crippling. High quality public transport would leave most people better, not worse off. Also, every car on the road in Ireland is imported, meaning billions of euro leaving our economy annually.

Reform of agriculture is as much a political as a technical challenge. A 2017 European Parliament report found that Irish agriculture produces more CO2 per euro of output than any other country in the EU, due to the dominance of dairy and beef farming.

A decisive shift towards a resilient, less polluting and more ecologically sustainable agricultural system with a focus on food security on this island is now needed. Farmers must be properly financially incentivised towards a land stewardship role. This would entail a major expansion of organic agriculture and away from today’s intensive low-margin commodity production model.

Genuine reform of the agri sector will be strongly resisted by beef processors and multinational dairy PLCs who profit from the current system, but it could be a lifeline to ordinary, especially younger, farmers.

A rapid greening of our energy sector with the aim of using domestically produced renewable electricity to both warm our homes and power our transport, businesses and industries is eminently achievable.

Damaging subsidies identified by the CSO include taxes foregone on kerosene, gas and aviation fuel. The zero rate of VAT on fertilisers is also listed, as well as the €500 million annual cost of subsidised agricultural “green” diesel.

While there are real costs associated with greening the Irish economy, these ignore the fact that we already pay massive subsidies to some of our dirtiest industries. Reforming and rebalancing this would free up huge amounts of money for investing in retrofitting, public transport and cycling as well as clean energy initiatives.

The Green Party’s 7 per cent number has not just been plucked out of the air. The United Nations Environment Programme’s Emissions Gap report found that even if all commitments made under the 2015 Paris Agreement on climate change are honoured, average temperatures will still rise by a calamitous 3.2 degrees later this century.

Global greenhouse gas emissions must fall by 7.6 per cent a year, every year in the decade to 2030 to avoid catastrophe, with even bigger cuts in rich countries such as Ireland. A graver concern is not that 7 per cent is unachievable, but rather, that it may be wholly inadequate.

This week, the Dutch government announced a series of radical measures to cut emissions, following a supreme court ruling that climate change threatened human rights. Holland is slashing coal burning, discouraging concrete use in home building, cutting the size of its cattle and pig herds, while investing heavily in household energy saving. These and other steps will save eight million tonnes in emissions this year.

As the Dutch example shows, once we grasp the existential nature of the climate emergency, transformative change is not just possible, it is unstoppable.