Dramatic increase in support for Greens and significant recovery by Labour 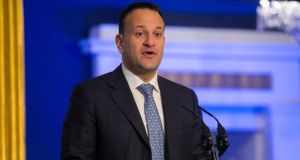 Taoiseach Leo Varadkar. Fine Gael won 20.7 per cent of the votes cast in the recent byelections, a drop of one point on its general election performance in the four constituencies. Photograph: Gareth Chaney/Collins

Contrary to immediate impressions the outcome of last week’s byelections showed very little change in the level of support for the three biggest parties in the Dáil since the last general election. What it did show was a dramatic increase in support for the Greens and a significant recovery by the Labour Party.

When the results of the four byelections are aggregated and compared with the outcome in the same constituencies in 2016 the stability of the vote won by the three biggest parties is remarkable. Fine Gael won 20.7 per cent of the votes cast last Friday, a drop of one point on its general election performance in the four constituencies.

1 Gardaí investigating four-lane motorway sulky race
2 Woman sues over catching Legionnaires’ Disease in luxury hotel spa
3 A Russian cruiser with ‘cannibal rats’: What other ‘ghost ships’ could be out there?
4 Grave concern in North over London’s new immigration rules
5 Dublin schoolboy (14) appears in court charged with rape
6 Martin tells party government may not be formed until April
7 At least eight shot dead in German town of Hanau
8 Fine Gael should swallow its pretend humility
9 Person claiming to represent ‘ghost ship’ owner comes forward
10 ‘If all the immigrants go back, who will work in the meat factories and do the crap jobs?’
11 Jewish council dismayed at Sinn Féin TD’s ‘unacceptable’ tweets
12 Council to refuse applications for Airbnb-style short-term Dublin lets
13 Galway development could transform skyline with 21-storey tower
14 Would you kill one person to save five? Depends if you’re a millennial or not
15 Planners probe Dermot Bannon’s garden bath den
16 Fianna Fáil names team for formal government formation talks
17 DUP pleads with UK to reduce salary threshold for migrant workers coming to North
18 Expert tips: A dentist on how to have perfect teeth
19 Jim Mansfield Jnr denied permission to attend mother’s birthday party in Spain
20 Love Island tribute to Caroline Flack hides the truth
21 I’m happy I went vegetarian. I have no desire to eat meat again
22 Irish backpackers in Australia can extend visas to help bushfire recovery
23 Ireland keep same line-up but Bono and Paul O’Connell join backing band
24 I’m worried about my neighbour’s new ‘shed’ and what he intends to use it for
25 Syria would be better off had West intervened directly in war
26 Miriam Lord: Photo-ops give way for occasional talks
27 ‘Exposure doesn’t pay bills’: What artists say about freebie culture
28 How many numbers begin with a 1? More than 30 per cent!
29 Paraic O’Donnell: MS is meticulously destroying me. I am being unmade
30 The Irish Times view on the UK’s migration rules: crude and self-defeating
31 The gadgets that can make travelling a bit more enjoyable
32 Catholic Church records may be inspected over GDPR concerns
33 Firm behind luxury Dublin rentals to appeal short-term let ban
34 Walk for the Weekend: Rambling on the white sands of Inishbofin, Co Galway
35 Attempt made to set fire to vehicles outside home of QIH director’s relative
36 How is UK changing immigration system and how will it affect Ireland?
37 Store manager unfairly dismissed for hugging staff members awarded €15,000
38 Newton Emerson: Martin and Varadkar must set out terms for Sinn Féin
39 How can I view my dead brother’s will if I’m not the executor?
40 Netflix has revealed its most-watched content. You might be surprised
Real news has value SUBSCRIBE