US is powerless in the face of North Korean missile tests

At a recent military parade, North Korea displayed several missiles at a time of heightened tensions with the United States. Here's a closer look at what some of them are designed to do. Video: New York Times 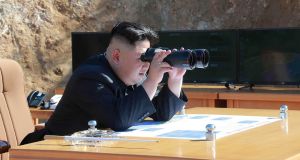 The North Korean regime claimed on Tuesday that it had conducted its first test of an intercontinental ballistic missile (ICBM), and that the test had been a success. The missile was capable of reaching “anywhere in the world”, state TV reported.

Although Pyongyang’s claims have not been independently verified, officials in Seoul and Washington will be alarmed by the test, which offers more evidence that North Korea is moving closer to its eventual goal of possessing a nuclear-tipped missile that could strike the US mainland.

Such an eventuality would radically change the diplomatic dynamic and ratchet up pressure on the Trump administration to respond – remember that the US president has not ruled out a military response to serious provocations. It would also force the United Nations to rethink its approach to the hermit state.

An ICBM is a missile launched by a land-based system that is intended to carry nuclear payloads. The most significant difference between an ICBM and other ballistic missiles is its greater range and speed – enabling countries to strike exceptionally distant targets with minimum warning.To qualify as an ICBM, a missile must have a minimum range of 5,500km (3,400 miles).

What are experts saying about the North Korean claims? Data released by North Korea on the missile’s range and height roughly concurs with reports compiled by Japan and South Korea, although the US military had earlier claimed that the test involved an intermediate-range missile.

There is general agreement that this was Pyongyang’s most successful missile test since its ballistic missile programme gathered pace in the late 1990s. Less convincing is the North’s claim that the missile can reach any target in the world.

John Schilling, a missile expert at the 38 North think tank in Washington, estimates it will take until at least 2020 for North Korea to be able to develop an ICBM capable of reaching the US mainland, and another 25 years before it will be able to build one powered by solid fuel.

South Korean officials have said North Korea can mount a nuclear warhead on a medium-range missile capable of striking Japan and South Korea, including US military bases in those countries.

Much of the North Korean regime’s domestic legitimacy rests on portraying the country as under constant threat from the US and its regional allies, South Korea and Japan.

To support the claim that it is in Washington’s crosshairs, North Korea cites the tens of thousands of US troops lined up along the southern side of the demilitarised zone – the heavily fortified border dividing the Korean peninsula. Faced with what it says are US provocations, North Korea says it has as much right as any other state to develop a nuclear deterrent.

Six months in to his presidency, Donald Trump is struggling to articulate a coherent policy towards North Korea, except to say he has dispensed with the sanctions and isolation – known as strategic patience – pursued under Barack Obama.

Trump invested heavily in China’s ability to use its diplomatic and economic clout to persuade North Korea to abandon its missile and nuclear programmes, but that approach has so far failed to pay dividends.

He has also threatened to use force against the North in response to serious provocations, but has not specified what constitutes his “red line”, or what form military retaliation might take. Any indication that the US was to resort to force would alarm South Korea and Japan.

To complicate matters, at his weekend summit in Washington with the South Korean president, Moon Jae-in, Trump agreed to leave the door open to dialogue with North Korea “under the right conditions”.

Can anything be done to rein in North Korea’s nuclear ambitions?At this point, the obvious response is no. A realistic answer to this question has evaded diplomats, nuclear experts and world leaders for years. Obama left the White House with the Korean peninsula in an even more perilous situation than when he arrived eight years earlier.

A pre-emptive strike against North Korea’s nuclear facilities would almost certainly be met with immediate retaliation that could cause huge casualties in South Korea and possibly Japan.

The North’s demand that it enter into bilateral talks with the US, with a view to winning security guarantees from Washington, appears highly fanciful, given its missile tests and the rhetoric from the White House.

The realisation may also be dawning in the US that the faith it has placed in China’s ability to talk sense into Pyongyang was misplaced.

Beijing’s greatest fear is a crisis in North Korea that creates millions of refugees and ends with South Korean and US forces ranged across its border with North Korea.

As long as that remains the case, North Korea knows it can test Beijing’s patience and still emerge unscathed.