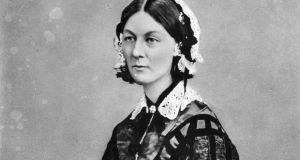 The conflict between the Russian Empire and the United Kingdom, France, the Ottoman Empire and Sardinia took its name from the fact that most of the fighting, including the battles of the Alma, Balaclava and Inkerman and the siege of the Russian naval base at Sevastopol, took place on the peninsula jutting out from the Ukraine into the north of the Black Sea.

It was the first major engagement for the British since Napoleonic times, and the army, led by generals who had not seen active service, was badly clothed, provisioned and supported behind the front.

It was also the first major war since the invention of the electric telegraph, which allowed correspondents to file up-to-the-minute copy.

One of them, Dublin-born William Howard Russell, who wrote for the London Times, did not confine himself to reports about the battles.

He also sent vivid stories about conditions in the hospitals in Scutari, on the Asian side of the Bosphorus, about 400 miles to the southwest of the Crimea, to which wounded and sick soldiers were transported, often covered in dirt and wrapped in blankets.

On October 12th, 1854, he wrote that the public would learn with feelings of surprise and outrage that there were not sufficient preparations for their care and that men were left to die in agony, unheeded and shaken off.

One of the surprised was Florence Nightingale, the superintendent of a private hospital for gentlewomen.

She was born on May 12th, 1820, to a rich Derbyshire couple who were touring Italy and they named her after the city of her birth. Much to their annoyance, she became a nurse, a disreputable occupation that rivalled scullery work on the social scale, and spent time with a Protestant institution near Düsseldorf and with the French Sisters of Charity in Paris.

Now she determined to send female nurses to help the troops and her proposal was accepted by her friend William Herbert, the secretary for war. He appointed her as superintendent of female nursing at Scutari and, crucially, gave her authority to select and dismiss staff.

She arrived in Scutari in November, with a group including 10 Irish Sisters of Mercy based in Bermondsey near London, and established headquarters in an abandoned Turkish army barracks which had been converted into a hospital.

The stench from blocked sewers was overwhelming and the place was so filthy that, as she wrote to Herbert, the vermin, if they had unity of purpose, could carry off the beds on their backs.

Over the next 18 months, she fought a mostly successful battle to introduce hygiene, reorganise kitchens and laundries, employ soldiers as orderlies and obtain such basic items as blankets from the bureaucratic army commissariat. About 125 nurses served under her, including Irish laywomen.

By May 1855, mortality from cholera and typhoid had halved.

While her lasting image is of a kindly lady with a lamp flitting from room to room in the glimmering gloom, an image based on a comment by Russell and a poem by Henry Longfellow, her main contribution was as a manager and organiser who did not brook opposition.

So when 15 Mercy sisters were sent from Ireland to Scutari without her agreement in December 1854, she initially refused to receive them. Eventually she accepted five at the Barrack hospital and sent the others to a new hospital at Koulali a few miles away.

In September 1855, they took over the main hospital at Balaclava, outside her jurisdiction, and remained until the war ended.

This hospital was equally unhygienic and one of the nuns, Sister Aloysius Doyle, wrote in her diary that the droves of rats seemed determined to keep possession.

The relations between the nuns and Nightingale were complicated, not least because of different views about methods of nursing but also because they involved strong-willed people from very different backgrounds.

Bridgeman was a formidable character who had nursed people during the Great Famine and would later run a large school in Kinsale.

Sister Aloysius, the last survivor of the Irish nuns, was decorated by Queen Victoria and wrote her memoirs in 1907, based partly on the pages of the diary which had not been eaten by the rats.

After Florence returned to England she used her new-found fame to promote her ideas on nursing and sanitation, and the training school which she founded at St Thomas’s Hospital in London in 1860 was instrumental in establishing nursing as a profession.

In later life she suffered from a variety of illnesses and was often bedridden but she lived to be 90 and died at home.