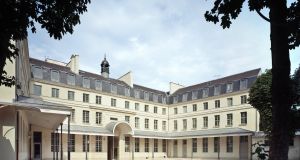 The Irish College in Paris. The college was not spared during the bombardment of the city by the powerful Prussian siege guns.

This year marks 150 years since the Irish College in Paris was turned upside down by the Franco-Prussian War. It all began when the French Second Empire, under Emperor Napoleon III, declared war on the Kingdom of Prussia in July 1870.

Both sides expected it to be a brief affair. Described as “a struggle for mastery in Europe”, the war dragged on for over six months, ending in January 1871. Napoleon III (the nephew of Napoleon Bonaparte) had predicted a swift victory, but surrendered, and was captured at the Battle of Sedan.

He was taken prisoner along with 104,000 French officers and soldiers.

This led to the end of the Second Empire and the establishment of the French Third Republic.

The Prussians thought they could take Paris in three days with their mighty Krupp artillery.

However, the fortifications around the city stopped them in their tracks.

The impressive defences included moats, and walls that reached 10 metres high. Around 400,000 French troops guarded a perimeter that stretched for some 61 kilometres.

The Siege of Paris lasted for over four months from September 1870 to January 1871. During that time, food was rationed, making life difficult for the civilian population.

The Irish College was located in the fifth arrondissement, just around the corner from the Panthéon. It was one of a collection of seminaries that were set up on the Continent to train Irishmen for the priesthood when it was not possible to do so in Ireland.

The Irish bishops, “on the grounds of charity and humanity”, decided to offer the college to the ministry of war as a military hospital for sick and wounded soldiers. A Red Cross flag was put on display outside the college. Beds were set up in study rooms, lecture halls and recreation rooms.

Money was sent from Ireland to help maintain the college and provide for the care of the wounded, while local people and merchants also made donations of money or in kind to the college. According to historian, Justin Dolan Stover, writing in the journal Études irlandaises, these included a horticulturalist who gave two chestnut trees and 100 perennials for the garden.

The college’s courtyard and garden offered recuperating patients a chance to enjoy some fresh air in calm surroundings.

The college was not spared during the bombardment of the city by the powerful Prussian siege guns.

However, although the fabric of the building suffered damage, it seems that none of its inhabitants were seriously injured. All in all, it is thought that around 300 casualties were treated there during the course of the war, with the last of them leaving by mid-March 1871.

The college was renovated in the early 2000s and now houses the Centre Culturel Irlandais, which acts as a rallying point in the French capital for all those who are interested in Irish culture and history. A plaque in the courtyard commemorates the role played by the college during the war.

The College also had a secondary house on the outskirts of the city. Located in Arcueil, around six kilometres from the college, it was used as a weekend retreat and for summer holidays.

During the Paris Commune, which lasted from March to May 1871, the Catholic Church was a target, as they were associated with all the ills of the monarchy. The Communards decreed the separation of church and state. Church property was confiscated, and schools were instructed to cease religious education.

One of the most high-profile incidents targeting the church involved the Archbishop of Paris, Georges Darboy. He was arrested by the Communards and held in prison. He was later executed along with over 20 other clergy.

In Arcueil, the town’s population had been evacuated in advance of the oncoming Prussian troops. The house was ransacked, and looters made off with anything of value that they could carry. Doors, parquet floors, window shutters, and even windowpanes were stripped and taken away. The house was also attacked by French gardes mobiles troops.

In the end, it was said that the various waves of marauders left “only the walls and roof standing”. It was estimated that it would take around 20,000 francs to return the house to its former glory. However, there was a dispute over who should pay for it. As a result, it took years to bring it back to something that resembled its former self.

The house in Arcueil was sold after the Second world war, but there are still some vestiges of the town’s Irish connections to be found in the area. In the local cemetery, a Celtic cross marks the grave where 11 Irish priests were buried between 1859 and 1891.

It must be strange for locals to see quintessentially Irish names, such as Healy, Kelly, Walsh, Cleary, Conway, Slattery, McCann and Fitzgerald, all listed on one headstone in this French graveyard.