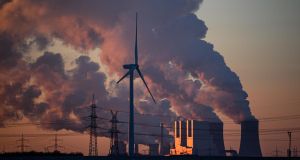 Today’s social contract would expand to take in the environment, health, protection of data, housing and other areas. Photograph: Lukas Schulze/Getty Images

Minister for Public Expenditure and Reform Michael McGrath stated on Thursday that the State will not shrink after the pandemic. Instead, he told us to expect the larger State to continue, and Government commitments to focus on wellbeing as well as economic indicators.

This respect for enlarging State capacity and recognising that long-standing problems such as housing shortages and unequal access to healthcare must be urgently addressed is welcome.

In reality, there isn’t much of a choice. Avoiding austerity was never going to represent a sufficient policy response to the pandemic and its economic fallout. The Government had to show the public that it could implement constructive, effective policy initiatives.

The traditional reliance on shifting policy priorities to win public support may become a casualty of this post-pandemic period. It may no longer be enough to tell the public that the Government will spend more on public services and measure progress differently. This language still reflects a policy approach rooted in “value for money”, expenditure and revenue and, ultimately, acceptable budget deficits.

Instead, politicians in Ireland (and elsewhere) will have to communicate a vision of society and politics separate from economic figures and, critically, how they currently understand leadership, if they want to earn long-term public trust.

The Tánaiste and other Ministers have highlighted financial support for business and the number of jobs they have saved. But they say little about how businesses will be run in the future and their social impact: will wages be higher across the board, will workers have more rights, and will childcare become more available to support women entering the workforce?

Will Ireland protest trade agreements and business practices that undermine climate action and prioritise corporate over public interests? Will valuing public interests translate into a deeper commitment to public good, to a renewed social contract between the Government and its citizens?

Rethinking leadership is critical because the pandemic happened in a period already marked by rising political instability around the world, the visible bravado of authoritarian regimes, the lure of extremist politics internationally, and the growing uninhibitedness of leaders.

If we look at the impeachment trial in the US, we can see how politicians are presenting their vision of leadership and how they want to influence society.

In the short term, the Democrat and Republican politicians who are willing to rebuke the former president are trying to wrestle the narrative of “courageous” and “brave” leadership away from Trump.

The former president had told his vice-president, Mike Pence, that certifying the results of the election did not require courage, saying that instead, “what takes courage is to do nothing [ie not certify the results].” During the Capitol Hill riot, he tweeted: “Mike Pence didn’t have the courage to do what he should have done to protect our country and our constitution.”

Though he has distanced himself from the impeachment process, president Biden’s decision to enact a bold blitz of executive orders and proposed legislation is certainly helping to associate courage with new policy, rather than a refusal to concede an election.

In the longer term, the elected officials in the US who are rebuking Trump are rejecting the influence of the far right on policy and trying to restore functional public debate as well trust in public institutions and politicians themselves.

They are implicitly accusing the Republicans supporting Trump of undermining what the philosopher Hannah Arendt labelled “factual truth”. Factual truth, she wrote, “is always related to other people: it concerns events and circumstances in which many are involved; it is established by witnesses and depends upon testimony.”

Rather than dismiss the experience of others to maintain a political agenda, politicians must recognise that this experience must be listened to first.

Even if distortion of the truth has not become as prominent in Ireland, the Government should claim the courage to move beyond the economistic language of employment, deficits and GDP.

It should declare that it will gauge future policies not just by their impact on wellbeing and equality but also on the trust the public holds in institutions, citizen engagement in the public sphere and politics, and individual confidence in the choices they have in their life trajectories.

The Government should renew the social contract characteristic of mid-20th-century Western governments, which legislated for social protections and worker rights and actively supported the expansion of the middle class.

Today’s contract would expand to take in the environment, health, protection of data, housing and other areas. By pursuing this approach – or a longer-term, broader perspective than reliance on annual budgets and quantitative indicators – the Government would be embracing a vision of a society where individuals and families feel secure, despite the turbulence of our era, because they know the State is behind them.

Shana Cohen is the director of Tasc, the think tank for social change