Una Mullally: Water debacle embodies all that is wrong with Irish politics

Which is the worst kind of politics; establishing a company so flawed it was doomed to failure, or using water charges for populist gain? 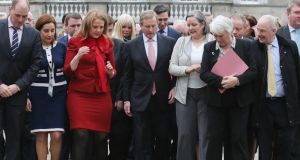 “So when our shiny new, rehydrated government salutes the press and public from the plinth of Leinster House soon, remember that they are not waving, but drowning.”

Good afternoon, Mr. Can. Have you met my foot? How would you feel about being kicked down the road another while? The government negotiations have given us a window into the petty and petulant politics Ireland specialises in, but whatever your thoughts on Irish Water, pausing water charges and creating an even bigger mess out of the hames the water issue had become is really something else.

Small battles are always preferable in Irish politics. It’s better to fight on a tiny battleground than survey the field at large. So forget about a creaking health service, the housing crisis, a homelessness crisis, forget about the big picture or the long term. Fianna Fáil needed a win and to return to their speciality of politics that is reactionary, short-term and recklessly populist, and Fine Gael needed to be back in power. By any means necessary.

Fine Gael was not waterproof. They weren’t even water resistant. The porousness of the power struggle played out behind closed doors by a couple of parties devoid of a mandate or of electoral enthusiasm. I suppose one of the reasons people were not exactly up in arms about politicians not being able to form a government for three months is down to no one wanting any of the lot we’ve now been gifted actually in there governing.

You can argue for water charges in principle (although there is little point, given how emotive an issue it has become), but you can’t argue for how Irish Water was established, and the subsequent meltdown of its organisational structure, billing and charging process, meter installing, PR, consultancy, and so on. Even the logo created a farce. The thing was a mess from the beginning. In principle, updating the water supply network and charging people for a resource in an efficient and reasonable manner is worth an argument, but the practice was a national joke, then a national disgrace, then irreparable. Well done everyone. Arguing on principle won’t get you very far. Principles in Irish politics are very often hypotheticals. Instead we got the inability to organise a piss up in a brewery approach, an approach the last government was no stranger to.

Water charges beget a movement, and they became a lens through which other austerity measures were filtered. But what of those other measures? What of the savage cuts to the most vulnerable people, services and organisations? If those who led and partook in the water protests see this as a victory, it also has to be seen as a superficial one. This is not the levee bursting, it’s the finger in the dike. It’s difficult to see this “win” Fianna Fáil has achieved in pressing pause on charges being a precursor to any further change. That’s our lot now. The utility bill will stop until its another pointless process begins, a “commission”, an “all-party Dáil committee”, a “Dáil vote”, a “whatever”. Water charges became shorthand for austerity, but in the end, it’s the charges that will go and the austerity that will remain.

What happens to the organisation, and the people who work for it? Is Irish Water just going to sit there, like an electronic voting machine gathering cobwebs in the corner? Where will the hundreds of millions Irish Water needs - and was meant to accrue via charges - to upgrade the water supply infrastructure come from?

Fianna Fáil has got one up on Fine Gael, and the byproduct prize is Kenny for Taoiseach again. It’s hard to decide which is the worst kind of politics; establishing a process and company so flawed that it was doomed to failure, or using water charges as a political bargaining chip for populist gain. Neither are admirable. So when our shiny new, rehydrated government salutes the press and public from the plinth of Leinster House soon, remember that they are not waving, but drowning.

4 Gordon D’Arcy: Where is Ireland’s progress under David Nucifora?

5 Kathy Sheridan: Young Shinners don’t get to decide what is in past