Una Mullally: The Nokia 3310 is coming back and I want one

The 3310 evokes a time when everything was changing 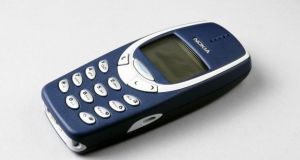 Old-school Nokia - streamlined and slick and back on the market

I remember exactly where I was when I first saw a Nokia 3210. It was 1999 and I was sitting in a home economics classroom in school when one of the cool girls – oversized gold earrings, marijuana-leaf pendant, free gaff aficionado, always the first to have Buffalo shoes and those Adidas tracksuit bottoms with the snap-off buttons all the way up to the waistband – showed her new phone to her friend. It was one of the most beautiful pieces of design I had ever seen.

What was so striking almost to the point of disbelief was that the phone didn’t have an antenna. It was streamlined and slick, grey but with what was almost a glitter effect on the casing. I may have been phone-less at the time, but there and then I made a silent commitment to myself: I am getting a 3210. I saved my pay from my after-school job in Centra and got the phone.

As always with technology, what felt cutting edge then is nostalgic now, but it’s not defunct. The news that HMD Global is set to relaunch the 3310, the phone that succeeded the 3210, and is thought to be one of the best and most reliable mobile phones ever, will probably make a lot of people part with the new €59 price. There is a growing market for “festival phones” – mobile phones that won’t smash when dropped, are cheap, and have long-lasting batteries, which makes you wonder how sophisticated and useful smartphone technology really is. We replaced grainy screens with HD ones and SMS with instant messaging apps, but a good machine is always going to stand the test of time and a great one will come back around eventually.

The 3310 was groundbreaking, not just for its reliability or its ring tone composer or the “Snake II” game but also because it allowed for expanded personalisation, elements of which feel archaic now but were groundbreaking then. You could change the wallpaper on the phone, with many opting for those cartoon eyes staring out from the screen. I bought wallpaper from a subscription company that read “TEQUILA” on the screen. Classy. You could change the look of your phone with Xpress-on covers – front and back – and so they became the new pencil cases, all moulded in the likeness of the identities we wanted to project. In college, I skipped to a Nokia 3410, a dinky baby-blue phone that was equally indestructible.

The 3310 will garner attention among those on a nostalgia trip but it also evokes a time when everything was changing.

Like most Irish teenagers in the 1990s, the gulf between my obsession with technology and the cash to actually buy it was wide. Nokia 3210s and 3310s were the mobile phones to accompany an era of dial-up modems, Napster, ICQ, Encarta, and a generation that began to retreat into the family PC after school, navigating digital technology at a time when coding or even computer classes were nonexistent. It was the initial migration to a digital existence that is now the default, a time of exploring the virtual spaces of chatrooms and message boards.

A generation gap not seen since rock’n’d roll was opening up. Children became tutors to their parents, explaining word processors and printers.

Over the past few years I’ve seen the signifiers of my teenage years appropriated by those 10 or 15 years younger than me. It’s the inevitability of cyclical trends which you only begin to notice in your 30s as you depart youth culture and observe younger people trying to attach edgier or ironic meanings to fashion and musical statements that were decidedly mainstream in my teens. With that too comes an affinity with the technology of the era, so the Nokia 3310 might also tap into a customer base “tracing the contours of someone else’s memories” as the New Yorker music writer Hua Hsu described Jamie xx’s nostalgia for rave.

Nokia’s rebirth also interrogates how useful smartphones are as they excel at almost everything apart from the basics (battery life and durability). High scores in “Snake” have been replaced by multibillion-dollar gaming empires. The convenience and simplicity of 3310-era phones have been replaced by the privacy and surveillance concerns of smartphone technology that knows when you move, tracks your location, and trawls your communications for data to better target ads at you. As smartphones get bigger and more expensive, the minimalism and cuteness of late 1990s and early 2000s phone design is oddly desirable, long after we threw them into the back of drawers. So don’t be surprised if that iconic ringtone starts to re-emerge on bus journeys when the 3310 springs back to life.