Una Mullally: Taoiseach needs to wake up to gender equality in Government

Although Varadkar likes to see himself in vein of Macron and Trudeau, he has fallen at first hurdle they bounded over 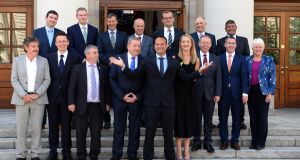 Women for Election, the advocacy and training group that empowers women to enter politics in Ireland, is currently running a #MoreWomen crowdfunding campaign on Indiegogo where they are seeking to raise €50,000 to train 300 women ahead of the 2019 local elections. Alongside other political leaders, Leo Varadkar appears in their campaign video where he demands, “More diversity . . . more women.” It’s one thing to make a video with a soundbite, but another to actually practice ensuring diversity and female representation when you actually have the power to do so.

How great would it have been if the Taoiseach followed up that sentiment by pursuing gender equality in his cabinet and amongst his junior ministerial appointments? Instead, Varadkar chose just three women among 19 Ministers of State. Six of the 34 Ministers in Government are women.

The “qualification” criteria so often cited by those seeking to question the merit of having women represented at senior levels in politics or any other arena, or the “best person for the job” obfuscation, appears this time to be a moot point, given that the Taoiseach rewarded his supporters, with promotions for John Paul Phelan, Brendan Griffin, Jim Daly, Michael D’Arcy and Ciarán Cannon, all very much #TeamLeo.

Although Varadkar likes to see himself in the vein of Emmanuel Macron and Justin Trudeau, he has fallen at the first hurdle they bounded over. Both Macron and Trudeau have prioritised – and followed through on – gender parity at cabinet level. Previously, sidelining women or treating the lack of representation of women in politics with apathy, was seen as the natural order. But attitudes have changed, and gender balance and the representation and participation of women in politics in Ireland is viewed as vital. Slip up, and the critics will be waiting. So it’s no wonder that the Taoiseach’s honeymoon ended faster than the running time of Love Actually, with women’s groups and fellow politicians – as well as the prevailing social media winds – criticising Varadkar’s male-heavy picks.

It’s also important to count the women behind the scenes. Varadkar’s well-executed campaign to become Taoiseach was also typified by its maleness. His key team members included Eoghan Murphy, Nick Miller, Brian Murphy, Philip O’Callaghan, Alan Holmes, John Carroll, and the Taoiseach has since hired Patrick Geoghan, the Trinity College historian, as a speechwriter and researcher. The lone high-profile female adviser during the campaign appears to be Olwyn Enright, the former Laois-Offaly Fine Gael TD. Perhaps it is in this context that mistakes such as the male gender bias at Cabinet levels both senior and junior occurs. When it comes to gender balance, men are less likely to count, because they are rarely excluded.

The Taoiseach’s appointments also happened in a post-quota political landscape, where the progress of women in politics is seen as so necessary that it requires intervention. The quota argument is over, and it is broadly accepted as a way to affect change instead of waiting until the next Ice Age for gender parity.

Still, the figures are pretty dismal, even though they’re our best yet. One in five TDs are women. In the last general election, women’s representation in the Dáil increased from 16 per cent to 22 per cent. As Orla O’Connor of the National Women’s Council said, “Only 18 women have been appointed to Cabinet since Countess Markievicz became minister for labour in 1919. This is one woman less than the current number of Ministers for State.”

The good news is, change, when facilitated, can happen really quickly. When Women for Election ran their first campaign school in 2013, out of 20 participants, 16 ran in the 2014 local elections and a remarkable 12 were elected. Since then, two of those original participants have become TDs, two have become Senators, and one has become an MEP.

In the last general election 40 per cent of elected female TDs came through the Women for Election training programmes. The organisation has trained 1,000 women to enter public life. Women for Election identify the ‘5 Cs’ that hold women back from entering politics; cash, candidate selection, culture, childcare, and confidence. But there’s also another very obvious obstacle: men who hold power who are capable of affecting huge change just not bothering.

If the Taoiseach wants to be perceived as a change-maker, reinvigorating his party and Irish politics in general, then he needs to actually be part of that change, instead of repeating a pattern that feels so familiar in its staleness.