Una Mullally: It is not ‘binary’ to focus on women’s achievements

#FreeWomen was not meant to exclude anyone, but just draw attention to sidelined women 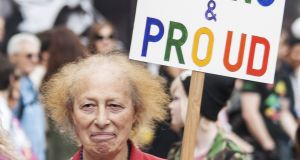 ‘My attitude towards what a “woman” is has to be inclusive, because who on earth gets to decide it isn’t?’

Mantras and philosophies aside, I have only ever lived by two practical rules when it comes to work. The first was told to me in my early 20s by a newspaper editor, while in the pub, discussing midweek hangovers: “You can go out early and get up early. Or, you can go out late and get up late. But you can’t go mix them up.” Going out late and getting up early for work doesn’t allow you to function. And going out early and getting up late is basically sloth. My other practical rule is “Don’t read the comments”. But while scrolling through a piece I wrote online last week about a hashtag I started, #FreeWomen, I stumbled across one. I started the #FreeWomen hashtag in response to a conversation myself and some friends had on International Women’s Day about the Freedom of the City of Dublin, an honour that in 140 years has awarded 75 men and five women, and just one Irish woman. Insane. A male friend suggested that the Lord Mayor’s office and Dublin City Council just give the Freedom of the City to 70 women this year to immediately redress the balance. Fantastic idea! So I started tweeting suggestions using #FreeWomen, and loads of other people followed suit.

The one comment that struck me was incredibly mild compared to some of the abuse I get. In fact, it wasn’t abuse at all. It was, “Why is Una so binary? No thought for trans people and the gender fluid. Its [sic] just wimmin wimmin wimmin. She needs to get with the current year.” I would assume the inclusion of trans people and “the gender fluid” was implicit. But that comment reveals a narkiness that lives online, that even when you’re doing something positive, someone will criticise you.

I thought of that while reading Caitlin Moran’s new book Moranifesto last week. In a chapter titled, “I propose not having opinions on women for, say, five years”, Moran writes, “Currently, every time a woman in the public eye does something, she doesn’t do it just for, and as, herself. She does it on behalf of 3.3 billion other women, too. She is seen to represent her entire gender – a putative Team ‘The Birds’ – in a way men just aren’t. When a bloke screws up, he’s just some bloke screwing up. When a woman makes a hash of it, however, she’s a cultural signifier, and basis for a million polarised debates.”

In a previous chapter, titled (sarcastically, by the way), “Women keep f**king things up”, Moran writes about how people get shirty when one single woman doesn’t end up addressing all the problems women face, “Understandably over-invested in any woman who does begin to succeed,” Moran writes, “we load a million, hot, desperate expectations on to them, then enter a weird world where we become immensely peevish at a thousand things they haven’t done – energetically attacking wholly phantom, imaginary wrongs – rather than taking a moment to be joyful over the stuff that, against all the odds, they actually did do . . . it really is ok if a woman comes along and does just a little bit of pioneering.”

There is a difference between intersectionality and everything all at once. It goes without saying that “woman” and “man” are now almost shorthands in a society that is expanding its mind and body to definitions and interpretations and desires and identities and ideas of gender. Any opposition to this seems to me rigid and immature, like football fans rioting against other football fans just like them, from towns like them, wearing jerseys like them, who played keepy-uppies as kids all day like them. But identity rivalry is one of humanity’s quirks. Many people spend their lives pointing out the differences in people who are remarkably similar, and the closer we get in similarity, the more heated those disagreements become. Just ask Fianna Fáil and Fine Gael.

My attitude towards what a “woman” is has to be inclusive, because who on earth gets to decide it isn’t? These people who shout “You can’t be a that! I say you were born as a this!” are the types who threw apple cores from the bus window at passing goths on the way home from school. People who worry about gender and sexual identity are scared of a world where the cis, straight, white, rich male isn’t at the top of the pile, that a position of dominance though embedded and repeatedly re-enforced in history and culture is suddenly so precarious that it could be flipped at any moment, like that time nutritionists decided maybe we shouldn’t be eating five kilos of carbs a day and tweaked the food pyramid a little. Bread, by the way, didn’t implode. Nobody forgot about bread. It’s okay bread, you’re still here.

Maybe #FreeWomen should be #FreeEveryone, but what I was talking about was the historical – and indeed contemporary – sidelining and overlooking of women and their achievements. It’s not being “binary”, it’s just trying achieve a very small thing, and secretly hoping that other people set out to achieve small things too.