Varadkar election a strange one for LGBT people 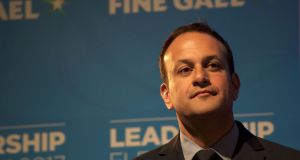 Leo Varadkar: A gay taoiseach is actually a very big deal indeed, but Varadkar’s politics are relatively rare among those who marched for his rights. Photograph: Paulo Nunes Dos Santos/AFP/Getty Images

Leo Varadkar becoming taoiseach-elect is a strange victory for many LGBT people whose politics are rooted in solidarity, equality and standing up for minorities. The attitudinal change towards LGBT people in public life is remarkable.

The Irish media and public were at pains to talk about how Varadkar’s sexuality “didn’t matter”. It was only when the international media arrived on the scene that it was trumpeted as a big deal. “No, it isn’t!” Irish people cried, “we’re totally grand with this now!” Fair play to us.

It’s very obvious that a gay taoiseach is significant for a country that passed marriage equality in 2015 and next year will celebrate the 25th anniversary of the decriminalisation of sex between men, back when Varadkar was 13.

But Varadkar is also evidence of how broad a church the LGBT community is. For a community that fought for its rights in radical ways, Varadkar is one of the more conservative forces in Fine Gael, with some almost comical right-wing moments in his political career – suggesting that unemployed immigrants should be deported despite the fact that he is the son of one, or wondering whether prisoners should pay for their food and “accommodation”.

In the pursuit of the good PR and compatible communications that becoming taoiseach requires, Varadkar has silenced some of those alarming views, but the mask does slip now and then. There is a reason the reaction from the LGBT community was so muted.

A gay taoiseach is actually a very big deal indeed, but Varadkar’s politics are relatively rare among those who marched for his rights.

What people don’t tell you about progress is the odd, rudderless feeling that occurs in the aftermath. LGBT people shout about marriage equality and the Gender Recognition Act not being a panacea regarding the day-to-day realities of many LGBT people, but it is inevitable that after achieving something, a lull follows.

Right now, many familiar landmarks of LGBT community in the Republic are disappearing in the rearview mirror. In terms of organisations, the Gay and Lesbian Equality Network, Glen – a policy and strategy NGO founded in 1988 – is no more, and under investigation by the Charity Regulatory Authority.

Glen’s approach sometimes divided the community and other activists, particularly when the organisation pursued civil partnership, but its work across many areas as well as the funding it secured will be much missed in the LGBT sector.

In terms of recognition, this year the Galas LGBT Awards ceremony – founded in 2009 and honouring those in the LGBT community – was not held. In terms of physical spaces, The Front Lounge, a much-loved and long-standing gay bar, recently closed and its LGBT clientele departed.

It is interesting to read Brian Sheehan – formerly of the Yes Equality campaign and Glen, and now of the Social Democrats – write on Facebook: “While our politics and vision for the country are very different, I know that Leo’s election says something profound about the journey in and of Ireland over recent decades . . . At the launch of Glen’s strategic plan by then taoiseach Bertie Ahern in 2005 (itself a huge moment) Kieran Rose said that we should aim to make being LGBT ‘unremarkable’ where any young LGBT person could grow up happy and aspire to become taoiseach.”

At the moment, I am the independent chair of the oversight committee on the National LGBTI+ Youth Strategy, and the ultimate goal of the strategy and the change it will hopefully affect is that all young people irrespective of their sexuality or gender identity have the same opportunities as their non-LGBTI+ counterparts, and that the barriers society erects to fulfilling their potential be removed.

At the same time, striving to be “unremarkable” is an odd goal, in a way. The young people I’m meeting and working with are nothing but remarkable. But I suppose there has always been an intrinsic conflict within LGBT activism: do we seek to be subsumed by the mainstream, or do we seek to change it?

How do we erode the prejudicial attitudes and adverse reactions towards LGBT people while ensuring those identities are acknowledged and valued? How do we take on and interact with the rights and experiences everyone else has enjoyed for so long, while maintaining the unique attributes, attitudes, points of view, experiences and ways of living that LGBT people carved out without those rights? Difference can be acknowledged in a positive way. There is nothing exciting about pursuing homogeny in society.

As the LGBT community fights for the rights of young people, tackles a HIV crisis, and wonders how we can support an ageing LGBT demographic, a large part of the energy that politicised young LGBT people in Ireland is being channelled into campaigns for the repeal of the Eighth Amendment.

Varadkar, who can often come across as awkward and distant, seems to have a problem connecting with the public on emotive issues such as abortion. Some of his comments on reproductive rights have been confusing and unhelpful. But he should also know that his own identity is intrinsically intertwined with women’s rights.

Feminists fought for Varadkar to be able to live an open and accepted life as a gay man. They fought in the courts, on the streets, in the Dáil and Seanad, on the airwaves, and on the doors, for people – despite their differences – just like Varadkar.

Hopefully we can look forward to having a taoiseach who is a “big deal” for everyone’s rights.