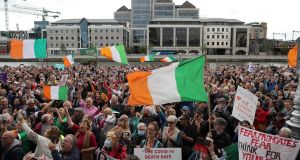 An anti-lockdown and anti-facemask protest which took place in Dublin on Saturday. We have seen what happens in other countries when distrust in an ‘establishment’ is weaponised by people who prey on a collapse in accountability and in turn use it to bolster their own interests and desire for power. Photograph: Nick Bradshaw

Whatever happens next, this Government will find it extraordinarily hard to claw back public trust. They’ve brought it on themselves, and the succession of unforgivable scandals, stupidity, terrible communication and confusing messaging, along with an aura of incompetence, is just not acceptable. If the Government is both coach and management, and the public are the players, then they’ve lost the dressing room.

The Clifden golf dinner event feels like a scandal with a very Fianna Fáil flavour, and smacks of the deluded and detached sessions of the party’s Galway Tent-era of gormless hedonism.

7 WHO warns of ‘catastrophic moral failure’ in Covid vaccine distribution

9 ‘The social worker said: Were two seconds of pleasure worth it for all this?’

11 Taxing pandemic payment ‘could be unconstitutional’

17 Charles Byrnes’ licence withdrawn after runner ‘nobbled’ with a sedative

19 Gary O’Hanlon: ‘Guys are supposed to be fine about miscarriages. But I wasn’t’

20 Gerry Thornley: IRFU must grasp this opportunity for club game

21 The SNP and Scottish nationalism

23 House prices on the rise again as market defies forecasts

24 Will special needs classes reopen? ‘There are times we find it very hard to cope’

26 Kenmare hotel not ‘at your service’ until June, says John Brennan

31 Joe Biden’s presidential inauguration: Where can I watch, and what are the key moments?

32 The Secret Teacher: Our belief that Leaving Cert is exemplary is at dizzying heights

35 Tadhg Furlong set for return to rugby after lengthy absence

36 Marianne Faithfull on nearly dying of Covid-19: ‘My lungs are still not okay. I need oxygen’

37 Kamala Harris is about to make history. So is her ‘big, blended’ family