Every time you saw Prince appear on stage, there was pure joy emanating 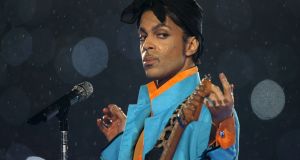 The perception was that Prince was brilliantly nuts, an absolute eccentric in every facet. Photograph: Mike Blake/Reuters

I was 10 or 11 when I saw the video to Gett Off, the lead track from Diamonds and Pearls, on TV late at night in my grandmother’s sitting room in Galway. Sinéad O’Connor’s cover of Prince’s Nothing Compares 2 U had come out the previous year and made her a bigger star than she already was, but I didn’t know then that Prince had written it.

After Gett Off played, the video for Madonna’s new song Human Nature came on. Back to back they were a revelation, a window into a mythical sexual world with weird, intimidating, alien characters. A few years later, Baz Luhrmann’s Romeo and Juliet breathed new light into the 12-year-old When Doves Cry, with Quindon Tarver singing.

Gradually, the access points to Prince’s music kept opening up: the melancholy Little Red Corvette, the camp drama of the intro to Let’s Go Crazy, the obvious epic of Purple Rain, hearing 1999 when it sounded a long way away. It’s still a long way away, but in the other direction. Prince was always just there, a totem people referenced but no one could imitate.

Great artists inspire, they make you reimagine, they shock and awe. But more than anything else, they bring joy. Every time you saw Prince appear on stage or listened to his music, there was pure joy emanating and being received. You could talk about Prince’s perfect voice or his brilliant, everlasting songs, but he was at his most arresting as a performer.

As a guitar player, Prince was one of the greats. One of his most stunning performances was a guitar solo at the Rock and Roll Hall of Fame in 2004, playing While My Guitar Gently Weeps. Prince came on stage and delivered a performance that made the other members of the makeshift band – including Steve Winwood, Tom Petty and Jeff Lynne – look like amateurs.

It was one of those Prince performances that truly felt as though he was channelling magic, as if some kind of creative feedback loop and cypher were distilling, filtering and rechannelling his own epic creativity and virtuoso genius until it exploded outwards.

Only great art creates this kind of stunning hypnosis, and watching Prince play guitar was like staring into a Dalí painting, or reading Maya Angelou, or putting the needle down on Kind of Blue. This is what it sounds like . . .

Sure, it’s easy to be nostalgic about rockstars from times of yore. But while Prince made contemporary and futuristic music that was also classic, he eschewed the embarrassing oversharing engaged in by so many of today’s pop stars.

When an icon dies, the internet is flooded with old footage and links to interviews and songs and live concerts. But with Prince, you have to own his music to understand his catalogue. He fought hard against the copyright infringement and “sharing” culture of the internet; there’s little of Prince on YouTube aside from a couple of sanctioned live performances, and only a few songs on Spotify.

This kind of attitude, now viewed as enigmatic in an era where audiences demand their music for free or for as little as possible, was also born from an acute understanding of what it really means to own one’s art.

When Prince wrote “slave” on his face in protest at Warner Bros’s treatment of him, he was standing up for artists being screwed around by major labels everywhere. Refusing to be marketed or owned by a label, Prince changed his name to a symbol. But he was already an icon. Eventually, in 2014, he would win that fight, owning the rights to all of the music he recorded on the label.

Prince had been on my mind a lot lately. When it was recently announced that he was writing his memoirs, I wrote a piece about some of the best and most bizarre Prince stories .

The perception that Prince was brilliantly nuts, an absolute eccentric in every facet – not least his dress sense, where he managed to promote a visceral and sexual masculinity while wearing high heels, ruffled shirts and glittering suits, and which added to his brilliant, wacky, purple aura genius. The endless stories, crazy anecdotes, and the idea that Prince refused to be anything other than Prince only adds to a sense of one-offness.

And now that one-off is gone. It hurts to keep losing the one-offs.

On Thursday night, some friends and I headed to Tengu, a Japanese bar in Dublin that the club night Lumo calls home. The Lumo guys had spontaneously decided to open and play Prince all night. Clubbing is as much about community as anything else, and there we waked Prince.