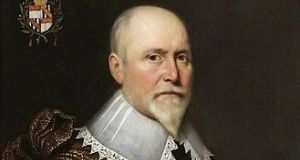 The Lord Deputy of Ireland, Viscount Grandison, ordered a sworn inquiry, which began in Galway in early February 1621

Exactly 400 years before Brexit, a French ship sailed into Galway Bay in mid-winter 1620-21 and caused an international dispute that vexed the diplomatic missions of the leading European powers for the next several months.

Ambassadors of France and Spain became embroiled in a stand-off with the Privy Council in London and the Lord Deputy in Ireland after the ship’s officers were detained in Galway and a number of Galway merchants were taken hostage in France in response.

Bad weather forced the merchantman St Andrew into Galway Bay when she was returning to Normandy, laden with wine, silk, salt, hides and elephant teeth, after a 22-month voyage to central and South America, via West Africa.

The ship was badly damaged on rocks, losing its sails, masts and anchors, but only one sailor was seriously injured and much of the cargo was salvaged. The mayor of Galway, Andrew Lynch, suspected that the ship was a man-of-war or a pirate vessel and he detained the crew and impounded the cargo pending instructions from the Lord Deputy of Ireland, Viscount Grandison.

A sworn inquiry, ordered by the Lord Deputy, began in Galway in early February 1621. It heard that the vessel was authorised by the Lord High Admiral of France to make war on Spaniards, but that it had seized goods from ships and territories that were not Spanish. It also heard from some Galway merchants that the lieutenant on the St Andrew, Pieres de Salla nova, had been in command of another French man-of-war that had robbed a Galway-bound ship of cargo valued at over £800.00 two years previously.

The Lord Deputy sent a report of the opening statements to the Privy Council in London and he asked that copies be sent to the ambassadors of France and Spain. He ordered the detention of Lieut de Salla nova and the captain and senior officers, but allowed the rest of the crew to be released. He also suggested that some of the impounded cargo be auctioned to compensate the citizens of Galway for the cost of the salvage and the removal of the wreck from the channel leading to the harbour.

Two Galway men told the resumed inquiry that they had seen Lieut de Salla nova with sword drawn lead a raiding party from a French man-of-war that stole cargo worth £800.00 from their ship Gift of God as it returned to Galway from Lisbon in August 1618. John Leonard, a merchant, testified that de Salla nova was the commander of the ship whose crew robbed the Gift of God of commodities and goods valued at between £800 and £900, belonging to various Galway merchants.

Morirtah O’Connor, a sailor, said that the raiders took their clothes and anything else they thought fit. He said that de Salla nova held his sword over him and forced him to open the chests.

The mayor of Galway asked the St Andrew captain, Andrew Manveriges, to allow the sale of some of his impounded cargo to defray the salvage costs and the expenses incurred in accommodating and feeding his crew. Capt Manveriges declined and instead complained to the French government, which ordered the arrest of five Galway merchants who were visiting Normandy.

The stalemate continued throughout the summer. The mayor wrote again to the Lord Deputy, pointing out that the French officers were being well treated and were free to move around Galway, when they could legally have been treated as pirates and imprisoned or executed. He asked the Lord Deputy to get the authorities in London to talk to their French counterparts and release the Galwaymen detained in Normandy.

In September, Lord Grandison wrote urgently to the Privy Council in London, saying that the captain and lieutenant had lied to the inquiry and calling for the immediate release of the Galwaymen and their goods. He also sought a guarantee of safe passage for five other Galway merchants who feared being detained with their cargoes in Dieppe.

No further correspondence on the episode is preserved among the Irish State Papers in the Public Record Office in London, according to the late Galway historian Prof MD O’Sullivan, writing in the Journal of the Galway Archaeological and Historical Society in 1933. She suggested that Lord Grandison’s September letter prompted the Privy Council to make the necessary diplomatic representations to France to release the Galway merchants, but she acknowledged that realpolitik probably dictated that the French officers in Galway be freed and allowed to retain most of their cargo.