Tories have abandoned pretence of impartiality on North 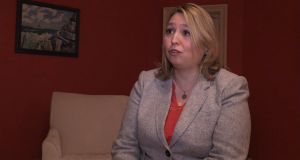 The British prime minister, Theresa May, puts on a special voice when she’s reassuring the DUP about “our precious, precious union”. We all know she only does it to hold on to their precious, precious votes. However, it is now clear she is dangerously willing to pay any price for the highly equivocal loyalty of that party.

She has already alienated the majority of Northern voters, those who voted to remain in the EU, over Brexit. Now she has shown that her government will trample on the independence of the legal system, jeopardise trials and inquests, and grievously insult the families of children, women and men bereaved at the hands of her security forces.

It was the DUP’s Emma Little-Pengelly who asked the question in parliament on Wednesday. With so much focus on the 10 per cent of people killed by the security forces during the Troubles, she demanded, what was the government going to do for the other 90 per cent, those she called the “innocent victims of terrorism”.

As it happens, Little-Pengelly’s father was convicted, in France, of involvement in a loyalist gun-running plot. Alongside the late Ian Paisley, Peter Robinson and Sammy Wilson, he donned the red beret of the Ulster Resistance Movement.

He denies he actually imported arms. The DUP distanced itself from the group after it came out that it had imported weapons. But when it gets exercised about terrorists, the DUP is referring, by and large, to the IRA. It is left to others to point out that mounting evidence of collusion between the security forces and loyalist paramilitaries skews all the figures.

The context of Little-Pengelly’s question is the impending announcement by the Public Prosecution Service about whether or not paratroopers will face prosecution over the role of the regiment on Bloody Sunday in Derry in 1972 when 13 unarmed civilians were murdered. Secretary of State for Northern Ireland Karen Bradley thanked her for asking. Killings during the conflict by soldiers and police were “not crimes”, she said. These people were “acting under orders and under instruction and fulfilling their duties in a dignified and appropriate way”.

While she was speaking, an inquest in Belfast was hearing from a man who said he had spent the last 48 years trying to forget what he had seen on the day he was shot as a nine-year-old child by a British soldier during what has become known as the Ballymurphy Massacre.

The Butler brothers were shot at as they tried to run away across a field. They saw soldiers flinging injured people and bodies into the back of a Saracen. One teenager was crying.

“One of the soldiers pulled out a gun and said F**k up, you c**t and shot him once or twice towards the chest. There was no sound from him after that,” Edward Butler said in evidence.

Relatives of Joan Connolly who had come out of her house to search for her daughters, sobbed as they heard harrowing evidence of her final moments after she was shot in the face. Those soldiers were from the Parachute Regiment. Had the regiment been disciplined in any way for its actions that day, its soldiers might not have felt free to go on a similar rampage in Derry six months later – on what will henceforth be known not as Bloody but as Dignified and Appropriate Sunday.

Bradley has already won herself a reputation as the stupidest and most inept secretary of state anyone can remember – she laughingly boasted that when she was given the role she had not known that nationalists did not vote for unionists, and vice versa.

When the British government signed up to the Belfast Agreement in 1998, it committed itself to 'rigorous impartiality'

Now she has blundered into undoing the tentative healing which began with former prime minister David Cameron stating in 2010 that the killings were “unjustified and unjustifiable”. She has also inadvertently lent her support to those who argue that it is various decorated gents including Gen Sir Mike Jackson who should be in the dock since they were the givers of orders and instructions.

More shocking even than her outrageous comments was the fact that while the SOS (oh the aptness of that acronym!) was speaking, her Tory colleagues on the benches behind her continued to chat among themselves, as oblivious to what Bradley was saying as they were to the television cameras.

At one level, it is just another demonstration of how little the parties at Westminster care about the North. For years now, MPs have been racing each other to the exit doors whenever it comes up. Bradley rushed through Northern Ireland’s budget last week to benches that were almost empty.

Report after report shows that the North is likely to be disproportionately badly impacted by Brexit, particularly if there is no deal. That hasn’t stopped the Conservatives, particularly the extreme Brexiteers who are favourites among the DUP, from flirting with that outcome.

But it is worse than that. When the British government signed up to the Belfast Agreement in 1998, it committed itself to “rigorous impartiality”. In her desperate bid to hold on to power at any cost, the prime minister has abandoned all pretence of this. As for the profundity of Bradley’s belated apology – we already have irrefutable evidence that this secretary of state is deeply, deeply shallow. Is it reassuring when a senior politician says, “I want to be very clear – I do not believe what I said. That is not my view”? It is not.