Time to end outmoded relationship between church and State

I have been part of a grand collusion that has existed between the general public, church and State for the provision of educational, healthcare and other essential public services 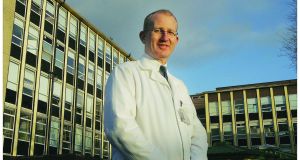 Prof Chris Fitzpatrick: “Ireland is a different country than it was and this needs to be reflected in our public services and institutions.” Photograph: Alan Betson

In the late 1960s, I was an altar boy in a convent on Dublin’s northside. There was a school, an orphanage and a laundry on the same site. At Mass, the nuns used to sit (and kneel) in a long row of single pews in order of seniority. On either side, separated by highly ornate partitions, were the laity and the orphan girls. Holy Communion was served to the nuns, the laity and the orphans – separately and in that order. One of the “perks” of being an altar boy was getting a part-time job in the laundry – I was twelve years old. Many of the laundry workers were middle-aged single women who had been in the orphanage since they were babies.

I attended the local Christian Brothers school. Abuse, in my case, was limited to the physical variety and there was plenty of it: six of the best with the leather on each hand for looking around you in your desk, a kick in the shins when you were expecting a box in the ear.

I, however, owe my education to the Christian Brothers. In those days, for selling match programmes for the GAA on All-Ireland Final day, schoolboys were often allowed to squat behind the goalposts for the duration of the game – for free. I clearly remember how we used pity the boys in the Artane Boys’ Band who led the teams around on the pre-match parade, thinking that under their long stockings there were probably marks from the cane and leather. Everyone knew what was happening to them – once the doors were shut closed.

Being very devout, I was also an altar boy in the local Capuchin friary. During the 1970s, I played on a football team run by a charismatic friar who had a reputation for miracles. Some said he was a saint. When I read the Ryan Report many years later, I found out that, unbeknownst to me, he had been a predatory paedophile; other boys, tragically, were less fortunate.

I was inspired to study medicine as a direct consequence of being a patient and being looked after by caring doctors and nurses – including the Sisters of Charity.

In the 1980s, as a medical student in a Dublin maternity hospital, I presented case histories of unmarried mothers using a pseudo-Latin euphemism: “This is Mrs O’Reilly, she is inupta”. Many of the young unmarried women were staying in religious-run mother and baby homes that were dotted around the city, some living through the lonely pretence of saying they were working in England – for the sake of saving their families from shame. They would usually come to the end of the antenatal clinics together. They were sometimes given wedding rings in the hospital. Many gave their babies up for adoption. My memory is that they always seemed sad. They lived in a different world to me.

After qualifying, I worked in two religious-run Dublin teaching hospitals. The pill, the coil and tubal ligation were not available. Holy Communion was given out on the wards and Mass was broadcast over the ward intercom.

Later, I went to the UK where, as a conscientious objector, I was not asked to do any abortions. About one quarter of the women having abortions in the hospital were from Ireland – an irony that was not lost on my English colleagues.

Having worked as a consultant for over 20 years in Ireland, I have direct experience of terminating pregnancies in order to save the life of the mother. These interventions have taken place in Irish maternity units long before the recent legislation, in accordance with ethical clinical practice. However, as for women requesting abortion for other reasons, I, like everyone else, have left it to the airlines, ferries and the UK’s NHS and private clinics to deal with this. At a medical conference earlier in the year, I happened to meet an English obstetrician who takes care of a lot of Irish women who travel to the UK for termination of pregnancy. This doctor is a highly compassionate clinician. Her experience of looking after distressed Irish women arriving in her hospital made for uncomfortable listening – as were her reactions when I tried to explain the reasons for this well-trodden pathway.

Like many, my life has been shaped by an education and a healthcare system strongly influenced by the Roman Catholic Church; in the main I have been a beneficiary and I am very grateful for this. I have certainly not suffered as others have.

Like many, I have also been part of a grand collusion that has existed between the general public, church and State for the provision of educational, healthcare and other essential public services, and, as such, bear my share of responsibility for the decisions that we have made – and the ones that we have avoided.

The demographic make-up of this country has changed beyond belief in recent years. Ireland is a different country than it was and this needs to be reflected in our public services and institutions – including in our schools and hospitals.

At the commencement of the 21st century, I believe the time has come to start unpicking the outmoded relationships that exist between church and State, between private and public morality; relationships that are no longer fit for purpose in a modern, secular, pluralist and compassionate European republic.